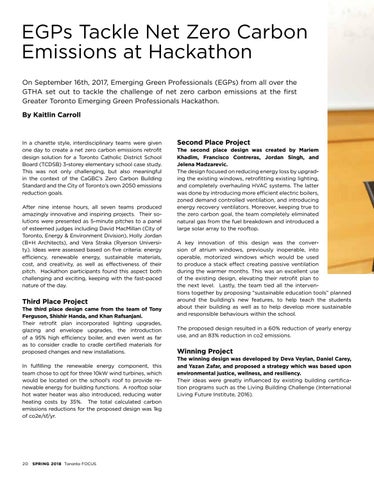 In a charette style, interdisciplinary teams were given one day to create a net zero carbon emissions retrofit design solution for a Toronto Catholic District School Board (TCDSB) 3-storey elementary school case study. This was not only challenging, but also meaningful in the context of the CaGBC’s Zero Carbon Building Standard and the City of Toronto’s own 2050 emissions reduction goals. After nine intense hours, all seven teams produced amazingly innovative and inspiring projects. Their solutions were presented as 5-minute pitches to a panel of esteemed judges including David MacMillan (City of Toronto, Energy & Environment Division), Holly Jordan (B+H Architects), and Vera Straka (Ryerson University). Ideas were assessed based on five criteria: energy efficiency, renewable energy, sustainable materials, cost, and creativity, as well as effectiveness of their pitch. Hackathon participants found this aspect both challenging and exciting, keeping with the fast-paced nature of the day.

Third Place Project The third place design came from the team of Tony Ferguson, Shishir Handa, and Khan Rafsanjani. Their retrofit plan incorporated lighting upgrades, glazing and envelope upgrades, the introduction of a 95% high efficiency boiler, and even went as far as to consider cradle to cradle certified materials for proposed changes and new installations. In fulfilling the renewable energy component, this team chose to opt for three 10kW wind turbines, which would be located on the school’s roof to provide renewable energy for building functions. A rooftop solar hot water heater was also introduced, reducing water heating costs by 35%. The total calculated carbon emissions reductions for the proposed design was 1kg of co2e/sf/yr.

Second Place Project The second place design was created by Mariem Khadim, Francisco Contreras, Jordan Singh, and Jelena Madzarevic. The design focused on reducing energy loss by upgrading the existing windows, retrofitting existing lighting, and completely overhauling HVAC systems. The latter was done by introducing more efficient electric boilers, zoned demand controlled ventilation, and introducing energy recovery ventilators. Moreover, keeping true to the zero carbon goal, the team completely eliminated natural gas from the fuel breakdown and introduced a large solar array to the rooftop. A key innovation of this design was the conversion of atrium windows, previously inoperable, into operable, motorized windows which would be used to produce a stack effect creating passive ventilation during the warmer months. This was an excellent use of the existing design, elevating their retrofit plan to the next level. Lastly, the team tied all the interventions together by proposing “sustainable education tools” planned around the building’s new features, to help teach the students about their building as well as to help develop more sustainable and responsible behaviours within the school. The proposed design resulted in a 60% reduction of yearly energy use, and an 83% reduction in co2 emissions.

Winning Project The winning design was developed by Deva Veylan, Daniel Carey, and Yazan Zafar, and proposed a strategy which was based upon environmental justice, wellness, and resiliency. Their ideas were greatly influenced by existing building certification programs such as the Living Building Challenge (International Living Future Institute, 2016).