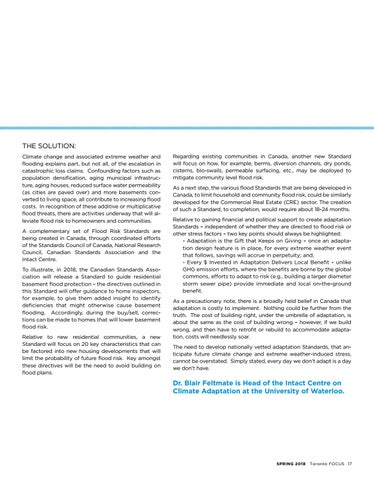 THE SOLUTION: Climate change and associated extreme weather and flooding explains part, but not all, of the escalation in catastrophic loss claims. Confounding factors such as population densification, aging municipal infrastructure, aging houses, reduced surface water permeability (as cities are paved over) and more basements converted to living space, all contribute to increasing flood costs. In recognition of these additive or multiplicative flood threats, there are activities underway that will alleviate flood risk to homeowners and communities. A complementary set of Flood Risk Standards are being created in Canada, through coordinated efforts of the Standards Council of Canada, National Research Council, Canadian Standards Association and the Intact Centre. To illustrate, in 2018, the Canadian Standards Association will release a Standard to guide residential basement flood protection – the directives outlined in this Standard will offer guidance to home inspectors, for example, to give them added insight to identify deficiencies that might otherwise cause basement flooding. Accordingly, during the buy/sell, corrections can be made to homes that will lower basement flood risk. Relative to new residential communities, a new Standard will focus on 20 key characteristics that can be factored into new housing developments that will limit the probability of future flood risk. Key amongst these directives will be the need to avoid building on flood plains.

Regarding existing communities in Canada, another new Standard will focus on how, for example, berms, diversion channels, dry ponds, cisterns, bio-swails, permeable surfacing, etc., may be deployed to mitigate community level flood risk. As a next step, the various flood Standards that are being developed in Canada, to limit household and community flood risk, could be similarly developed for the Commercial Real Estate (CRE) sector. The creation of such a Standard, to completion, would require about 18-24 months. Relative to gaining financial and political support to create adaptation Standards – independent of whether they are directed to flood risk or other stress factors – two key points should always be highlighted: - Adaptation is the Gift that Keeps on Giving – once an adaptation design feature is in place, for every extreme weather event that follows, savings will accrue in perpetuity; and, - Every $ Invested in Adaptation Delivers Local Benefit – unlike GHG emission efforts, where the benefits are borne by the global commons, efforts to adapt to risk (e.g., building a larger diameter storm sewer pipe) provide immediate and local on-the-ground benefit. As a precautionary note, there is a broadly held belief in Canada that adaptation is costly to implement. Nothing could be further from the truth. The cost of building right, under the umbrella of adaptation, is about the same as the cost of building wrong – however, if we build wrong, and then have to retrofit or rebuild to accommodate adaptation, costs will needlessly soar. The need to develop nationally vetted adaptation Standards, that anticipate future climate change and extreme weather-induced stress, cannot be overstated. Simply stated, every day we don’t adapt is a day we don’t have.

Dr. Blair Feltmate is Head of the Intact Centre on Climate Adaptation at the University of Waterloo.