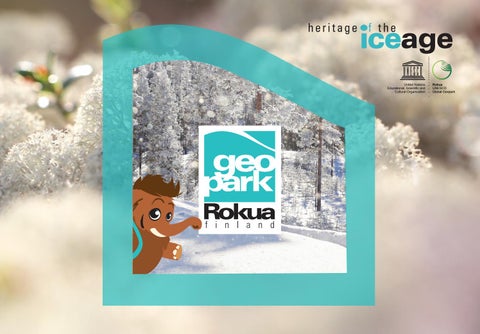 Hello! In this guide we will explore Rokua Geopark together and find out about the Heritage of the Ice Age.

What’s ice? Ice is a solid form of water. It occurs when the tem+ perature drops below the freezing point. 0 °C 32 F When the temperature rises, ice melts. Ice is – found in the ice cover of natural waters, such as in the River Oulujoki, Rokua’s kettle holes and Lake Oulujärvi, and in the snow cover, atmosphere and glaciers. During the Ice Age, Rokua Geopark was covered by a glacier more than two kilometres thick.

Landscape puzzle How the bedrock and life developed

You could think of Rokua Geopark’s landscape as a puzzle. The oldest pieces may have been in the bedrock for billions of years, while the youngest pieces were formed in the bedrock and soil in the last 11,000 years. Grouped by birth and age, these geological pieces of landscape create a story of evolution that reveals how the area received its current features. Rokua Geopark’s oldest gneiss rocks crystallised nearly 2,900 million years ago. The bedrock in Rokua Geopark was born long before dinosaurs, at a time when the only living organisms on Earth were bacteria.

Compared to the development of bedrock, the time human evolution has taken looks paper-thin on the timeline

Pookivaara Hill rises from the water

Rokua Geopark emerges from the ice

1 square = 1 0 0 years How soil developed Over a million years, Finland was repeatedly under a slow-flowing continental ice sheet. The ice sheet transported boulders and created smooth, striated rock formations known as “roche mountonnées”. The melt water stream deposited sand from the Muhos formation into an esker. Moraine ridges were formed on the bottom and edge of the ice sheet, while melting ice blocks created kettle holes in eskers. Rokua Geopark emerged from under the ice sheet between 10,700 and 10,500 years ago. Lake Oulujärvi was cut off from the early Baltic Sea, called the Ancylus Lake, about 9,500 years ago.

There were mammoths in Finland during the Ice Age

Ice blocks melting into the sand

1 sq u are = 100 years Soil development and stages of vegetation Wind carried fine-graided sand from sandy beaches, creating the dunes in Rokua. As a result of land uplift, the River Oulujoki began 9,500 years ago as an outlet for Lake Oulujärvi. In four thousand years, the land uplifted so much that the river channel reached Muhos near the current Pyhäkoski power plant. The tributaries and streams of the River Oulujoki carved deep valleys known as ravines into the sandy soils of the river valley. Peat formation began in wet depressions straight after the terrain exposed from water, and accelerated as climate cooled about 6,000 years ago. The development of channels and mires still continues.

Coastline and the River Oulujoki delta in Muhos

Ravine or a deep valley

Rokua Geoparkâ&amp;#x20AC;&amp;#x2122;s birthstone is gravel dyed brown by iron and formed into rock, known as Kieksi conglomerate, by the Lemmenpolku nature trail

At the end of the Ice Age, the climate warmed up and the ice sheet started to melt. The margin of the ice sheet retreated from Manamansalo to Muhos in about 200 years. The present landscapes began to form when they were under the ice sheet. 12

The River Oulujoki in Muhos

Area covered by the ice sheet

Drumlins under the ice sheet

End moraines accumulated on the edges of melting ice sheet

Kettle holes at the sites where ice blocks melted

Riverbed follows the fault lines in the rocks

Moving glacier has revealed faults in the rocks

Rapids formed by the edges of fault lines

Potholes were created in strong rapids

Flowing water has eroded soil all the way to the bedrock

Rokua Geoparkâ&amp;#x20AC;&amp;#x2122;s plants and animals have changed according to the geology and soil

Signs of Stone Age settlements The oldest artefacts discovered in the area are Comb Ceramic objects. They are more than 7,000 years old and were found in Säräisniemi. Pyhäkoski’s Stone Age dwelling sites are about 6,00–5,000 years old. Some Bronze and Iron Age discoveries have also been made.

Old churches Kainuu’s first church in Manamansalo was burned down in the violent skirmishes of the Russo-Swedish War (1578-1581). Muhos Church was built in 1634, Utajärvi in 1762 and Säräisniemi in 1782. Kalevala rune singers Folk healers and traditional storytellers, known as rune singers, lived in Ahmas from the 17th century until the 19th century. You can find their stories in Kalevala, the Finnish national epic. Emperor’s Road The Emperor’s Road, or Keisarintie in Finnish, was built between the fortresses in Oulu and Kajaani from the 17th century onwards. Tsar of Russia, Emperor Alexander I, visited Lake Oulujärvi in 1819.

Peasant culture Built in the 1750s, Lamminaho House is a type of traditional farmhouse found in the Oulujoki Valley.

Salmon The Oulujoki has been famous for salmon since the 16th century. At the end of the 19th century, the Oulujoki attracted English fishers who were known as “salmon lords”.

Cross-country skiing Rokuanvaara became a popular ski destination in the 1940s. But artefact finds show that people have been skiing in this area for 3,000 years. National park and hiking trails Rokua National Park was founded in 1956 and Oulujärvi Hiking Area in 1993. The first fire guard tower was built in Pookivaara, Rokua, in 1936.

Time Travel Using modern virtual technology, you can discover how Rokua Geopark’s landscapes around Lake Oulujärvi, Rokua and the River Oulujoki have looked like through the ages. You can visit Rokua Geopark’s exhibitions and explore the unique Ice Age Heritage Story. Jump billions of years into the past and see the mountains as they were then, visit a continental ice sheet with a thickness of two kilometres, walk around a Stone Age village, and explore the sceneries of the early 20th century and today. With a VR headset and controller, you can get a realistic experience of the landscape around you, visit the surrounding area, watch how people lived their lives, view objects and perform tasks. The project has been designed by Rokua Geopark, Kajaani University of Applied Sciences, Geological Survey of Finland, the Museum and Science Centre Luuppi. The project has consulted scientists on geology, biology and human cultural history. DOWNLOAD THE FREE MAP APP ON YOUR SMARTPHONE

Explore the Time Travel with the Rokua Geopark mobile app

gather together or acquire an increasing number or quantity of; to pile up

Ancylus lake was a fresh-water lake-stage before the present Baltic Sea ca. 10800 - 9000 BP (before present). It covered the area of the Baltic Sea, and even more. The signs of the lake´s shoreline can be found above 110 metres elevations above the present sea level in Rokua Geopark.

unable to produce plants or fruit; for example sandy soil

something being totally covered under some matter or particles; for example an ice block buried by sand

a very large piece of some substance, for example ice

a narrow space between two surfaces which have broken or been moved apart; for example in bedrock or in glacier

a layering of accumulated matter; used for example to describe process as water transports and accumulates sand

a water drop or spoon like formation created by moving glacier; consist of till

a hill of sand near a beach or in a desert; created by sand which is first transported and then accumulated by wind

A boulder transported by a moving ice sheet or on iceberg floating in water.

A long ridge accumulated by melt waters of a glacier. It usually consists of sand and gravel.

very common mineral in felsic and intermediate rocks like granite

A wave-like shape in a substance. In geology, fold is used to describe a certain structure in rocks.

The strata of the rock having a wavelike appearance.

the way something is naturally made; for example an esker is a formation created by meltwater of a glacier

a large mass of land ice that moves slowly; can be recognized different types like alpine glacier or cirque glacier

Ice which has been under pressure for several years and has been compacted to plastic ice which has only a minimal amount of air inside. Usually demands at least 20 meters of firn and snow above it and 25-40 years.

bedrock outcrop, that is shaped by moving glacier (by glacier erosion and abrasion); other side of the rock is shallow and flat, the other is steep and cracked

A rock type that has re-crystallized in high temperature and pressure, maintaining its solid state. Usually has a striated and folded appearance.

A place, where a block of bedrock has sunken below the surrounding areas, i.e. the Muhos formation

a grey, white, green or yellow plant-like organism that grows on rocks, walls and trees

Litorina Sea was a salty-water sea-stage before the present Baltic Sea ca. 9000-3000 BP. It covered the area of the Baltic Sea, and wide areas of west coast in Finland. The signs of the sea´s shoreline can be found in elevations from 20 to 110 metres above the present sea level in Rokua Geopark.

a stream which begins from a glacier; melt water of a glacier

an area of deep, wet, sticky earth which consist mainly of peat

any plant of the division Bryophyta

A large graben with length of at least 30 km, a wide of 5-10 km and a depth of 1 km in the deepest place. The formation stretches from Muhos to Hailuoto Island and probably even further west. Is full filled with sedimentary rocks.

a large and continuous part of a lake; for example Lake Oulujärvi has two largest open lakes in Finland

The part of a rock formation that stands above the surface of the ground; surface exposure of the bedrock.

a parabolic curve is a type of curve made by an object that is thrown up in the air and falls to the ground in a different place; used for example to describe the shape of some dunes 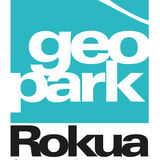