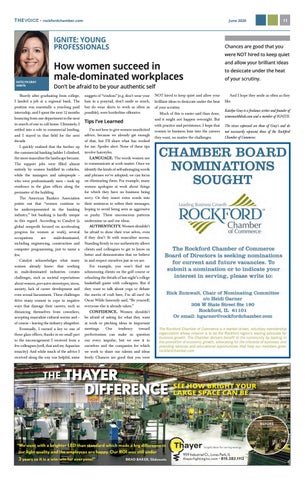 Chances are good that you were NOT hired to keep quiet

How women succeed in male-dominated workplaces

and allow your brilliant ideas to desiccate under the heat of your scrutiny.

Don’t be afraid to be your authentic self

Shortly after graduating from college, I landed a job at a regional bank. The position was essentially a year-long paid internship, and I spent the next 12 months bouncing from one department to the next in search of one to call home. Ultimately, I settled into a role in commercial lending, and I stayed in that field for the next decade. I quickly realized that the further up the commercial banking ladder I climbed, the more masculine the landscape became. The support jobs were filled almost entirely by women huddled in cubicles, while the managers and salespeople -who were predominantly men -- took up residence in the glass offices along the perimeter of the building. The American Bankers Association points out that “women continue to be underrepresented in the banking industry,” but banking is hardly unique in this regard. According to Catalyst (a global nonprofit focused on accelerating progress for women at work), several occupations are male-dominated, including engineering, construction and computer programming, just to name a few. Catalyst acknowledges what many women already know: that working in male-dominated industries creates challenges, such as societal expectations about women, pervasive stereotypes, stress, anxiety, lack of career development and even sexual harassment. These challenges drive many women to cope in negative ways that damage their careers, such as distancing themselves from coworkers, accepting masculine cultural norms and -of course -- leaving the industry altogether. Eventually, I earned a key to one of those glass offices, thanks in no small part to the encouragement I received from a few colleagues (well, that and my Aquarian tenacity). And while much of the advice I received along the way was helpful, some

nuggets of “wisdom” (e.g. don’t wear your hair in a ponytail, don’t smile so much, but do wear skirts to work as often as possible), were borderline offensive.

Tips I’ve Learned I’m not here to give women unsolicited advice, because we already get enough of that, but I’ll share what has worked for me. Spoiler alert: None of these tips involve hairstyles. LANGUAGE. The words women use to communicate at work matter. Once we identify the kinds of self-sabotaging words and phrases we’ve adopted, we can focus on eliminating them. For example, many women apologize at work about things for which they have no business being sorry. Or they insert extra words into their sentences to soften their messages, hoping to avoid being seen as aggressive or pushy. These unconscious patterns undermine us and our ideas. AUTHENTICITY. Women shouldn’t be afraid to show their true selves, even if they don’t fit with masculine norms. Standing firmly in our authenticity allows clients and colleagues to get to know us better and demonstrates that we believe in and respect ourselves just as we are. For example, you won’t find me schmoozing clients on the golf course or rehashing the details of last night’s college basketball game with colleagues. But if they want to talk about yoga or debate the merits of craft beer, I’m all ears! As Oscar Wilde famously said, “Be yourself; everyone else is already taken.” CONFIDENCE. Women shouldn’t be afraid of asking for what they want at work or pitching ideas in important meetings. Our tendency toward perfectionism can make us question our every impulse, but we owe it to ourselves and the companies for which we work to share our talents and ideas freely. Chances are good that you were

NOT hired to keep quiet and allow your brilliant ideas to desiccate under the heat of your scrutiny. Much of this is easier said than done, and it might not happen overnight. But with practice and persistence, I hope that women in business lean into the careers they want, no matter the challenges.

And I hope they smile as often as they like. Katelyn Gray is a freelance writer and founder of womenwithkids.com and a member of IGNITE. The views expressed are those of Gray’s and do not necessarily represent those of the Rockford Chamber of Commerce. 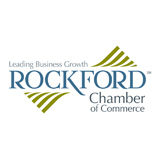