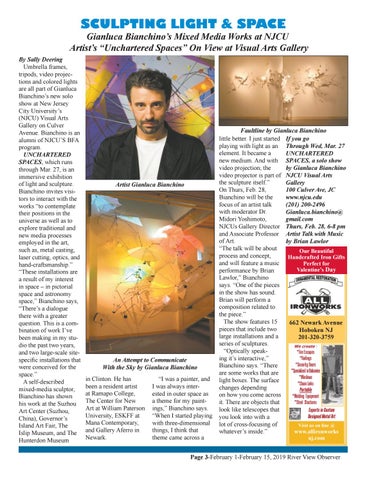 Gianluca Bianchino’s Mixed Media Works at NJCU Artist’s “Unchartered Spaces” On View at Visual Arts Gallery By Sally Deering Umbrella frames, tripods, video projections and colored lights are all part of Gianluca Bianchino’s new solo show at New Jersey City University’s (NJCU) Visual Arts Gallery on Culver Avenue. Bianchino is an alumni of NJCU’S BFA program. UNCHARTERED SPACES, which runs through Mar. 27, is an immersive exhibition of light and sculpture. Bianchino invites visitors to interact with the works “to contemplate their positions in the universe as well as to explore traditional and new media processes employed in the art, such as, metal casting, laser cutting, optics, and hand-craftsmanship.” “These installations are a result of my interest in space – in pictorial space and astronomy space,” Bianchino says, “There’s a dialogue there with a greater question. This is a combination of work I’ve been making in my studio the past two years, and two large-scale sitespeciﬁc installations that were conceived for the space.” A self-described mixed-media sculptor, Bianchino has shown his work at the Suzhou Art Center (Suzhou, China), Governor’s Island Art Fair, The Islip Museum, and The Hunterdon Museum

An Attempt to Communicate With the Sky by Gianluca Bianchino in Clinton. He has been a resident artist at Ramapo College, The Center for New Art at William Paterson University, ESKFF at Mana Contemporary, and Gallery Aferro in Newark.

“I was a painter, and I was always interested in outer space as a theme for my paintings,” Bianchino says. “When I started playing with three-dimensional things, I think that theme came across a

Faultline by Gianluca Bianchino little better. I just started If you go playing with light as an Through Wed, Mar. 27 element. It became a UNCHARTERED new medium. And with SPACES, a solo show video projection; the by Gianluca Bianchino video projector is part of NJCU Visual Arts the sculpture itself.” Gallery On Thurs, Feb. 28, 100 Culver Ave, JC Bianchino will be the www.njcu.edu focus of an artist talk (201) 200-2496 with moderator Dr. Gianluca.bianchino@ Midori Yoshimoto, gmail.com NJCUs Gallery Director Thurs, Feb. 28, 6-8 pm and Associate Professor Artist Talk with Music of Art. by Brian Lawlor “The talk will be about Our Beautiful process and concept, WE HAVE Handcrafted IronGifts MOVED TO and will feature a music Perfect for HOBOKEN Day Valentine’s performance by Brian Lawlor,” Bianchino says. “One of the pieces in the show has sound. Brian will perform a composition related to the piece.” 664 NewarkAvenue Ave, The show features 15 662 Newark Hoboken NJ pieces that include two Hoboken NJ large installations and a 201-320-3759 201-320-3759 series of sculptures. We create : “Optically speak*Fire Escapes *Railings ing it’s interactive,” *Security Doors Bianchino says. “There *Specialized in Balconies are some works that are *Windows light boxes. The surface *Chain Links changes depending Portable on how you come across *Welding Equipment *Steel Stuctures it. There are objects that look like telescopes that Experts in Custom Designed Metal Art you look into with a lot of cross-focusing of Visit us on line @ www.allironworks whatever’s inside.” nj.com 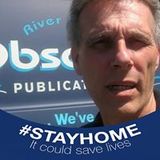