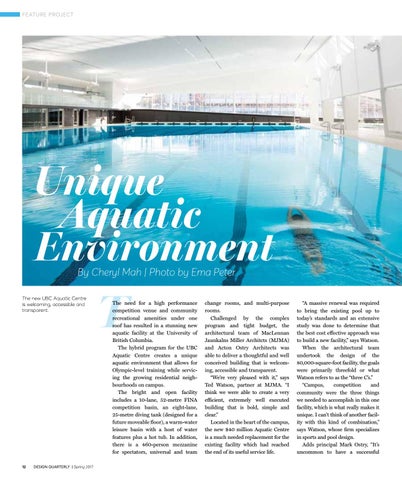 The new UBC Aquatic Centre is welcoming, accessible and transparent.

The need for a high performance competition venue and community recreational amenities under one roof has resulted in a stunning new aquatic facility at the University of British Columbia. The hybrid program for the UBC Aquatic Centre creates a unique aquatic environment that allows for Olympic-level training while servicing the growing residential neighbourhoods on campus. The bright and open facility includes a 10-lane, 52-metre FINA competition basin, an eight-lane, 25-metre diving tank (designed for a future moveable floor), a warm-water leisure basin with a host of water features plus a hot tub. In addition, there is a 460-person mezzanine for spectators, universal and team

change rooms, and multi-purpose rooms. Challenged by the complex program and tight budget, the architectural team of MacLennan Jaunkalns Miller Architcts (MJMA) and Acton Ostry Architects was able to deliver a thoughtful and well conceived building that is welcoming, accessible and transparent. “We’re very pleased with it,” says Ted Watson, partner at MJMA. “I think we were able to create a very efficient, extremely well executed building that is bold, simple and clear.” Located in the heart of the campus, the new $40 million Aquatic Centre is a much needed replacement for the existing facility which had reached the end of its useful service life.

“A massive renewal was required to bring the existing pool up to today’s standards and an extensive study was done to determine that the best cost effective approach was to build a new facility,” says Watson. When the architectural team undertook the design of the 80,000-square-foot facility, the goals were primarily threefold or what Watson refers to as the “three C’s.” “Campus, competition and community were the three things we needed to accomplish in this one facility, which is what really makes it unique. I can’t think of another facility with this kind of combination,” says Watson, whose firm specializes in sports and pool design. Adds principal Mark Ostry, “It’s uncommon to have a successful