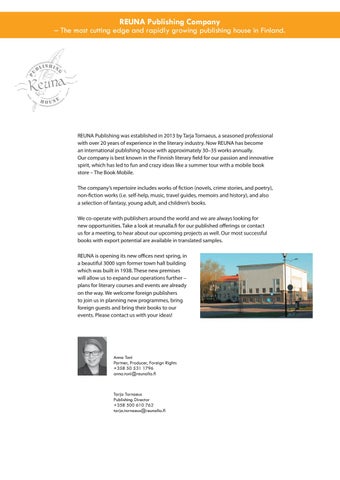 – The most cutting edge and rapidly growing publishing house in Finland.

REUNA Publishing was established in 2013 by Tarja Tornaeus, a seasoned professional with over 20 years of experience in the literary industry. Now REUNA has become an international publishing house with approximately 30–35 works annually. Our company is best known in the Finnish literary ﬁeld for our passion and innovative spirit, which has led to fun and crazy ideas like a summer tour with a mobile book store – The Book Mobile. The company’s repertoire includes works of ﬁction (novels, crime stories, and poetry), non-ﬁction works (i.e. self-help, music, travel guides, memoirs and history), and also a selection of fantasy, young adult, and children’s books. We co-operate with publishers around the world and we are always looking for new opportunities. Take a look at reunalla.ﬁ for our published oﬀerings or contact us for a meeting, to hear about our upcoming projects as well. Our most successful books with export potential are available in translated samples. REUNA is opening its new oﬃces next spring, in a beautiful 3000 sqm former town hall building which was built in 1938. These new premises will allow us to expand our operations further – plans for literary courses and events are already on the way. We welcome foreign publishers to join us in planning new programmes, bring foreign guests and bring their books to our events. Please contact us with your ideas!

When will the next meteor hit the Earth? There is a huge amount of asteroids in our solar system. The little rocks often pass our planet very close, and sometimes some of them hit us. What would happen if one of the big ones would collide with the Earth? It is such an intriguing question that it is often referenced in ﬁctional literature and movies as well. When the Sky Falls is a non-technical science book about collisions of heavenly bodies to Earth in the last 500 million years. It provides us with correct information about the threats and changing circumstances in the space around us. Eleven of 200 known craters created by meteors are in Finland, and the author has taken a closer look at them. He also takes us to the events of major collisions in Tunguska Russia in 1908 and Tjeljabinski in 2013. 156 pages. Available in Swedish.

The author Matts Andersén is a scientist with a lifelong career in educating the common people. He runs the visiting centre of Söderfjäden, a major crater in Western Finland. The author can easily adapt the contents of the book to diﬀerent countries.

For woodwork courses and tinkerers: How To Make Your Own Coﬃn Birth is something that people talk about. We wait it, plan it and celebrate it. Death, on the contrary, is something not to be mentioned too often. We do not wait it and hardly celebrate it. Since death is, after all, in front of everyone, we should familiarize ourselves with it. Even though we should not rush with death, we can adapt to the idea of it. A casket and a funeral urn are closely related to death. Everyone can choose one or another to her or his last resting place. Why not to construct a casket or an urn by oneself in order to have a satisfying and personal end result: for a gardener one with ﬂower decoration and for a sailor boat shaped one etc. This book (appr. 150 pages) oﬀers detailed instructions for various kind of caskets and funeral urns. Drawings of the book are clear and illustrative. The instructions are applicable to independent tinkering with light everyman’s tools, but the book introduces the possibilities that heavier electronic tools oﬀer as well. Construction of a casket or an urn suits well to the program of a woodwork club with diverse wood processing tools.

The retired woods and crafts teacher Osmo Perälä has written several text books for students. He has taught at several wood and metal courses.

Roots in two countries: Finland and Iran Do you know why they cut oﬀ the ﬂowers on an Iranian grave? How do you do bowling according to Islamic rules? How do you dance, walk a dog or date in a country where all of the above mentioned are forbidden? How do you build your identity when your parents are from two diﬀerent countries? The new non-ﬁction story Iran, My Grandmother’s Country, makes you wonder how it is like to cope with a split identity while tv keeps on showing horriﬁc scenes from your father’s land. This is a story of how it was like for Mina Iranta to travel to Iran and notice that nothing is like she had imagined. It’s a collection of stories from the lives of ordinary Iranian people. The look to this Middle Eastern country and its recent history reveals a more beautiful, fascinating and complex perspective forgotten in the news stories. The book can also act as a travel guide to a country that hasn’t been spoiled by tourism. 304 pages

Mina Iranta (born 1981) is from Helsinki, Finland. Her mother is a Finn and her father is from Iran. She has ﬁrst hand experience in combining two cultures as she works as a social worker in non-proﬁt organisations.

Pirjo Mellanen lives near the sea in the Southwest Finnish Archipelago where she writes novels and plays the accordion. Both have been her hobbies for years but after retiring, she started to concentrate primarily on writing. The love of writing prompted her to write her ﬁrst novel, Kohtalokas Albania (”Fateful Albania”) which was published in 2012. Since 2010 Pirjo and her husband have lived in sunny Albania several months of the year. However, they spend the summer months sailing in the Baltic Sea and the Finnish Archipelago which spurred her to write about her love of the sea and thus was born her next book Kohtalokas purjehdus (”Sailing with Fate”). In 2014 her fourth book was published; a crime novel titled: Hemskäriin, verkot on laskettava (”Going Home To Cast the Fishing Nets”).

Pirjo’s increased interest towards Albania was the catalyst for her third book: Matkustin Albaniaan (”My Travels in Albania”). The book is not a typical tourist guide but a glimpse into the modern Albania of today and how the country is changing both in its way of life and its people. The book contains photos, maps, a brief history, and also a glossary of the most commonly used Albanian terms. It is a must read for anyone wishing to visit this wonderful country and thoroughly enjoy their trip. Sample available in English.

Authors Petri Peltonen, Anna Toni, and Heikki Hyhkö share a combined enthusiasm for music; especially the thrill and enjoyment of music competitions. The trio met at The University of Helsinki, Finland, and began attending music trivia events held at local pubs. By 2014 they had begun to host their own music trivia game evenings. It became apparent that constantly and consistently, they were bombarded with music questions and therefore the trio developed an idea for a music trivia game book comprised by questions and answers.

Up To Eleven has 2000 questions and answers on pop and rock music from the 1950s all the way through to present. There are several categories of questions, for example; artists, genres, lyrics, and competitions. The answers to the questions, which include unexpected extra information, can be found on the back of the page which makes for an easy read. The authors are more than ﬂexible in accommodating some changes to the questions and answers in the book to reﬂect the target country and its music.

Katariina Hakaniemi (1968) was born in Finland but raised in Sweden until the age of 12. She attended The University of Helsinki, Finland where she earned her Master of Philosophy Degree with a concentration in Translation Studies. She has been a journalist for the past 20 years and in 2011 she was awarded Best Journalist of the Year from Finland’s eastern region. Hakaniemi has written numerous and varied works including articles on diﬀerent life situations and relationships; speciﬁcally those of couple’s.

I Do – 17 Stories of Life After Divorce was published in the Spring of 2015 and is a compilation of the divorce stories of 11 women and 6 men. Hakaniemi has succeeded in having people honestly discuss their divorce, their longing for love, and feelings of hurt. Some of the interviewees have been divorced only once while others twice; with some continuing to seek a new relationship while others preferring to remain single. Even though many of the stories are ﬁlled with pain and disappointment, a common belief in love still remains. The interviewees are primarily Finnish with one participant living in Turkey. Two Homes – 17 Life Stories of Children of Divorce will be released in the Spring of 2016 and views divorce from a completely diﬀerent angle. Hakaniemi interviews children as well as adult men and women and examines how divorce has aﬀected their lives. The touching stories convey how their parent’s divorce and the dissolution of the family, has aﬀected their own relationships throughout life. The books’ topics on relationships and love touch us all. The book is not only therapy but an inspirational and uplifting read. The book titled “I Do” has been adapted into a theatrical production titled “Life’s a Party” and the author continues to lecture on the topic at conventions and divorce support groups. Sample translation available in English

Puhtaat juuret (“Clean Roots: recipes and memories of the culinary culture in the Kymi region”) is a cook book, with over 100 stylish photographs. People of Kymi area in Finland dig up their food traditions and memories that have been alive through generations. For decades the deﬁning factor for Kymi cuisine is own production, food that has been grown in their own lands. The ﬁrst Emmental-cheese was produced in the area already in 1856. There is also one of the few bio wineries in Finland in the area. Also the Kymi river and the Finnish Gulf produce raw products and inspiration for some of the many recipes in the book. The book has been written by Hanna Maria Laakso, who has been boosting the image of Kymi area in other projects as well. In 2013 came out her documentary ﬁlm about the female artists in the area. Hanna Maria lives in Positano, Italy. The photographs are by Minna Metsärinne. She has had several exhibitions all over Finland. 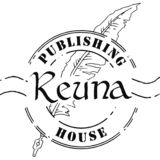