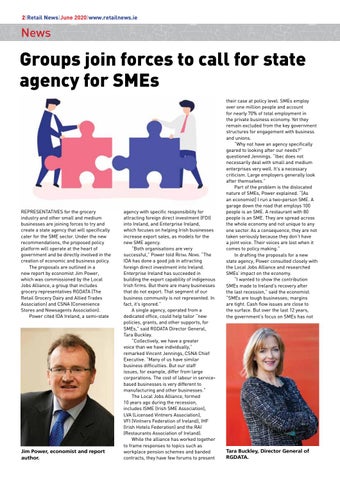 Groups join forces to call for state agency for SMEs

REPRESENTATIVES for the grocery industry and other small and medium businesses are joining forces to try and create a state agency that will specifically cater for the SME sector. Under the new recommendations, the proposed policy platform will operate at the heart of government and be directly involved in the creation of economic and business policy. The proposals are outlined in a new report by economist Jim Power, which was commissioned by the Local Jobs Alliance, a group that includes grocery representatives RGDATA (The Retail Grocery Dairy and Allied Trades Association) and CSNA (Convenience Stores and Newsagents Association). Power cited IDA Ireland, a semi-state

agency with specific responsibility for attracting foreign direct investment (FDI) into Ireland, and Enterprise Ireland, which focuses on helping Irish businesses increase export sales, as models for the new SME agency. “Both organisations are very successful,” Power told Retail News. “The IDA has done a good job in attracting foreign direct investment into Ireland. Enterprise Ireland has succeeded in building the export capability of indigenous Irish firms. But there are many businesses that do not export. That segment of our business community is not represented. In fact, it’s ignored.” A single agency, operated from a dedicated office, could help tailor “new policies, grants, and other supports, for SMEs,” said RGDATA Director General, Tara Buckley. “Collectively, we have a greater voice than we have individually,” remarked Vincent Jennings, CSNA Chief Executive. “Many of us have similar business difficulties. But our staff issues, for example, differ from large corporations. The cost of labour in servicebased businesses is very different to manufacturing and other businesses.” The Local Jobs Alliance, formed 10 years ago during the recession, includes ISME (Irish SME Association), LVA (Licensed Vintners Association), VFI (Vintners Federation of Ireland), IHF (Irish Hotels Federation) and the RAI (Restaurants Association of Ireland). While the alliance has worked together to frame responses to topics such as workplace pension schemes and banded contracts, they have few forums to present

their case at policy level. SMEs employ over one million people and account for nearly 70% of total employment in the private business economy. Yet they remain excluded from the key government structures for engagement with business and unions. “Why not have an agency specifically geared to looking after our needs?” questioned Jennings. “Ibec does not necessarily deal with small and medium enterprises very well. It’s a necessary criticism. Large employers generally look after themselves.” Part of the problem is the dislocated nature of SMEs, Power explained. “[As an economist] I run a two-person SME. A garage down the road that employs 100 people is an SME. A restaurant with 80 people is an SME. They are spread across the whole economy and not unique to any one sector. As a consequence, they are not taken seriously because they don’t have a joint voice. Their voices are lost when it comes to policy making.” In drafting the proposals for a new state agency, Power consulted closely with the Local Jobs Alliance and researched SMEs’ impact on the economy. “I wanted to show the contribution SMEs made to Ireland’s recovery after the last recession,” said the economist. “SMEs are tough businesses; margins are tight. Cash flow issues are close to the surface. But over the last 12 years, the government’s focus on SMEs has not