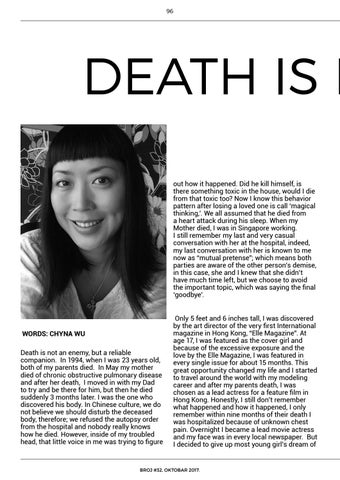 DEATH IS M out how it happened. Did he kill himself, is there something toxic in the house, would I die from that toxic too? Now I know this behavior pattern after losing a loved one is call ‘magical thinking,’. We all assumed that he died from a heart attack during his sleep. When my Mother died, I was in Singapore working. I still remember my last and very casual conversation with her at the hospital, indeed, my last conversation with her is known to me now as “mutual pretense”; which means both parties are aware of the other person’s demise, in this case, she and I knew that she didn’t have much time left, but we choose to avoid the important topic, which was saying the final ‘goodbye’.

WORDS: CHYNA WU Death is not an enemy, but a reliable companion. In 1994, when I was 23 years old, both of my parents died. In May my mother died of chronic obstructive pulmonary disease and after her death, I moved in with my Dad to try and be there for him, but then he died suddenly 3 months later. I was the one who discovered his body. In Chinese culture, we do not believe we should disturb the deceased body, therefore; we refused the autopsy order from the hospital and nobody really knows how he died. However, inside of my troubled head, that little voice in me was trying to figure

Only 5 feet and 6 inches tall, I was discovered by the art director of the very first International magazine in Hong Kong, “Elle Magazine”. At age 17, I was featured as the cover girl and because of the excessive exposure and the love by the Elle Magazine, I was featured in every single issue for about 15 months. This great opportunity changed my life and I started to travel around the world with my modeling career and after my parents death, I was chosen as a lead actress for a feature film in Hong Kong. Honestly, I still don’t remember what happened and how it happened, I only remember within nine months of their death I was hospitalized because of unknown chest pain. Overnight I became a lead movie actress and my face was in every local newspaper. But I decided to give up most young girl’s dream of 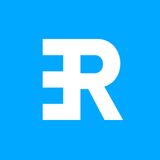