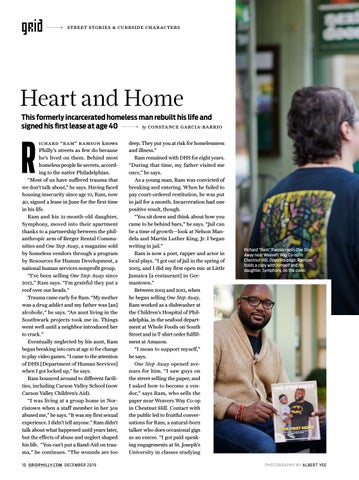 ichard “ ram ” ramson knows Philly’s streets as few do because he’s lived on them. Behind most homeless people lie secrets, according to the native Philadelphian. “Most of us have suffered trauma that we don’t talk about,” he says. Having faced housing insecurity since age 10, Ram, now 40, signed a lease in June for the first time in his life. Ram and his 21-month-old daughter, Symphony, moved into their apartment thanks to a partnership between the philanthropic arm of Berger Rental Communities and One Step Away, a magazine sold by homeless vendors through a program by Resources for Human Development, a national human services nonprofit group. “I’ve been selling One Step Away since 2012,” Ram says. “I’m grateful they put a roof over our heads.” Trauma came early for Ram. “My mother was a drug addict and my father was [an] alcoholic,” he says. “An aunt living in the Southwark projects took me in. Things went well until a neighbor introduced her to crack.” Eventually neglected by his aunt, Ram began breaking into cars at age 10 for change to play video games. “I came to the attention of DHS [Department of Human Services] when I got locked up,” he says. Ram bounced around to different facilities, including Carson Valley School (now Carson Valley Children’s Aid). “I was living at a group home in Norristown when a staff member in her 30s abused me,” he says. “It was my first sexual experience. I didn’t tell anyone.” Ram didn’t talk about what happened until years later, but the effects of abuse and neglect shaped his life. “You can’t put a Band-Aid on trauma,” he continues. “The wounds are too 10 GR ID P H IL LY.CO M DEC EM B E R 201 9

deep. They put you at risk for homelessness and illness.” Ram remained with DHS for eight years. “During that time, my father visited me once,” he says. As a young man, Ram was convicted of breaking and entering. When he failed to pay court-ordered restitution, he was put in jail for a month. Incarceration had one positive result, though. “You sit down and think about how you came to be behind bars,” he says. “Jail can be a time of growth—look at Nelson Mandela and Martin Luther King, Jr. I began writing in jail.” Ram is now a poet, rapper and actor in local plays. “I got out of jail in the spring of 2003, and I did my first open mic at Little Jamaica [a restaurant] in Germantown.” Between 2003 and 2012, when he began selling One Step Away, Ram worked as a dishwasher at the Children’s Hospital of Philadelphia, in the seafood department at Whole Foods on South Street and in T-shirt order fulfillment at Amazon. “I mean to support myself,” he says. One Step Away opened avenues for him. “I saw guys on the street selling the paper, and I asked how to become a vendor,” says Ram, who sells the paper near Weavers Way Co-op in Chestnut Hill. Contact with the public led to fruitful conversations for Ram, a natural-born talker who does occasional gigs as an emcee. “I got paid speaking engagements at St. Joseph’s University in classes studying

Richard “Ram” Ramson sells One Step Away near Weavers Way Co-op in Chestnut Hill. Opposite page: Ramson holds a copy with himself and his daughter, Symphony, on the cover.

You Can Do It! Remake your holiday with DIY gifts and classes • A homeless man's wisdom: "Be compassionate," p. 10 • The majestic hawks liv...

You Can Do It! Remake your holiday with DIY gifts and classes • A homeless man's wisdom: "Be compassionate," p. 10 • The majestic hawks liv...