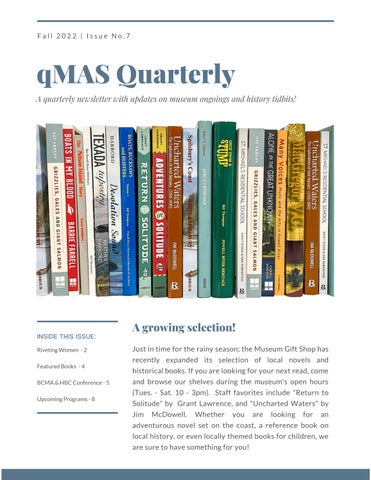 qMAS Quarterly A quarterly newsletter with updates on museum ongoings and history tidbits!

A growing selection! Just in time for the rainy season; the Museum Gift Shop has recently expanded its selection of local novels and historical books. If you are looking for your next read, come and browse our shelves during the museum&#39;s open hours (Tues. - Sat. 10 - 3pm). Staff favorites include &quot;Return to Solitude&quot; by Grant Lawrence, and &quot;Uncharted Waters&quot; by Jim McDowell. Whether you are looking for an adventurous novel set on the coast, a reference book on local history, or even locally themed books for children, we are sure to have something for you!

When the men went overseas during the Second World War, who was to keep the Powell River mill running? Well women of course! A group which started with just fifteen grew rapidly between 1942 and 1943, and soon, women were working in all areas of the mill. In fact, they were doing more than just making paper, they were building airplanes. In 1943, a subassembly plant for Boeing aircraft parts opened within the Powell River mill, and the majority of its employees were women. Not all women were given the opportunity to work in the mill or its temporary subassembly plant though; for many years, the Powell River Company&#39;s (PR Co.) hiring policies were exclusive of minority groups, including Indigenous people, ethnic minorities, and women. With the lack of male labour available due to the Second World War, the PR Co. opened up employment opportunities for white, able bodied women. In this photo (next page) is a group of young women sitting atop a PBY, the type of amphibious plane for which the PR Co. was contracted to assemble parts. On their faces are expressions of joy and excitement, and in this moment they are experiencing the

finished product of their work. Each of these women were employed by the PR Co., and although not all of them worked in the Boeing plant, it was their combined efforts in many departments which kept the mill running throughout the Second World War. No more than a year after this photo was taken, the war ended, Subassembly Plant #185 closed, and men returned to their jobs in the paper mill from overseas. This group of women who had clearly displayed their competence working in an industrial environment would now move aside, returning to the the role expected of them by society as caretakers and homemakers. ​ his is the life that most women returned to T when the end of the war came. In the early 1950s, only about a quarter of Canadian women were part of the workforce, a number which would grow in the decades to come. Now we have heard the story of the girls in the mill, the “Rosies of the North”, and the wartime effort, but the stories we do not so often hear are those of their accomplishments later in life. What did they go on to do? How this opportunity to work during the war shape their lives?

Sis Hayes Frances Lynette &quot;Sis&quot; Hayes nee Toll After spending so much time building airplanes, one of the women pictured in the photograph: Frances Lynette &quot;Sis&quot; Hayes, nee Toll, decided that she would learn to fly one herself. She took her first solo flight in 1946, and by 1949 she was the first woman to be a licensed pilot in Powell River. Over the next four years a group of aviation enthusiasts came together to form the Westview Flying Club, and in 1953 Sis was elected as the group’s first president. Living on the corner of Manson Avenue and Field Street allowed her spend time at the newly built airport which officially opened in 1952. Head over to our website to read the full stories of these incredible riveting women : www.powellrivermuseum.ca/riveting-women

Where does the term &quot;rivet&quot; come from? ​ ivets, used in the construction of R the Boeing aircraft during the Second World War, were used in the Powell River Mill when they assembled the aircraft parts for Boeing&#39;s PBY. qMAS 1995.89.3990

Available for purchase in the Museum Gift Shop!

St. Michael’s Residential School: Lament &amp; legacy by Nancy Dyson and Dan Rubenstein Learn from Nancy Dyson and Dan Rubenstein’s honest and eye opening experiences from their time as childcare workers in the 1970’s at the St. Michael’s Residential School in Alert Bay, B.C. Their stories continue to ensure that the injustices of residential schools are neither forgotten nor denied. Price: $21.95 Desolation Sound: A History by Heather Harbord Unique in its explorations, Harbord’s telling of Desolation Sounds&#39; history is one of the only reference books to the expansive coastal wilderness that lies just North of the qathet Region. Looking at both Indigenous and Settler history, Desolation Sound successfully fills a crucial hole in the history of the B.C coast. Price: $32.95

From November 1st to November 4th 2022, I attended the joint conference between the British Columbia Museum’s Association and Heritage BC, in Victoria. As an emerging museum professional, this was an exciting opportunity for me, as this was my first time attending an in-person conference!

objects should be handled by its community members to pass down its culture and history. Throughout the conference, I also took advantage of many networking opportunities including the opening reception at the Art Gallery of Greater Vancouver, networking events during lunch hours, and an evening social at Craigdarroch Castle. Moreover, during free time, I was able to visit both the Chinese Canadian Museum and the Royal BC Museum.

Over the course of four days, I attended various talks covering topics of reconciliation and reciprocity, accessibility, inclusivity, collaboration, digital programming, and principles of decent work places. Overall, a reocurring theme in the conference was the idea that museums have an opportunity One of my favorite talks of the conference was to re-invent themselves to better serve the “Nothing About Us Without Us” with the needs of our communities and be relevant to dynamic team from Saahlinda Naay (Saving the lives of people today. These are some of the Things House - Haida Gwaii Museum). In this new ideas I bring back with me to Powell River, talk, an indigenous-led team presented how ideas which will be shared with my colleagues they approach museum work: the idea that a to better our museum work and our collection is living and breathing and that environments for the benefit of the community.

Thank you to the Department of Canadian Heritage, the Canadian Museum Association and to the BC Museum&#39;s Association for their support, which enabled me to attend this year’s conference in Victoria.

Gladys Bloomfield was born in Portland, Oregon in 1919. Her family moved to Savary Island shortly after in 1920. There, Gladys first three years of schooling were done by correspondence courses. Because there was no school on the island, the family decided to move to Vancouver. Many years later, after retiring as a teacher, Gladys returned to Savary and spent much of her time there. She loved the island dearly, and partly wrote the book: &quot;Magnetic Isle, Gladys Bloomfield&#39;s Savary&quot;. She was unable to finish the book due to Alzheimer&#39;s disease. However, the book was finished and published by the Savary Island Heritage Society. Gladys says the book is &quot;for all those who find Savary irresistable. It is dedicated to those who have, through many years helped it make it so. May we be always mindful of our heritage and sincere and successful in our efforts to preserve our precious, natural, magnetic island.&quot;

Gift idea for the holidays: local historical photos! Looking for a unique gift? The qathet Museum &amp; Archives&#39; photograph collection offers high quality digital images of the region from the early 1900’s onwards that would make great additions to your home. Give us a topic, family name or decade and we will pick out some of the best images in our archives for you to print. The $20.00 digitization fee per image (for single use only) supports Museum operations and our ongoing efforts to digitize our collections. Just give us a shout!

Upcoming at qMAS See our Fall 2022 Program Guide for the full list of programs running from September to December 2022 To stay up to date, follow us @qathetMuseum on

For programs and activities to do from home visit: www.powellrivermuseum.ca /online-programs

A quarterly newsletter with updates on museum ongoings and history tidbits. In this issue you will find an article on Powell River's Riveting Women, featured books, and more! 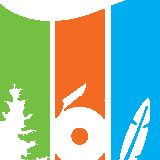 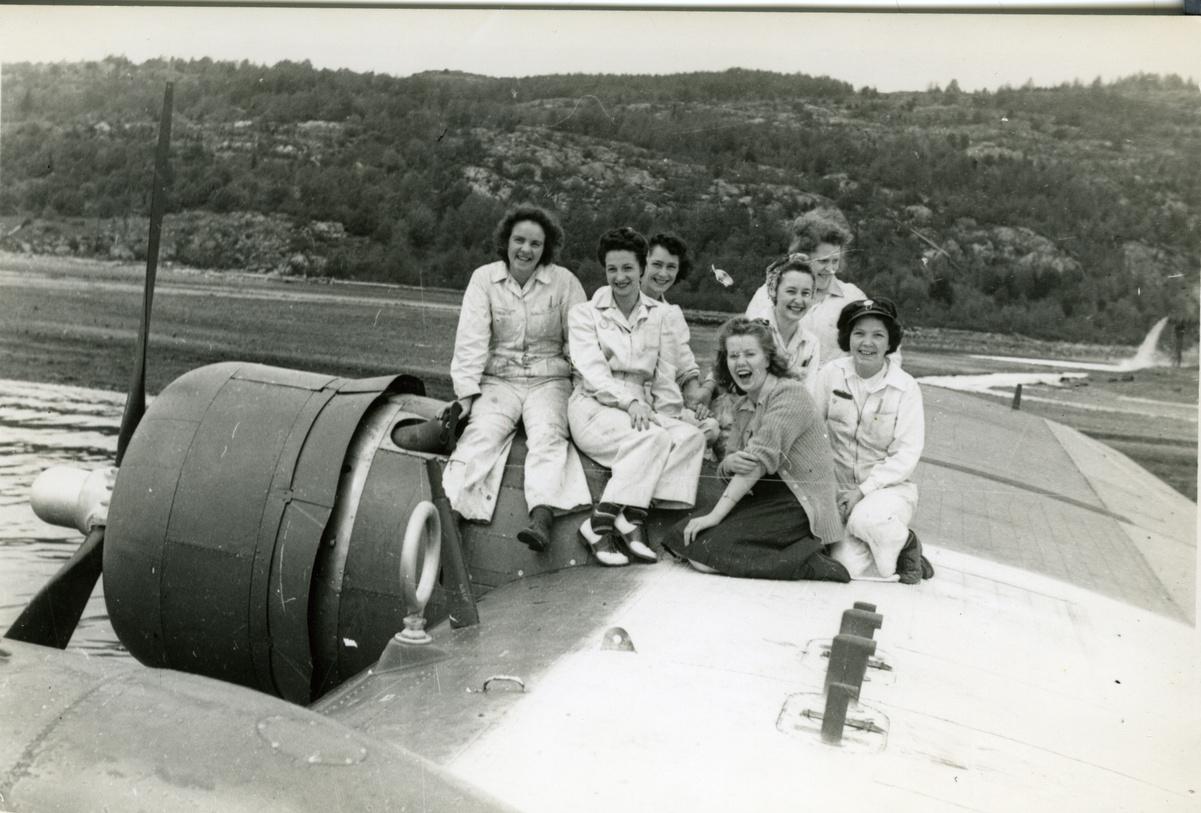 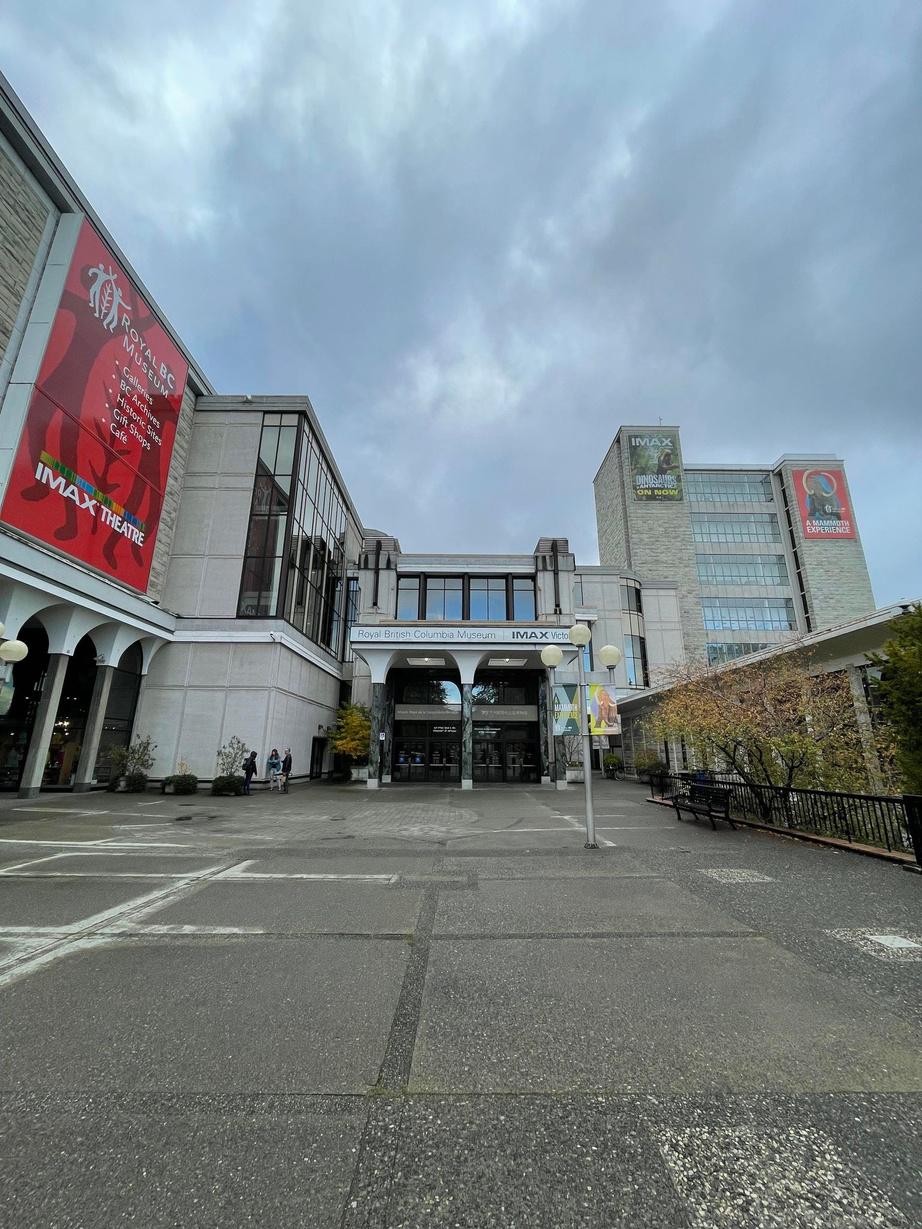