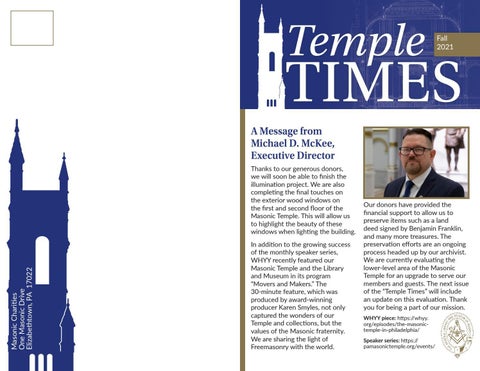 Thanks to our generous donors, we will soon be able to finish the illumination project. We are also completing the final touches on the exterior wood windows on the first and second floor of the Masonic Temple. This will allow us to highlight the beauty of these windows when lighting the building. In addition to the growing success of the monthly speaker series, WHYY recently featured our Masonic Temple and the Library and Museum in its program “Movers and Makers.” The 30-minute feature, which was produced by award-winning producer Karen Smyles, not only captured the wonders of our Temple and collections, but the values of the Masonic fraternity. We are sharing the light of Freemasonry with the world.

Our donors have provided the financial support to allow us to preserve items such as a land deed signed by Benjamin Franklin, and many more treasures. The preservation efforts are an ongoing process headed up by our archivist. We are currently evaluating the lower-level area of the Masonic Temple for an upgrade to serve our members and guests. The next issue of the “Temple Times” will include an update on this evaluation. Thank you for being a part of our mission. WHYY piece: https://whyy. org/episodes/the-masonictemple-in-philadelphia/ Speaker series: https:// pamasonictemple.org/events/

Prisoner-of-War Art, War of 1812 Over the past year, a quaint and unusual piece of Masonic embroidery has been put on display. The roughly apron-size cloth features a fairly comprehensive assortment of Masonic symbols clustered around an impressive All-Seeing Eye, surmounting an arch supported by the columns of King Solomon’s temple, Joachim and Boaz. A crowned figure is at the forefront of the scene. At the top, stitched black lettering spells out: “Harriet Jane Clark Made Prisoner of War With Her Husband Eleazear Clark Plymouth Feb. 3, 1813.” An arduous search for background information on this couple has so far, somewhat to our surprise, proved fruitless. Eleazear (Hebrew for “God helps”) was, in its more common form, Eleazar, a popular

18th century name. On a U.S. State Department list of sailors impressed (recruited by force) by the British from 1810, we found an Eleazear Clark of New Bedford, Massachusetts, but were unable to link him to our Eleazear, or to find him at all in the records of the New Bedford Maritime Museum. An 1813 report on impressment by the Massachusetts Legislature only produced a mention of a Clark but with no first name, hometown, or ship. Searching the British Archives’ collection of records for American war prisoners held at Plymouth was also fruitless. On a side note, we found out the U.S. Navy also impressed sailors, but not on the scale of the British. Apparently, serving on a warship was not viewed as a cushy career!

The Museum collection contains a rare officer’s jewel from a very exotic, somewhat obscure branch of the Masonic family: the Order of the Knights and Brethren of St. John the Evangelist from Asia in Europe (aka The Asiatic Brethren). The Brethren, depending on the source consulted, were either on the lunatic fringe of esoteric Freemasonry, or at the exciting core of 18th century alchemical practices. They blended moral teachings, in part Rosicrucian, with the quest to create gold and marvelous medicines. The leaders bore the title of The Worshipful Chiefs of the Seven Churches of Asia; their meetings were called Melchizedek Lodges, and the membership was

open to Jews, Persians, Turks and Armenians (hence the Asian in their name). The group was mostly active in Italy, Germany and Russia at the tail end of the 18th century. Intrigued by its card description as an extremely rare officer’s jewel — Grand Cross, Second Class — belonging to The Asiatic Brethren of China and dated 1774, we embarked on pre-display research. The first obstacle encountered was that we could find no such group. Further investigation revealed the artifact probably was an Asiatic Brethren jewel and indeed rare, but with no connection to China, unless it was manufactured there. Our suspicions were confirmed when we found a description of an Asiatic Brethren emblem quite similar to our jewel, i.e. a cross with four green stones and a lettered oval at the center. The artifact is bare of inscription, so there is no way to establish if it is indeed a Grand Cross, Second Class jewel.

Visit MasonicCharitiesLegacy.org for further information on how you can include the Masonic Charities in your estate plan. Or, call us for our Estate Planning Guide, QCD Kit or Income for Life Guide. Thank you for supporting the Masonic Charities. To learn more about opportunities to support the Masonic Library and Museum of Pennsylvania, call 1-800-599-6454 or email giving@pamasonictemple.org. 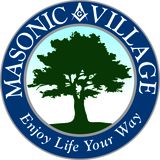