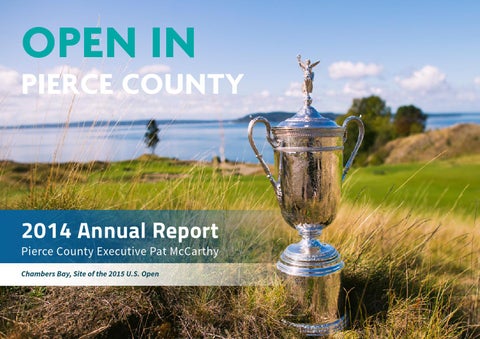 OPEN IN PIERCE COUNTY 2014 Annual Report As we prepare this report, Pierce County is working with the United States Golf Association on the final stages of preparations for the 2015 U.S. Open at Chambers Bay. The amount of attention that our beautiful part of the Pacific Northwest will get - is already getting! - is off the charts. More than 100 million people around the world will see our regionâ&amp;#x20AC;&amp;#x2122;s natural beauty - from the shores of Puget Sound to the snowcapped peak of Mount Rainier. Itâ&amp;#x20AC;&amp;#x2122;s an amazing opportunity to showcase what makes our home special, and we will be ready. County-City Building

Golf’s national championship is famous for being “open” to all. In this report, we celebrate other ways Pierce County is open. We took big steps last year to support our agriculture, aerospace and manufacturing sectors -- thus showing we are open for business. We also opened a Sheriff’s Department precinct serving the mid-county area that has

sought a more visible police presence for decades. We continue to invest in our infrastructure – roads, sewers, criminal justice systems, building permits, etc. – opening the possibilities of continuing to make Pierce County a wonderful place to live, work and play. The 3,000 employees of Pierce County government are

dedicated to providing efficient and effective public services. This is our home, and we will do all that we can to protect and enhance it - and proudly show it off to the world.

U.S. OPEN I serve as chair of Pierce County’s U.S. Open Operating Committee and oversee the county’s partnerships with the USGA on such logistics as traffic, parking, security, and more. I am committed to a safe, fun and successful championship that will test the world’s best golfers and boost local tourism for years to come. Throughout 2014, we sought ways to share the exciting 115year history of the U.S. Open as well as the story of how Pierce

County transformed an empty gravel mine into a world-class golf course and park. We made dozens of presentations to civic groups throughout the region. And capitalized on the opportunity to create a 3,000-square foot U.S. Open exhibit at the Washington State Fair in Puyallup. Tens of thousands of people stopped by and learned more about our national championship and Chambers Bay.

Stay Connected Keep up with the latest information about the championship at www. ChambersBayGolf.com and www.USOpen.com.

Touring the Mountain Lodge Farm which produces varieties of goat milk and cheeses.

ECONOMIC GROWTH Award-winning Agriculture Program I toured farms throughout the county to find out more about barriers to success for the local agriculture industry. That research led to my Agriculture Program, which created a multi-disciplinary, multiagency approach to assisting local farmers. This work was ongoing throughout the year but much of it was highlighted during the countyâ&amp;#x20AC;&amp;#x2122;s first Farm Forum, which brought more than 100 agriculture industry representatives together to share ideas. Of our many successes in 2014, one of my personal favorites was the countyâ&amp;#x20AC;&amp;#x2122;s development of the Puget Sound Fresh

mobile app for Apple and Android devices. Interns in our Information Technology Department built an app that connects consumers with farms and farmers markets throughout Western Washington.

The Agriculture Program was honored by regional peers when it received a VISION 2040 award from the Puget Sound Regional Council.

Room to grow in aerospace

The aerospace industry has been a key component of the local economy for decades. Here are some of my achievements in that sector in 2014: •

I hosted my third Aerospace Summit to keep industry representatives focused on ensuring that Pierce County builds on its role in the global aerospace supply chain. I supported the state’s plan that persuaded Boeing to build the 777X in Washington state, which will keep

Boeing’s Frederickson plant and local suppliers busy for many years. •

I met with the Japanese leaders of Toray Composites, and later I granted “Executive Priority Permitting” status to Toray for an expansion of its Frederickson plant that will create many family-wage jobs.

PUBLIC SAFETY Under my direction, the county and its partners executed several strategies that make everyone safer.

Sheriff’s Precinct: My office led the way in identifying a site and funding to open a Sheriff’s Department precinct in the Parkland/ Spanaway area. This will reduce response times and provide a more visible law enforcement presence for a community that has been seeking this for many years.

South Sound 911: My vision of improving public safety by creating a state-of-the-art communications system for first responders is becoming a reality. Pierce County Sheriff’s deputies and other local police agencies shifted to a new radio network that would not have been possible without my initiative to create South Sound 911, the voterapproved agency that helped pay for it. South Sound 911 also delivered more than 3,700 radios to first responders in 30 agencies. As a result, more first responders can quickly and clearly communicate with each other across the region.

Closing in on Crime: A look at the data Statistics from the Sheriff’s Department show that crime is down in many categories, including fewer service calls per officer, fewer crime cases per officer, and a major drop in crimes per thousand residents. Visit www.piercecounty crimedata.org to see data from your neighborhood.

TRANSPARENCY Efficient and effective government Our commitment to fiscal sustainability and better customer service is embodied in my proposal to consolidate eight commercial office leases into one new building that provides onestop shopping for customers and improves internal efficiencies. We spent 2014 working with the design team from Wright Runstad and partners to develop a proposal for the County Council’s consideration in early 2015. We are implementing a new system of performance management called the “County Balanced Scorecard.” This system ensures that measurable and meaningful performance goals

and strategies cascade through the departments so that we are all pulling in the same direction. I am committed to helping the Sheriff fully implement the recommendations of the independent performance audit on County Jail operations. Funding for other county programs is threatened if we don’t get the jail on fiscally sound footing.

Here is a look at the total 2015 county budget, which includes all federal and state grants, utility revenues, etc: Total County Budget 2015

Approximately 80 percent of the $282 million General Fund is dedicated to public safety programs. Here is a breakdown of where that money goes: Public safety/judicial Sheriff

The General Fund gets most of its funding from property and sales taxes. But Pierce County only receives a portion of each. Property Tax: Using the 2013 average value of $193,308 for the Puyallup School District as an example, that calculates an average 2013 property tax of $2,825 for that area. Here is where those tax dollars went:

Regional leadership I lead or serve on the boards of regional organizations that have an effect on our daily lives. Here&#39;s a quick look at some of those activities:

As president, I aggressively lobbied the Legislature to pass a statewide transportation package that includes funding for the Highway 167/509 Puget Sound Gateway project to improve the movement of freight through our ports, among other things. The Legislature has been paralyzed on this issue, but we will keep fighting for this important investment in our local economy.

Alliance for a Healthy South Sound: As chair, I worked to develop

a new model of funding with the state to ensure that clean water strategies are equitable.

Pierce Transit board: I supported

innovations in transit services, such as the Gig Harbor trolley.

Sound Transit board: I worked on parking relief at the Puyallup and Sumner stations and on plans for extending the popular Tacoma Link light-rail system.

As one of the architects of this program, I was pleased to see the first projects begin at the Calistoga levee and the wall at the Tacoma sewage treatment plant.