Made in Pierce County - 2013 Annual Report 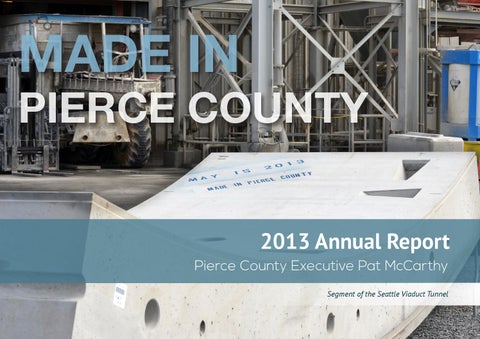 I am pleased to report that we made significant progress in 2013 to attract family-wage jobs, improve public safety and enhance the livability of our communities.

I know we are doing those things well because of the success we&#39;ve had recruiting quality employers to the area in the past year.

We are blessed with a diverse economy and amenities that make Pierce County an incredible place to work, play, and raise a family. Those amenities include excellent schools, health care, arts and entertainment, and more.

The 3,000 employees of Pierce County government are dedicated to providing efficient and effective public services. Thank you for the opportunity to serve as County Executive.

Regional Leadership to Improve our Communities As County Executive, I hold leadership positions with a variety of organizations that have a positive impact here.

Here are some highlights: Highway 167 Coalition I continue to advocate for a statewide transportation package that includes completing Highway 167 from Puyallup to the Port of Tacoma. Once completed, this project will create tens of thousands of jobs.

South Sound 911 I serve as chair of the Policy Board, which is building a seamless emergency communications network. In 2013, we began delivering new radios to first responders that will improve safety for us all.

Pierce County Regional Council As a board member, I support funding for local road projects and congestion relief along the Joint Base Lewis-McChord corridor.

WorkForce Central As a board member, I was proud to participate in a big job fair for military veterans.

Sound Transit In 2013 I was chair of the board, which studied alternatives for expanding the highly successful Tacoma Link.

Pierce Transit As a board member, I am happy to report we stabilized the agency budget and even rolled out some innovative services, such as the successful Gig Harbor Trolley.

Building a Stronger Economy Aerospace: I am working with state and regional partners to expand our Boeing business, including the network of about 80 suppliers. I attended the Paris Air Show with the Governor&#39;s delegation and generated 3 leads from meetings with several dozen companies. Our 2nd annual Pierce County Aerospace Summit provided valuable information to local industry representatives about workforce training and emerging technologies like 3-D printing.

The vertical fin of the 787 is manufactured at Boeingâ&amp;#x20AC;&amp;#x2122;s Frederickson Plant

Manufacturing growth: The Frederickson industrial area is adding jobs. My day trip to California helped recruit Niagara Bottling’s first plant in the Pacific Northwest. Niagara planned to hire its workforce in the first quarter of 2014. The consortium known as EnCon began building the Seattle tunnel liner at an expanded concrete plant in 2013. And Carlisle Construction hired 135 after building a 400,000 square-foot manufacturing facility, with plans to hire more in the future.

Agriculture: Pierce County’s first Farm Forum - planned for February 2014 - will connect farmers with experts who can help them expand into new markets. Other Gains: Amazon’s new facility in DuPont and State Farm’s expansion into Tacoma are great signs of a growing economy in Pierce County.

Chambers Bay: In 2013, the United States Golf Association began selling corporate hospitality packages to local and national businesses that want a unique spectator experience at the 2015 U.S. Open. The USGA will recruit 4,500+ volunteers in 2014.

The national spotlight has led to an outstanding year at the golf course, which reported higherthan-expected revenues from golf, merchandise and restaurant operations.

Enhancing our quality of life

Enhancing Our Quality of Life Mental health: We worked with the state to reduce its backlog of jail inmates waiting for mental competency evaluations. Preliminary data show it’s working. Sheriff’s precinct: Residents in the Spanaway/Parkland area have waited years for a more visible police presence. I am excited about opening the precinct in 2014. Flood control: In 2013, we completed important levee repairs along the Puyallup River. And we assisted the Flood Control Zone District in selecting two important flood control projects for construction: Orting’s Calistoga Levee and Tacoma’s Treatment Plant Flood Wall. Foothills Trail: Pierce County closed on the purchase of the most significant piece of commercial property needed to complete the Foothills Trail segment from Puyallup to Buckley. Now we are seeking grant funds for the trail construction.

Protecting Puget Sound: Thanks to funding from the Legislature, the county removed 200 derelict creosote pilings from the shoreline near Chambers Bay. We are planning to remove the rest in 2014.

Responsible Management of our Resources Administration building: We are working on a plan to improve service delivery and save money by moving operations from eight leased buildings into one building we would lease-toown from a nonprofit corporation. I anticipate bringing the County Council a design and proposed lease in fall 2014. Transparency: We won a â&amp;#x20AC;&amp;#x153;Key Awardâ&amp;#x20AC;? from the Washington Coalition for Open Government for our new web page that provides easier access to commonly requested public documents. Best Permitting Agency Thanks to a streamlined process, our planning department processed 25% more permits while reducing customer wait times from an average of 40 minutes down to 20 minutes.

Here is a look at the total 2014 county budget, which includes all federal and state grants, utility revenues, etc: Total County Budget 2014

Approximately 80 percent of the $271 million General Fund is dedicated to public safety programs.

The General Fund gets most of its funding from property and sales taxes. But Pierce County only receives a portion of each. Property Tax: Using the 2012 average value of $190,355 for the Puyallup School District as an example, that calculates an average 2012 property tax of $2,841 for that area.

Here is where those tax dollars went: State

PIERCE COUNTY Rows of squash at a local farm.

Made in Pierce County - 2013 Annual Report