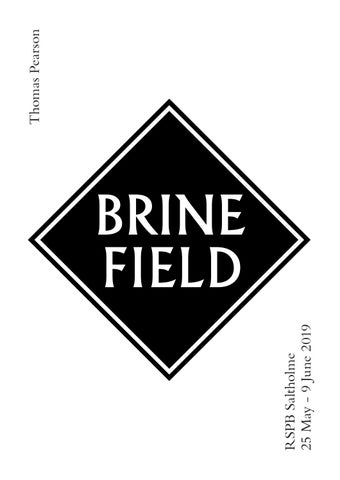 Salt production was recorded around Saltholme as early as 1296. Early processes involved diverting sea water into trenches and evaporating it to obtain crystallised salt. In 1874 the Bell Brothers found deposits of geological salt deep beneath their iron works at Port Clarence. By the late 1880s a number of companies had set up derricks on Saltholme marsh, applying techniques developed in America for oil drilling to extract the salt in the form of liquid brine. The brine was piped to large â&amp;#x20AC;&amp;#x2DC;panhousesâ&amp;#x20AC;&amp;#x2122; nearby to be boiled off.

Saltwestern Frontiersmen, these derricks, standing off and eyeing us; rough as tapered ranchers but “handsome is as handsome does”. In each an engine clunks, a great nodding beam booms like a bittern. Water, driven down, backs up brackish, thick with salt, and a cavern slowly grows below. A strange, inverse balloon, hollowed by solution. It’s dark in the cave but if you squeeze beneath the cowboy’s frame and down his tether-line, three hundred metres deep, and hold your breath and shine a light the walls would sparkle whiter than whiter than white.

Tonight the terns arrive The terns are tearing patterns: pennants in the evening’s witchy tissue.

One of the f lock is the jali, the minstrel, who for the past five thousand miles has swept them all along with tales of old migrations. In the jali’s songs the Milky Way depicts extravagant sardine shoals by the Gambia, jet-spray off Dakar, turbulence at Kent. The constellations are legend-birds of magic and authority: terns outwitting falcons, tern-turns, tern-trickery. Two friends, Mulloy and Maloney, out late at the Bendy, hear the birds f lap home: kee-ar, kirree, kirree. Mulloy’s mam calls him in, her Ulster voice a-f lutter, and the keep-kree f locking whoosh, occultish to the boys, clears the Tees.

– Industry brought immigrants to new settlements on the north bank of the Tees. The hamlet of Haverton Hill was enlarged to house saltworkers, many from Cheshire. Port Clarence was originally home to north-easterners working coal staithes on the river but soon became a predominantly Irish community.

Haverton Up to my knees in thistles and out of my depth in memory. Now, Haverton, history greets me five ways: I’m panning, several hundred years ago, popping sea-coal in the fire: white sludge and coast-cloud bloom in billows. I’m lying on my back. Oystercatchers overhead, buoyed on bells, bank beautiful – as the Clarence line to Samphire Batts banks beautiful. I’m at the salt works, all of them at once, and boiling: brine-brow, brick-f lesh, roasted, greater upper-body strength than ever. I’m roaring from the Top House, grip reverberating from the tools, the sheer ship, hoping Hope Street still runs straight. I’m watching a Synthetic mist roll in through an empty door, blistering the paintwork: some season, that. Some seasoning.

– The iron and salt works were soon joined by other manufacturing plants. Furness opened a shipyard in 1917. From 1920 Brunner Mond ran a factory producing synthetic ammonia for explosives and fertiliser; this was incorporated into Imperial Chemical Industries (ICI) when Brunner Mond merged with three other companies in 1926. ICI expanded massively over the following decades, bringing prosperity and thousands of jobs to the area. Pollution eventually overwhelmed Haverton Hill and the village was demolished in the 1960s.

Elevation of drilling derrick used throughout the Saltholme site by various salt companies, as described in the Proceedings of the Institution of Mechanical Engineers, 1893.

War energy Before birds were birds the tropical sun beat down here, close to the equator, its rays crystallising the lapping edge of a giant lake. Dunes of white. The stem of life was split four ways: the splinters became fur, shell, scales, hollow heads, and pound-for-pound the tiny finch now holds the hardest bite. Did a ceremony mark the driving of the single first rivet in the Furness shipyard? With swiftness, yes. The rivet sings, the hull vibrates like a drumskin: war war war In the mouth of a bird, still reptile, the final tusk makes way for sift-not-chew, smash-not-tear. The earth hums with warmth from the sun and pipes and wires hot to touch, feverish, are taut and full to split with energy.

– The salt deposits below Saltholme were formed 270 million years ago around a huge desert basin called the Zechstein Sea. S.S.‘War Energy’ was the first ship launched from Haverton. Construction began in 1918 when new ships were urgently needed for the Great War.

Coronation You offered us a dream: follies in a landscape taking turns to catch the eye and vanish in rotation. There is a lake to ref lect in, a marsh with gilded banks and bands of gentle waders: jacksnipe, whimbrel. The territory is marked by makersâ&amp;#x20AC;&amp;#x2122; hands: rills are trenches; hills are silt-and-cinder salterns; fences, footings, taps in the reed pools all signs of old production â&amp;#x20AC;&amp;#x201C; of channelling, of concentrate, of tawny work, hale wit; the clatter of a heavy tambourine ringing through the centuries. Around you is a huge crown, a wet crown, its prongs and sharp vessels digging down as hard as pointing up.

â&amp;#x20AC;&amp;#x201C; The buildings visible from here include several working remnants of the former ICI works in Billingham. To the north-east are structures associated with the processing and storage of petrochemicals at Seal Sands.

Beauty department Powder clouds and pouting in the beauty department. They’re selling preen oil now, extracted from a tiny gland in the water-rail’s tail. The oil was found to trigger human lust with its subtle scent and structural effects and as you can imagine, it’s f lying off the shelves. When it’s gone it’s gone. One dab, they say, will open root systems of passion in your f lesh, supporting onion-sprouts of longing on your neck, marrows of affection in your eye-bags. Oh the oil has great potential for fertility, then – much like the guano found on rocks in the Atlantic and shifted to the fallow fields of England in the 1850s when farmers, gardeners and orchardmen formed a chorus praising precious excrement and a horde of sunburnt sailors fighting fist and pick for a patch of stinking island scraped a house’s height off Ichaboe in two exhausting years. – The Bell Brothers’ iron works at Port Clarence were built close to a peninsula called Ichaboe, now vanished, named after the seabird island off present-day Namibia.

Boots I’m wearing two odd boots from my grandad’s childhood. One is a welly, nearly lost in a bog by Billy Blackburn’s house. One is a workboot, sodium on the sole. I should explain: Billy Blackburn’s father worked the brine fields and piped the brine to Billingham, where it was split, where grandad’s father worked with men in moleskin suits and masks, aprons, gloves and goggles, moulding sodium to ingots and cyanide to eggs. The bog was black and horrible, the sole would fizz in puddles: between the two a giant step from boy to man, marsh to metal. In these boots I’ll march along the river’s ragged edge, one foot tarred with chemicals, the other lit like a white-hot will-o’-wisp. My steel pipe shins, thinning now, will superheat but oh but hold me steady!

– My great-grandfather Thomas Pearson began his working life at the Dean &amp; Chapter colliery in Ferryhill, County Durham, and ended it as a foreman for ICI at Cassel Works in Billingham. His son Thomas, my grandfather, spent his whole career with ICI.

Brine Field is a site-specific installation embedded in the industrial landscape of RSPB Saltholme. Poems and sculptural monuments respond to the history of a remarkable environment, now a haven for birds, shaped by salt, iron, ships and chemicals. Twelve white obelisks are distributed across the reserve. The poems in this booklet are intended to be read near them, as indicated on the map on the centre pages. Thomas Pearson grew up in Billingham and is now based in York. His work concerns history, buildings and places. 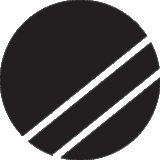 Penned in the Margins