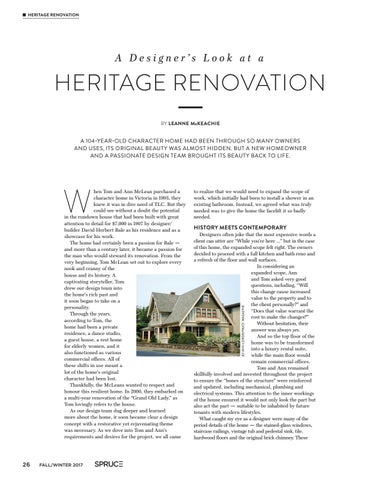 A 104-YEAR-OLD CHARACTER HOME HAD BEEN THROUGH SO MANY OWNERS AND USES, ITS ORIGINAL BEAUTY WAS ALMOST HIDDEN. BUT A NEW HOMEOWNER AND A PASSIONATE DESIGN TEAM BROUGHT ITS BEAUTY BACK TO LIFE.

to realize that we would need to expand the scope of work, which initially had been to install a shower in an existing bathroom. Instead, we agreed what was truly needed was to give the home the facelift it so badly needed.

HISTORY MEETS CONTEMPORARY Designers often joke that the most expensive words a client can utter are “While you’re here …” but in the case of this home, the expanded scope felt right. The owners decided to proceed with a full kitchen and bath reno and a refresh of the floor and wall surfaces. In considering an expanded scope, Ann and Tom asked very good questions, including, “Will this change cause increased value to the property and to the client personally?” and “Does that value warrant the cost to make the changes?” Without hesitation, their answer was always yes. And so the top floor of the home was to be transformed into a luxury rental suite, while the main floor would remain commercial offices. Tom and Ann remained skillfully involved and invested throughout the project to ensure the “bones of the structure” were reinforced and updated, including mechanical, plumbing and electrical systems. This attention to the inner workings of the house ensured it would not only look the part but also act the part — suitable to be inhabited by future tenants with modern lifestyles. What caught my eye as a designer were many of the period details of the home — the stained-glass windows, staircase railings, vintage tub and pedestal sink, tile, hardwood floors and the original brick chimney. These JO-ANN LORO/SPRUCE MAGAZINE

hen Tom and Ann McLean purchased a character home in Victoria in 1993, they knew it was in dire need of TLC. But they could see without a doubt the potential in the rundown house that had been built with great attention to detail for $7,000 in 1907 by designer/ builder David Herbert Bale as his residence and as a showcase for his work. The home had certainly been a passion for Bale — and more than a century later, it became a passion for the man who would steward its renovation. From the very beginning, Tom McLean set out to explore every nook and cranny of the house and its history. A captivating storyteller, Tom drew our design team into the home’s rich past and it soon began to take on a personality. Through the years, according to Tom, the home had been a private residence, a dance studio, a guest house, a rest home for elderly women, and it also functioned as various commercial offices. All of these shifts in use meant a lot of the home’s original character had been lost. Thankfully, the McLeans wanted to respect and honour this resilient home. In 2000, they embarked on a multi-year renovation of the “Grand Old Lady,” as Tom lovingly refers to the house. As our design team dug deeper and learned more about the home, it soon became clear a design concept with a restorative yet rejuvenating theme was necessary. As we dove into Tom and Ann’s requirements and desires for the project, we all came

SPRUCE features content-rich articles and high quality photography to showcase the most interesting and innovative homes on Vancouver Island...

SPRUCE features content-rich articles and high quality photography to showcase the most interesting and innovative homes on Vancouver Island...