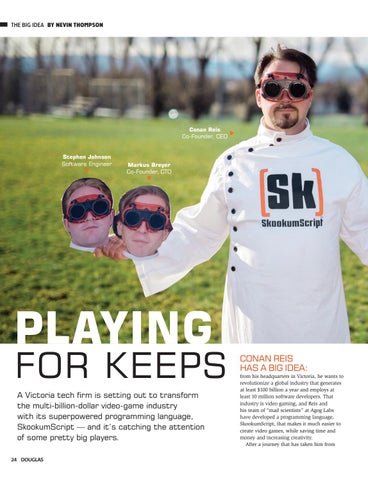 the big idea BY Nevin Thompson

for Keeps A Victoria tech firm is setting out to transform the multi-billion-dollar video-game industry with its superpowered programming language, SkookumScript — and it’s catching the attention of some pretty big players.

Conan Reis has a big idea: from his headquarters in Victoria, he wants to revolutionize a global industry that generates at least $100 billion a year and employs at least 10 million software developers. That industry is video gaming, and Reis and his team of “mad scientists” at Agog Labs have developed a programming language, SkookumScript, that makes it much easier to create video games, while saving time and money and increasing creativity. After a journey that has taken him from