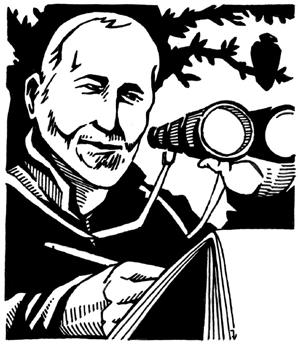 Here in beautiful Brown County, we are blessed not only with the majestic procession of seasons—each glorious in its own aspect—but also certain micro-seasons within the grand pattern.

Weather seems to be scrambled up like a walking taco these days, but when I was a kid, there were two very specific cold snaps in the spring and early summer.

The first, arriving in late April or early May, was called “Dogwood Winter,” and somehow figured in to help the dogwood trees bloom at the right time. Dad would pull up his coat collar and say, “Dogwood Winter.”

Then, early in May, when things were really starting to warm up, there would be another short cold snap Dad called “Blackberry Winter” which also, theoretically, had something to do with helping the blackberries multiply.

After they cut down a massive amount of Brown County trees in the early settler days, bushes and shrubberies of every kind took over the landscape. Some were not at all helpful, but others, like huge thickets of blackberry vines, had their uses.

There would come a time, “long about knee deep in June” as James Whitcomb Riley said, when we would rise early, dress carefully, and go blackberrying.

It was important to cover as much bare skin as possible, because the overburdened blackberry vines were also loaded with briars—big, sharp stickers that would gouge you and draw blood if you weren’t careful.

This usually meant wearing long sleeved flannel shirts and bib overalls—even though temperatures would climb swiftly as the morning wore on. Mom would put rubber bands around the pant legs and cuffs to keep the insect hordes from getting in there and devouring us alive.

Chiggers belong to the same class of insects as scorpions and ticks. They cause most of the itchy, summertime bites that occur after walking outdoors through grassy or brushy areas. They grab onto shoes or clothing and typically explore a host for several hours before choosing a place to feed. Bites are most common at sites around sock lines on the ankles, around the waist, and near the groin. Bites also may occur in other areas, including behind the knee, and under the armpit.

When I was a small boy, I seemed to be the ideal host for armies of these annoying pests. They found me perfectly delectable. After these blackberrying outings I would be covered in every private area by tons of bites.

Between the bees, the mosquitoes, the ticks, and the rest, I was pretty much an insect banquet for most of the summer. We were children of nature. The woods were our wonderland and constant companion.

After bath time, Dad would dab calamine lotion on all the little itchy red spots and he would recite a little poem:

Not far from our house on Hornettown Road was a huge overgrown brushy brake, at the edge of the woods, by a field. It was full of blackberry briars, huge canes of luscious, plump fruit defended only by the sharp prehistoric claws of the blackberry briars.

With the patience of age, adults usually did pretty well at getting the fruit without getting hurt. But greedy, overeager boys often paid in blood for the luscious prize.

We collected the berries in big two-and-a-half gallon galvanized pails. Between my parents and brothers and I, we picked a lot of berries. Of course, we boys were probably eating as many as we were putting in the pail. That was our rule.

Standing in the blackberry thicket as a summer morning quickly warmed to summer day, we encountered a seemingly inexhaustible supply of big, fat, ripe blackberries—buckets and buckets of them— free for the taking.

The tangible reward for the adversities of wild berry gathering was considerable: Mom’s blackberry cobbler.

I guess most people think their mother was the best cook ever, but I have to tell you, my mother was a real wonder in the kitchen.

A few years back on the family thread, someone posted a query, “How did grandma make her cobbler?” This seemingly simple question exploded into a long, involved debate with many theories, including internet searches on just what exactly constitutes a cobbler.

Nobody could ever exactly duplicate that fabulous blackberry cobbler, not even me, the greatest known expert on Mom’s cooking. Unlike her peach cobbler, it had layers of strips of pastry within the cobbler. She would dish it hot into a bowl and dribble just a bit of milk over the top.

And so, the blackberry cobbler remains, hanging in our memories; the perfect product of an earthy encounter with nature.