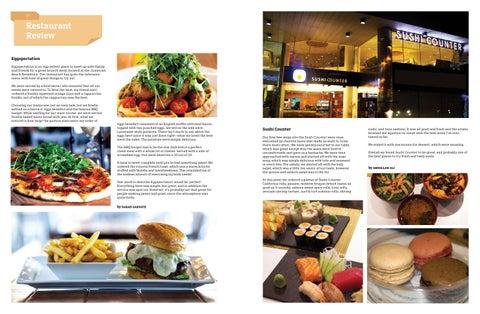 Restaurant Review Eggspectation Eggspectation is an egg-cellent place to meet up with family and friends for a great brunch meal, located at the Jumeirah Beach Residence. The restaurant has quite the extensive menu with tons of great things to try out. We were served by a kind server who ensured that all our needs were catered to. To beat the heat, my friend and I ordered a freshly squeezed orange juice and a cappuccino freddo, out of which the cappuccino was the best. Choosing our mains was not an easy task, but we finally settled on a bacon n’ eggs benedict and the famous BBQ burger. While waiting for our main course, we were served freshly baked warm bread with jam. At first, what we noticed is how large the portion sizes were; my order of

eggs benedict consisted of an English muffin with beef bacon, topped with two poached eggs. Served on the side were Lyonnaise-style potatoes. There isn’t much to say about the eggs here since it was just done right—what we loved the best were the sides. The potatoes were simply delicious. The BBQ burger had to be the star dish and is a perfect cheat meal with a whole lot of cheese. Served with a side of scrambled egg, this meal deserves a 10 out of 10. A meal is never complete until you’ve had something sweet. We ordered the s’mores French toast, which was a warm brioche stuffed with Nutella and marshmallows. This reminded me of the endless amount of exercising my body needs! One word to describe Eggspectation would be &#39;perfect&#39;. Everything here was simple, but great, and in addition the service was spot-on. However, it&#39;s probably not that great for people seeking peace and quiet, since the atmosphere was quite lively. by Sarah Sarvath

Sushi Counter Our first few steps into the Sushi Counter were ones welcomed by cheerful faces that made us want to come there more often. We were quickly escorted to our table, which was great except that the seats were kind of uncomfortable and gave us a backache. We were then approached with menus and started off with the miso soup, which was simply delicious with tofu and seaweed in every bite. For salads, we started off with the kelp salad, which was a little too exotic of our taste, however the quinoa and salmon salad was to die for. At this point we ordered a platter of Sushi Counter California rolls, passion rainbow dragon (which tastes as good as it sounds), salmon sweet spicy rolls, tuna rolls, avocado shrimp tartare, surf &amp; turf summer rolls, shrimp

sushi, and tuna sashimi. It was all good and fresh and the aroma finished the equation to result with the best sushi I’ve ever tasted so far. We ended it with macaroons for dessert, which were amazing. Overall we found Sushi Counter to be great, and probably one of the best places to try fresh and tasty sushi. by Abdullah Ali 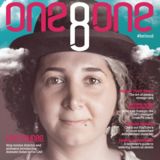