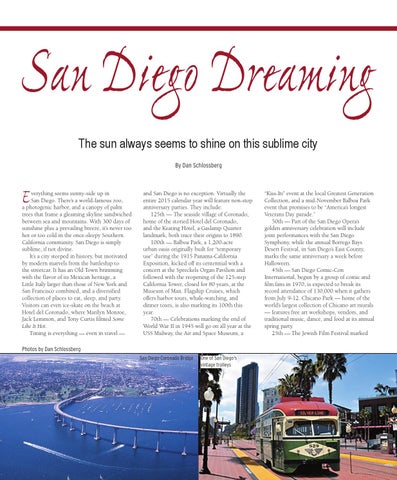 verything seems sunny-side up in San Diego. There’s a world-famous zoo, a photogenic harbor, and a canopy of palm trees that frame a gleaming skyline sandwiched between sea and mountains. With 300 days of sunshine plus a prevailing breeze, it’s never too hot or too cold in the once-sleepy Southern California community. San Diego is simply sublime, if not divine. It’s a city steeped in history, but motivated by modern marvels from the battleship to the streetcar. It has an Old Town brimming with the flavor of its Mexican heritage, a Little Italy larger than those of New York and San Francisco combined, and a diversified collection of places to eat, sleep, and party. Visitors can even ice-skate on the beach at Hotel del Coronado, where Marilyn Monroe, Jack Lemmon, and Tony Curtis filmed Some Like It Hot. Timing is everything — even in travel —

and San Diego is no exception. Virtually the entire 2015 calendar year will feature non-stop anniversary parties. They include: 125th — The seaside village of Coronado, home of the storied Hotel del Coronado, and the Keating Hotel, a Gaslamp Quarter landmark, both trace their origins to 1890. 100th — Balboa Park, a 1,200-acre urban oasis originally built for “temporary use” during the 1915 Panama-California Exposition, kicked off its centennial with a concert at the Spreckels Organ Pavilion and followed with the reopening of the 125-step California Tower, closed for 80 years, at the Museum of Man. Flagship Cruises, which offers harbor tours, whale-watching, and dinner tours, is also marking its 100th this year. 70th — Celebrations marking the end of World War II in 1945 will go on all year at the USS Midway, the Air and Space Museum, a

One of San Diego's vintage trolleys

“Kiss-In” event at the local Greatest Generation Collection, and a mid-November Balboa Park event that promises to be “America’s longest Veterans Day parade.” 50th — Part of the San Diego Opera’s golden anniversary celebration will include joint performances with the San Diego Symphony, while the annual Borrego Bays Desert Festival, in San Diego’s East County, marks the same anniversary a week before Halloween. 45th — San Diego Comic-Con International, begun by a group of comic and film fans in 1970, is expected to break its record attendance of 130,000 when it gathers from July 9-12. Chicano Park — home of the world’s largest collection of Chicano art murals — features free art workshops, vendors, and traditional music, dance, and food at its annual spring party. 25th — The Jewish Film Festival marked