European Union Enlargement of 2004 and Beyond 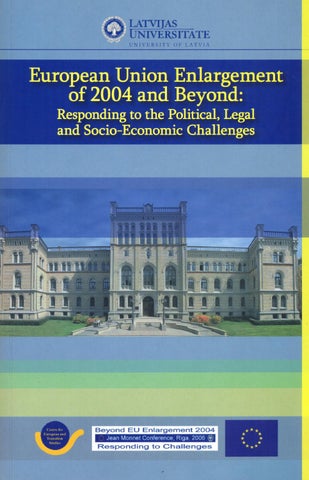 Responding to Challenges I

European Union Enlargement of 2004 and Beyond: Responding to the Political, Legal and Socio- Economic Challenges

of the European Constitution

in an Enlarged Union

Peter Van Elsuwege The Impact of EU Enlargement on the Triangular Relationship between the EU, Russia and the Baltic States

Fabrizio Tassinari A Synergy for the Black Sea Region: Guidelines for an EU Initiative

ISSUES IN THE ENLARGEMENT

in the Baltic States: to be or not to be?

Morten Hansen Why it is Fair - and Why it is Unfair - to Keep Latvia out of the Eurozone?

[ens Lowitzsch, Stefan Hanisch The Way to a European Framework for Financial Participation

leroen Dubois, [uli]ÂŤ Sproge Free Movement of Workers in the Second Phase of the Transitional Arrangements: the Case of Belgium

Artjoms Ivlevs Migration and Foreign Direct Investment in a Globalization Context: the Case of a Small Open Economy

Paolo Ruspini Forms and Features of the Post-Enlargement

PART V. CONVERGENCE AND NON-CONVERGENCE IN EUROPEAN POLICIES AND PERCEPTIONS

Security Interests in a Wider Europe

Iveta Reinholde Is there a Possible Unified Public Administration

in Latvia Before and after EU Accession

Gizem Onay The Negotiation Process between Turkey and the EU: Current and Prospective Problems

Vytautas Kaminskas, Kestutis Krisiiunas Towards Lithuania of Knowledge: Challenges and Realities of the Higher Education Sector

The National University at Home and in the World

Introduction This volume presents research papers in conjunction with the Jean Monnet Conference &quot;European Union Enlargement of 2004 and Beyond: Responding to the Political, Legal and Socio-Economic Challenges:&#39; The conference was held in Riga at the University of Latvia on April 20 - 22, 2006 as the principal component of the European Commission Jean Monnet Action programme, carried out by the Centre for European and Transition Studies at the University of Latvia. The Jean Monnet Conference and the collected papers in this volume are an attempt to provide multiple perspectives to the study of EU enlargement. The volume will be published very near the time of accession of a further two East European countries: Bulgaria and Romania. This is a propitious moment to examine the results of previous enlargements and make forecasts about the future, as we expect that the very fast pace of enlargement of recent years will not be sustained in the near future. The importance of the enlargement of 2004 can be characterised in many ways, however, one of them in particular stands out: the inclusion of Central and most of Eastern Europe decisively ended the former east-west division of the Soviet era. It signified the role of a united Europe in the spread of democratic values. It has been noted that economic efficiency is by no means the only measure of success of the European Union, and that peace and security rank prominently among the criteria. Nevertheless, the 2004 enlargement remains a controversial topic, as of course is the current and any future enlargement. The task of bringing the economies of the new member states up to par with the economies of the old member states is formidable. Building sustained economic growth in the new member states will require an unprecedented level of political, economic, and social cooperation among governments, businesses, and individuals throughout Europe. As many of the studies in this volume show, the process did and does produce mixed results. The European Union has clearly widened, now it needs further deepening. The addition of East European countries will enlarge the internal market of the EU, and is expected to eventually increase the EU&#39;s global competitiveness. Among the papers in this volume there is a thread of hopefulness that with enlargement will come a strengthening of the geopolitical influence of the EU, and that a stronger voice of Europe will make for a more balanced world - better in dealing with the benefits and problems of globalisation. This volume provides information, research, and opinion that should be useful for academics and students specialising in EU topics, and for policy makers at national and international levels, including those of EU institutions. It is a demonstration of the function of the European Commission Jean Monnet Action programme in its promotion of excellence in teaching and research. The Jean Monnet Action programme helps European social sciences to become bolder, to break new ground and test new ideas. The programme provides an important stimulus for those in higher education and research to respond to the demands of a rapidly changing world far beyond the boundaries of Europe.

The collection of studies in this volume contains both theoretical and applied research. The focus is on the new member states, be they current or prospective. The papers contribute to the objective debate on political, socio-economic and legal aspects of EU enlargement from a multidisciplinary perspective. It is our hope that this volume will generate interest in European Studies among old and new EU members, prospective members, EU neighbours, and anybody studying developments in Europe. The collection of papers is headed with a keynote address by Clive Archer on the analysis of the &#39;Enlarged Europe: Current Issues and Future Challenges: Authors&#39; contributions include topics on the European constitution, legal systems, and neighbourhood policy that are critical for the future development of the European Union. A variety of economic and social issues such as labour migration, energy policy, and governance of the European Union institutions are also covered in the volume. As suggested by the final chapter, all of this should add up to increasing the fund of knowledge about the European model, giving high priority to establishing new or enhanced research networks for continued debate and open dialogue about information, analysis, innovation, and recommendations for community policy within the development of the European Common Education and Research Area.

Acknowledgements This volume of research papers is the principal component of a European Commission Jean Monnet Action programme and the outcome of the Jean Monnet Conference &quot;European Union Enlargement of 2004 and Beyond: Responding to the Political, Legal and Socio-Economic Challenges&quot;. The Project was carried out by the Centre for European and Transition Studies at the University of Latvia. We gratefully acknowledge the European Commission DG Education and Culture support. The achievements of the Project and the organisation of the Conference would not have been possible without the financial support of the University of Latvia. It also would not have been possible without support of the Conference Board and Advisory Board: Pro£. Clive Archer, Dr. Ringolds Balodis, Dr. Daina Bara, Prof. Par Hallstrorn, Dr. Roswitha King, Dr. Andreas Knaul, Prof. Kestutis Krisciunas, Prof. Juris Krurnins, Pro£. Friedrich Lehmann, Prof. Rutger Lindahl, Prof. Zaneta Ozolina, Prof. Wolfgang Voegeli. Many thanks to all! We thank Artis Purins for his efforts during the application process. It is to the credit of the Project&#39;s Organising Committee that the Conference proceeded efficiently and enjoyably. We thank Liga Sondore for organisational work of the conference and the book publishing. We also thank Dr. Roswitha King, Ceslavs Grzibovskis, Morten Hansen and Rita Bravarska for devoting their time in the editing of this volume as well as lrina Rezepina for the financial management. Edmunds Zeltits created and maintained the Project&#39;s webpage and provided vital communication links. Special thanks go to the keynote speakers who set the tone for the Conference with their well-nuanced contributions. And finally our acknowledgement goes to all participants enthusiasm made the Project an unforgettable experience. December 2006

of the Project. Their

European Union Enlargement of 2004 and Beyond

This volume presents research papers in conjunction with the Jean Monnet Conference "European Union Enlargement of 2004 and Beyond: Responding to the Political, Legal and Socio-Economic Challenges:' The conference was held in Riga at the University of Latvia on April 20 - 22, 2006 as the principal component of the European Commission Jean Monnet Action programme, carried out by the Centre for European and Transition Studies at the University of Latvia. This volume provides information, research, and opinion that should be useful for academics and students specialising in EU topics, and for policy makers at national and international levels, including those of EU institutions. 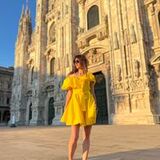