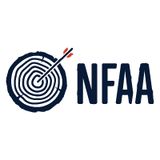 The National Field Archery Association is a non-profit corporation dedicated to the sport of archery. The NFAA was founded in 1939 is now the largest archery membership organization in the United States.