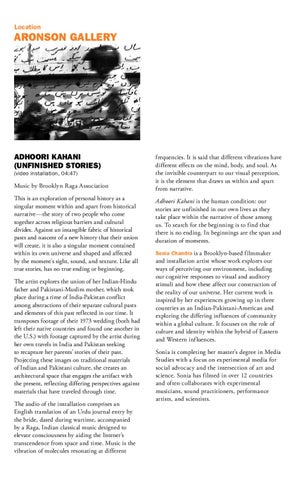 Music by Brooklyn Raga Association This is an exploration of personal history as a singular moment within and apart from historical narrative—the story of two people who come together across religious barriers and cultural divides. Against an intangible fabric of historical pasts and nascent of a new history that their union will create, it is also a singular moment contained within its own universe and shaped and affected by the moment&#39;s sight, sound, and texture. Like all true stories, has no true ending or beginning. The artist explores the union of her Indian-Hindu father and Pakistani-Muslim mother, which took place during a time of India-Pakistan conflict among abstractions of their separate cultural pasts and elements of this past reflected in our time. It transposes footage of their 1973 wedding (both had left their native countries and found one another in the U.S.) with footage captured by the artist during her own travels in India and Pakistan seeking to recapture her parents’ stories of their past. Projecting these images on traditional materials of Indian and Pakistani culture, she creates an architectural space that engages the artifact with the present, reflecting differing perspectives against materials that have traveled through time. The audio of the installation comprises an English translation of an Urdu journal entry by the bride, dated during wartime, accompanied by a Raga, Indian classical music designed to elevate consciousness by aiding the listener’s transcendence from space and time. Music is the vibration of molecules resonating at different

frequencies. It is said that different vibrations have different effects on the mind, body, and soul. As the invisible counterpart to our visual perception, it is the element that draws us within and apart from narrative. Adhoori Kahani is the human condition: our stories are unfinished in our own lives as they take place within the narrative of those among us. To search for the beginning is to find that there is no ending. In beginnings are the span and duration of moments. Sonia Chandra is a Brooklyn-based filmmaker

and installation artist whose work explores our ways of perceiving our environment, including our cognitive responses to visual and auditory stimuli and how these affect our construction of the reality of our universe. Her current work is inspired by her experiences growing up in three countries as an Indian-Pakistani-American and exploring the differing influences of community within a global culture. It focuses on the role of culture and identity within the hybrid of Eastern and Western influences. Sonia is completing her master’s degree in Media Studies with a focus on experimental media for social advocacy and the intersection of art and science. Sonia has filmed in over 12 countries and often collaborates with experimental musicians, sound practitioners, performance artists, and scientists.

Mixed Messages is an annual graduate student showcase presented by the Department of Media Studies and Film at The New School. Selected by a panel of distinguished jurors, the winning works represent the year's best in film, video, audio, and multimedia at The New School. 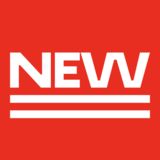