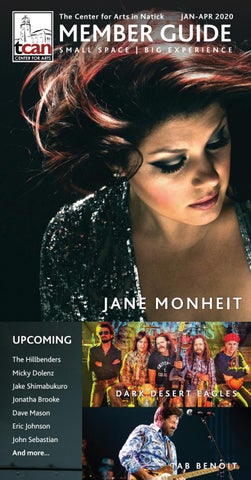 The Center for Arts in Natick

Dear TCAN Members, First things first – I want to thank the 406 renewing members who participated in our 2019 Member Drive in November/December, and offer a heartfelt welcome to 199 new members receiving this Member Guide for the first time. Thanks for supporting the arts at TCAN! You are part of a community of over 2,000 contributing TCAN members, enough to fill Boston’s Wilbur Theater twice (well, almost!).

OUR SINCERE THANKS TO THESE GENEROUS SPONSORS:

A chronological journey of The Who’s legendary catalog through the wood and wire of bluegrass instrumentation. With a rolling banjo, intense dobro percussion, and thunderous vocals, the Hillbenders have Who fans pumping their fists and singing along! $35 public | $30 members

Route 9 East, Natick, MA Service and sales 24/7 at: www.metrowestsubaru.com Call us toll free at 1-888-METROWEST Convenient from Anywhere Expect the Best at MetroWest!

The Breakers are a no-frills rock band who meticulously encompass the Tom Petty sound and musically establish an emotional connection with the crowd for the most genuine sounding Petty experience in the country. $20 public | $18 members ROCK

Grammy-nominated vocalist and electric harpist Deborah Henson-Conant (“DHC”) travels the world with the instrument she invented – the “DHC Electric Harp”. With her wicked sense of humor, gutsy set of vocal chords and theatrical flair, she uses her wearable-electric harp as a partner in her music and story-telling as she layers sounds with her looper pedal to creates rhythmic grooves. $26 public | $24 members

With only four strings, Jake Shimabukuro is a humble master whose mission is to connect and inspire people as he takes the ukulele to places no one has gone before, performing awe-inspiring music that ranges from jazz, blues, and rock to bluegrass, classical, and folk. $70 public | $65 members

Larger than life blues figure Popa Chubby has a lot of reasons to feel lucky this year. 2020 marks the 30th anniversary of his emergence as a powerful force in the venerable New York blues scene with his own unique brand of hard-hitting, face-melting, blues rock n’ funky soul. $30 public | $25 members

Rock and Roll Hall of Famer Dave Mason’s Feelin’ Alright Tour will feature all the classic songs fans love such as Only You Know And I Know, We Just Disagree, Every Woman, All Along The Watchtower, Rock N Roll Stew, and, of course, Feelin’ Alright. In addition, you will hear songs that have inspired him, as well as personal stories about rock music that only can be told by a man who has walked that historical path. Mason will be joined by his band: Johnne Sambataro on guitar & vocals, Alvino Bennett on drums, and Anthony Patler on bass, keyboards & vocals. $85 public | $75 members SPONSORED BY CAPTAIN MARDEN’S SEAFOODS

For more than two decades Jonatha Brooke has created shining musical gems – brilliant combinations of poetic lyrics, complex harmonies, and memorable melodies. Her latest album, Imposter, captures the whimsy and complexity of her writing while leaving a lasting impression on all her devoted fans. $35 public | $30 members ROCK

RIGHT THERE WITH Local Theater Giving back to the communities we serve has always been a vital part of our community mission. As long as it’s local, we’ll want to help. We are proud of where we stand. Right there with you.

Boston comedian Lenny Clarke has been performing since the 1980s as part of the great local comedy scene that included Denis Leary, Steven Wright, and many more. Come enjoy a night of Clarke’s distinctive Boston-based humor, along with an entourage of fellow area comedians. $30 public | $25 members

One of the most impressive guitarists to emerge from the rich Bayous of Southern Louisiana in years, Tab Benoit’s guitar tone can be recognized before his Otis-Reddingish voice resonates from the speakers. A Grammy-nominated singer, songwriter, and guitarist, Benoit has built a remarkable 30+ year career on the foundation of his gritty and soulful Delta swamp blues. Along the way he has acquired a devoted legion of fans, as well as 5 Blues Music Awards, including BB King Entertainer of the Year (twice) and an induction into The Louisiana Music Hall of Fame. $46 public | $42 members

Over four decades the contributions of John Sebastian have become a permanent part of our American musical fabric. His group The Lovin’ Spoonful played a major role in the mid-’60s rock revolution with songs like Do You Believe In Magic?, You Didn’t Have To Be So Nice, Daydream, Younger Girl, and Summer In The City. $45 public | $40 members SINGER-SONGWRITER

Known for her engaging and energetic live show, Werner continues her reign as one of the most creative forces on the acoustic music scene today. She effortlessly slides between folk, jazz, and pop, all delivered with sassy wit and classic Midwestern charm. $32 public | $28 members

Southern blues-rock guitar wizard, vocalist and songwriter Tinsley Ellis has become a bona fide worldwide guitar hero with his signature molten licks, melodic riffs, and rousing intense solos. According to Ellis, his latest album, Ice Cream In Hell, is the most raw-sounding, guitar-drenched album of his career. $30 public | $26 members COMEDY

Ellis Paul is one of those gifted singer-songwriters. A singular storyteller, a musician whose words reach out from inside and expresses the feelings, thoughts and sensibilities that most people can relate to in one way or another, regardless of age or upbringing. Paulâ&#x20AC;&#x2122;s 20th album, The Storytellerâ&#x20AC;&#x2122;s Suitcase, is the first that he produced himself and is the first on his Rosella label. The album contains 13 tracks and a 30-page booklet with drawings, lyrics and backstories for each song. $28 public | $24 members

Called “one of America’s very best singersongwriters” by The New Yorker, Dar Williams brings her intimate folk/rock stylings back to her home state. She has been captivating audiences with her sheer elegance and honesty in her folk-pop songwriting since the ’90s. $45 public | $40 members SINGER-SONGWRITER

Drawing on her various influences across folk-pop, classic rock, soul, blues, and country, Crystal Bowersox makes music that resonates with her spirit. Often singing with a belting soulful style, she brings to mind the stylings of Bonnie Raitt and even Janis Joplin. $30 public | $26 members

Carrie Newcomer is a Grammy-winning songwriter and recording artist who has performed with Mary Chapin Carpenter and Alison Krauss. She will be joined by pianist Gary Walters for a dynamic interweaving of music, poetry, prose, and personal stories. $28 public | $25 members

Celebrating a decade together, The Sweet Remains are headed by 3 gifted singersongwriters, each of whom contributes to the writing and 3-part harmonies that define the band’s sound. Driven by strong lyrical and melodic writing, their songs easily appeal to fans of modern folk-rockers like Jason Mraz, Ray LaMontagne, and John Mayer. However, it is their lush harmonies that distinguish them from the throngs of guitar-toting troubadours and harken back to super-groups of the ‘60s and ‘70s like CSN, The Eagles, and Simon & Garfunkel. $25 public | $22 members order online | natickarts.org/calendar | 508.647.0097

Since its founding in 2006, Opera del West, helmed by Eve Budnick, brings fully staged—if fringe—opera to the MetroWest area of Massachusetts and provides a space for young professional singers to tackle exciting roles. They will be returning to the stage for another thrilling operatic performance. Stay tuned for more information.

The second annual MetroWest Student Film Festival is now open for submissions! The MWSFF is open to high school students between the ages of 14 - 19 residing in the MetroWest region. For all submission info and rules, visit us at natickarts.org/mwsff Submission deadline is February 2, 2020

The Folk/Acoustic Open Mic night at TCAN has been a tradition since its inception in 1997. Folk Open Mic provides an intimate and supportive atmosphere for acoustic performers of all abilities to showcase their talents and partake in the areaâ&#x20AC;&#x2122;s most vibrant folk/acoustic music community. All musicians and spoken word performers are invited to participate.

The Summer Street Gallery is located in TCANâ&#x20AC;&#x2122;s main lobby and performance hall and features some of the most accomplished artists in the region. The Gallery not only provides an opportunity for our patrons to see exhibits by local artists, but to also support the visual artist community. The Gallery is open to the public during regular TCAN business hours.

To become an exhibitor , please visit us at natickarts.org/artist/summer-street-gallery

Stacey Peasley’s music has entertained and engaged families for over a decade. She delights audiences with her contagious energy and creativity while performing, writing and teaching! Her lively act engages kids and creates memorable and fun sing-along songs. $12 adult | $10 children

THE WACKY SCIENCE SHOW WITH MIKE BENT FEB 1 | 11AM

Get ready for an award-winning show that teaches that science can be exciting and fun! Kids participate in high energy, hands-on lessons. One of the best science shows your children will ever see! $12 adult | $10 children

Featuring a dozen lavishly costumed 30” marionettes, the story unfolds as the pages of a giant book open to reveal each beautifully painted setting with all your favorite Cinderella characters. $12 adult | $10 children

JOHNNY PEERS AND THE MUTTVILLE COMIX APR 4 | 11AM

Johnny Peers and his personality-plus canines are coming to tickle your funny bone! A show for the whole family and the dog lover in all of us, the show stars mostly dogs rescued from shelters or pounds. $12 adult | $10 children

Ellis Paul is an award winning perfomer of childrens’ music! Ellis tells riveting stories by making “real music” for children. He delivers messages of peace, unity, and a sense of the planet as a unified whole. $12 adult | $10 children

Since 1988, Stonegate Group has specialized in real estate development, consulting, and property management throughout the Greater Boston area. Quality, style, innovative design, and exceptional craftsmanship is what has set our development projects apart from other properties. For over 30 years, Stonegate Group has had the vision to see past the ordinary to ensure that our projects are second to none. REAL VISION IN REAL ESTATE D_v_lopm_nt ● Consulting

Pocket Full of Tales presents a boutique style theatre workshop, for students of all experience levels. Each class is a unique, small-group experience where every child receives organic, process-based training in the theatre arts from experienced performing artists. Workshops are a space to explore, experiment, and engage in the performing arts, through stories inspired by popular classics, adapted specifically for young performers by a team of international composers and our in-house playwright/director. Program Director: Kristy Pace pocketfulloftales.com See our website for more information natickarts.org/class-sections

Full show descriptions are located on our website at natickarts.org/program/school-vacation-theater-workshops

Full show descriptions are located on our website at natickarts.org/program/summer-theater-workshops 24

THE VERVE HOTEL HAS JOINED TAPESTRY COLLECTION BY HILTON. A Celebration of 20th Century American Pop Culture. Stop in and see What’s New!

ASLEEP AT THE WHEEL

THE CENTER FOR ARTS IN NATICK 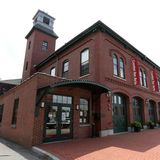