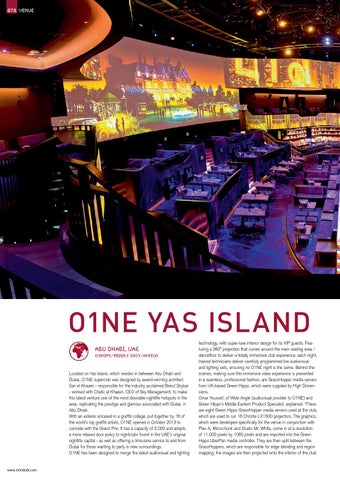 Located on Yas Island, which resides in between Abu Dhabi and Dubai, O1NE superclub was designed by award-winning architect Sari el Khazen - responsible for the industry acclaimed Beirut Skybar - worked with Chafic el Khazen, CEO of Sky Management, to make this latest venture one of the most desirable nightlife hotspots in the area, replicating the prestige and glamour associated with Dubai, in Abu Dhabi. With an exterior encased in a graffiti collage, put together by 16 of the world’s top graffiti artists, O1NE opened in October 2013 to coincide with the Grand Prix. It has a capacity of 2,000 and adopts a more relaxed door policy to nightclubs found in the UAE’s original nightlife capital - as well as offering a limousine service to and from Dubai for those wanting to party in new surroundings. O1NE has been designed to merge the latest audiovisual and lighting

technology, with super-luxe interior design for its VIP guests. Featuring a 360º projection that curves around the main seating area / dancefloor to deliver a totally immersive club experience, each night, trained technicians deliver carefully programmed live audiovisual and lighting sets, ensuring no O1NE night is the same. Behind the scenes, making sure this immersive video experience is presented in a seamless, professional fashion, are GrassHopper media servers from UK-based Green Hippo, which were supplied by High Dimensions. Omar Youssef, of Wide Angle (audiovisual provider to O1NE) and Green Hippo’s Middle Eastern Product Specialist, explained: “There are eight Green Hippo GrassHopper media servers used at the club, which are used to run 16 Christie LX1500 projectors. The graphics, which were developed specifically for the venue in conjunction with Plan A, Microchunk and Studio Mr. White, come in at a resolution of 11,000 pixels by 1080 pixels and are imported into the Green Hippo UberPan media controller. They are then split between the GrassHoppers, which are responsible for edge blending and region mapping, the images are then projected onto the interior of the club

The May/June 2014 issue of mondo*dr is now available to read online here.

The May/June 2014 issue of mondo*dr is now available to read online here.