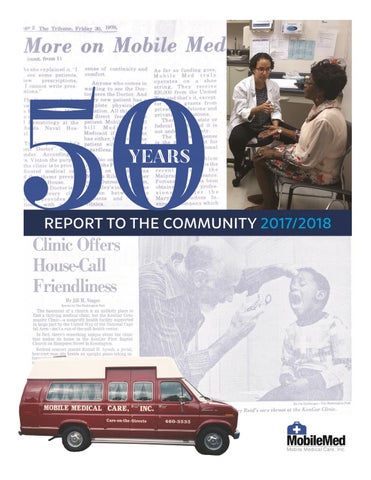 Our Mission To improve the health of lowincome people who face the greatest barriers to care access.

Our Vision To be a primary care medical home— providing high quality, comprehensive healthcare, delivered in a culturally and linguistically appropriate manner.

Our Core Values Healthcare access for all; quality services provided with compassion, respect and cultural sensitivity; and organizational excellence and integrity.

Message from the President and Executive Director In 1968, as Montgomery County schools were first integrating, Drs. George Cohen and Herman Meyersburg were volunteering as tutors in the KenGar neighborhood. They became aware that many of the children’s parents suffered from untreated health problems because they had no access to affordable healthcare. With other volunteers, they decided to open a clinic to treat those adults, and launched MobileMed in a church basement. As Dr. Meyersburg later reminisced, “Everyone said we’d fold in a month. It was a bad diagnosis on their part.”

Fifty years later, MobileMed remains an essential community health resource, a primary care medical home for thousands of low-income individuals. Following in our co-founders’ footsteps, we provide high-quality healthcare to residents in need. MobileMed has adapted to the changing face of Montgomery County by: employing bilingual staff; establishing culturally-specific clinics; integrating behavioral health into our primary care model; and developing valuable collaborations with diverse community groups. We now operate ten accessible clinics throughout the County, including three mobile van sites and two specialty clinics. In FY2018, MobileMed delivered a record number of medical and behavioral health encounters, addressing the increasing need among those most vulnerable. Reaching the milestone of 50 years of community service called for a celebration. It was our privilege to welcome MobileMed supporters as we honored George Cohen at our 50th Anniversary Gala in October. Our Honorary Co-Chairs Catherine and Ike Leggett served as emcee and presenter. Board member Dianne Guillory spoke movingly about what MobileMed has meant to her, and Dr. Cohen warmly thanked supporters and reflected on the MobileMed’s impact over the years. The support of the community remains absolutely essential to our success. MobileMed is deeply grateful to our generous donors and dedicated volunteers; to our elected officials and the Montgomery County DHHS; to our hospital partners and community collaborators; and, finally, to our outstanding staff, who are always willing to go above and beyond for our patients. Looking ahead to the next 50 years, MobileMed will continue to make a difference as a provider of quality, comprehensive primary care. With your help, we plan to be here for the thousands of disadvantaged residents in need.

Medical encounters provided at low or no cost

Dedicated clinical providers who volunteer their time for our patients

THANK YOU to our Collaborative Partners Adventist HealthCare

Montgomery County Coalition for the Homeless

THANK YOU to our Organizational Supporters Adventist HealthCare The Cafritz Foundation 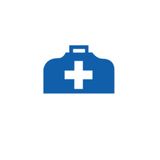