The scene is set in a dimly lit sewer, the only source of light being the gloomy purple sky coming through the 3 drain covers placed at the top of the upstage wall and the refractions off the water ceaselessly streaming in. The wall and ceiling is made of Victorian brick, bleached white in places from the decades of piss and shit.

Below each of the drain covers is a set of iron steps, cast into the brickwork. The walls are plastered in vernacular material of all purposes – layers stacked upon layers create a topographically countoured landscape of arbitrary ephemera.

Along the downstage floor is the stream of sewage water and ahead of that a sheer curtain covering the whole stage, with similar ephemera appended backwards. Stood upstage left is C, a short but gaunt-looking individual with unbrushed greasy blonde hair and black face mask. When the curtain rises, C is pasting a new addition to the mass of paper to the top of the wall with a long brush. In red outlined letters HAVE YOU SEEN THIS DOG?

below in black DO NOT APPROACH, CALL or TRY TO GRAB…HE WILL RUN!

a washed out photograph of a black and white beagle and signed off with www.haveyouseenralph.com

He stands back to admire the piece when a clambering of footsteps is heard. Seen coming down the ladder to the right of the stage is P. When C sees that it’s P he lets out a sigh of relief.

P reaches the bottom of the ladder and C takes an envelope out of his pocket. The two meet in the middle. C (passing him the envelope) Here you go, only a few this week but I’d like you to enlarge them a lot more this time please. Scale them up to A2 at least. Should be able to meet you at about midday (points upwards) same place? (P nods) Good stuff. It’s a lovely Pecorino…smelly stuff though, so be careful.

P mumbles some form of thanks and remains where he is, looking at the gallery of tat and then to C, who is unaware of being watched, posting a tiny business card to the wall. After a minute, he turns to see P is still there in surprise. They stare for a second, then C lowers their mask revealing a bleached white upper lip. C Sorry, was there anything else? P Oh no, sorry (looking around again) I was just…what is this, exactly? C My collection of stuff…things that you don’t see around for long. Cafe flyers, gig posters, preachy pamphlets, flag postcards, theatre tickets, bus cards, cereal boxes, way out signs…Anything that you can think of that would usually be thrown in the bin or banished by the Bureau and replaced with something shiny, new and acceptable… I collect it and preserve it down here. Like a museum of grime, covered in grime.

C looks impressed with this name but P mumbles in reply again, still looking around. C (with a pinch of impatience) What is it? P (with trepidation) I just er… don’t understand why? These…things are never 11

going anywhere else, why do you spend so much time over them? So much labor over the smallest of details that only a small number of people will ever see? C What do you mean? What’s the point of any of this (signalling to the void around them) if it isn’t for the small details? P (shrugging defensively) Suppose so, I don’t know I’m not an expert. It’s interesting…good. C Well, that’s not constructive. What am I supposed to do with that? Good? And if you’re not an expert then why should I listen to your analysis of it being good?

P opens his mouth to speak but words fail him so he shrugs again. C You don’t need to be “an expert” to look at something and form an opinion. I’m no experP I think the problem I have is that I don’t understand it. C What? You don’t understand the words or something? P No it’s not that…I just don’t get why you’re doing (signals to the void around them) this…I don’t get why it’s relevant. C (sharply) Well it’s alright saying that now when I’ve gone and done it all! P (attempting to backtrack) I mean… it makes sense to you and with the context and everything, I just don’t get how it’s relevant to (signals above) everything else.

They stand in an awkward silence momentarily, with an occasional frustrated exhale from C.

C Well…why does it have to be relevant to (signals above) everything else? Why is it in order to be doing something worthwhile it has to be seen by others to have a purpose? Is doing something just because I want to not purpose enough? What is this superior purpose that you had in mind? Is it that I have to create things that will gain a following and eventually become popular? Further still, the ultimate purpose: money. In order to be doing something worthwhile in the eyes of you and (pointing up) others, does it eventually have to make money? Is that how fickle everything is? If so, I can see why you view these creations as being irrelevant. They are ugly and look almost designed to be unpopular. They go against any money making formula, steer clear of any sure-fire Instagram trends. In fact, you might even see them as an act of rebellion, or a dangerous endeavor, but that is because of your predisposition for money making. The difference between what is designed down here and pumped out up there is that these are artefacts of pure creativity, untampered by (pointing up) your fads. You’ve got your people up there who follow their design deities and their relevant design bibles down to the bone and churn out the same shit every day for eternity and label it creative. Label themselves as creative professionals. If we can boil the entire profession down to just 164 pages on grids, then what about it makes it a profession anyway? There’s no original thought, no creation, there’s no room for it. Up there, there’s no room for failure, no space for change, no place for anything that isn’t 100% commercially viable.

Why not have a space that means absolutely nothing, no bits and bobs with meaning. Odds and ends with reason. There’s your purpose, if that’s what you need. There isn’t one.

For a moment or two, they stand surrounded by the shitty water and shittier creations in a resolute silence. The curtains close. 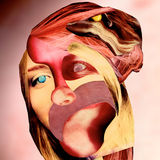