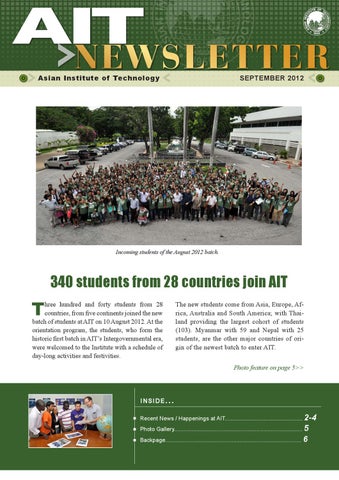 Incoming students of the August 2012 batch.

hree hundred and forty students from 28 countries, from five continents joined the new batch of students at AIT on 10 August 2012. At the orientation program, the students, who form the historic first batch in AITâ&#x20AC;&#x2122;s Intergovernmental era, were welcomed to the Institute with a schedule of day-long activities and festivities.

The new students come from Asia, Europe, Africa, Australia and South America; with Thailand providing the largest cohort of students (103). Myanmar with 59 and Nepal with 25 students, are the other major countries of origin of the newest batch to enter AIT. Photo feature on page 5>>

HRH Princess Maha Chakri Sirindhorn visits AIT exhibit at the “National Science & Technology Fair 2012” HRH Princess Maha Chakri Sirindhorn graciously visited the AIT booth during her official tour of the annual National Science and Technology Fair at the Bangkok International Trade and Exhibition Centre (BITEC) on 22 August 2012. HRH Princess Maha Chakri Sirindhorn visited the AIT booth where she viewed several examples of current research being implemented at the Institute, such as a smart policeman mannequin that can detect traffic violators instantaneously. This research, spearheaded by Dr. Mongkol Ekpanyapong, Microelectronics and Embedded Systems and Mechatronics and Dr. Matthew Dailey, Coordinator of the Computer Science and Information Management field of study, both from the School of

Engineering and Technology (SET), is undergoing its final testing and is scheduled for release to the Royal Thai Police in 2-3 months.

Dr. Teerapat selected member of Board of Governors of Thai Public Broadcasting Service

Dr. Teerapat Sanguankotchakorn, Associate Professor, Telecommunications Field of Study, School of Engineering and Technology (SET) has been selected as a member of Board of Governors of Thai Public Broadcasting Service (TPBS).

Thai PBS is the first public TV broadcaster in SouthEast Asia, and functions under the Thai Public Broadcasting Service Act B.E.2008. It enjoys the status of a state agency with legal responsibility, without being a government agency or a state enterprise. Dr. Teerapat and other committee members will supervise and help the President of Thai PBS and its management team with policy inputs to facilitate its smooth functioning.

The agreement was signed by Prof. Said Irandoust, AIT President, and Prof. Neville Fernando Chairman, SAITM on 1 August 2012. SAITM plans to officially start the four-year program in October 2012, under which students will spend their first two years in Sri Lanka and will transfer to AIT during final two years. The new program will be offered by AIT’s School of Environment Resources and Development (SERD).

AIT’s man in the UNDP Asia-Pacific Human Development Report 2012 Natural Resources Management field of study’s Dr. Clemens Grunbuhel has made a mark in academic circles by contributing to the Asia-Pacific Human Development Report 2012, published by the United Nations Development Programme (UNDP). Dr. Grunbuhel is one of the principal contributors of technical background papers. The publication released in May was aimed at reinvigorating climate change dialogue by bringing people’s concerns into the fore ahead of the Rio +20 Conference.Dr. Clemens Grunbuhelhas contributed thematic case studies on Ganges-Brahmaputra and Mekong River delta regions. Dr. Clemens Grunbuhel

AIT the hub for international effort to map Philippine flood from space AIT emerged as the focal point of an international effort to produce satellite imagery and high resolution maps to aid disaster relief operations following the floods in The Philippines. Dr. Masahiko Nagai, Associate Director of AIT’s Geoinformatics Center (GIC/AIT), spearheaded efforts to create upto-date satellite-generated maps for scientists at the Manila Observatory and National Institute of Geological Sciences, University of the Philippines. Starting on August 8, while collaborating with a number of space agencies from around the world, Dr. Nagai analyzed satellite images of Metro Manila and Luzon Island taken before and during the height of the flood. On August 14 the

The Remote Sensing Technology Center of Japan (RESTEC) has signed a MoU with AIT to promote research and dissemination of remote sensing technology in the region. The MoU was signed by Mr. Kaname Ikeda, President, RESTEC, and Prof. Said Irandoust, President, AIT on 23 August 2012. The MoU aims to encourage collaboration in the field of earth observation data utilization including exchange of personnel, researchers and engineers; provision of lectures and training; and promotion of joint research and business. Signing the MoU, Mr. Ikeda stated that RESTEC was established in 1975 with a focus on remote sensing technology and capacity building. Since then, it has been working in research and development in the field of remote sensing, and has helped in spreading the results of its research work.

The MoU was signed by Mr.Victor Chan, Director of GESIE, with the AIT President, Prof. Said Irandoust on 24 August 2012. GEISIE is the only official governmental organization in province authorized to handle foreign student affairs. During the next few months, delegates from Guangdong Province will be visiting AIT to learn more about the Institute.

His research proposes a more precise way to acquire information from certain databases. The system works as a relevant knowledge-based system acquiring the objectives of identification, integration, semantic interoperability, standardization and visualization of related information for disaster. 80 participants from 15 countries / territories attended this year’s camp.

Google versus Facebook Is Google+ better than Facebook? PCWorld seems to think so. It has come up with nine reasons to shift from Facebook to Google. http://goo.gl/C5fGW

Gizmodo on the other hand claims that Google+ will never beat Facebook. Read here : http://goo.gl/i6ZvS At AIT, we have decided to embrace both channels. From this month, AIT is also on Google+.

September 2012 edition of the monthly newsletter of the Asian Institute of Technology (AIT).

September 2012 edition of the monthly newsletter of the Asian Institute of Technology (AIT).