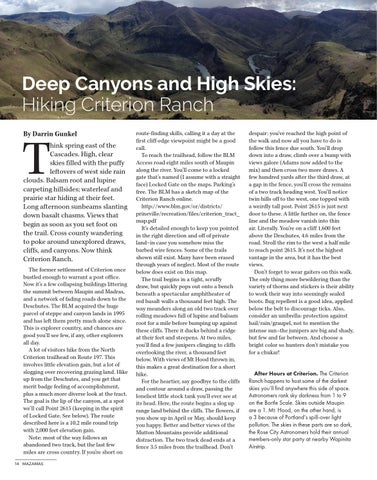 hink spring east of the Cascades. High, clear skies filled with the puffy leftovers of west side rain clouds. Balsam root and lupine carpeting hillsides; waterleaf and prairie star hiding at their feet. Long afternoon sunbeams slanting down basalt chasms. Views that begin as soon as you set foot on the trail. Cross county wandering to poke around unexplored draws, cliffs, and canyons. Now think Criterion Ranch. The former settlement of Criterion once bustled enough to warrant a post office. Now it’s a few collapsing buildings littering the summit between Maupin and Madras, and a network of fading roads down to the Deschutes. The BLM acquired the huge parcel of steppe and canyon lands in 1995 and has left them pretty much alone since. This is explorer country, and chances are good you’ll see few, if any, other explorers all day. A lot of visitors hike from the North Criterion trailhead on Route 197. This involves little elevation gain, but a lot of slogging over recovering grazing land. Hike up from the Deschutes, and you get that merit badge feeling of accomplishment, plus a much more diverse look at the tract. The goal is the lip of the canyon, at a spot we’ll call Point 2615 (keeping in the spirit of Locked Gate. See below). The route described here is a 10.2 mile round trip with 2,000 feet elevation gain. Note: most of the way follows an abandoned two track, but the last few miles are cross country. If you’re short on

route-finding skills, calling it a day at the first cliff-edge viewpoint might be a good call. To reach the trailhead, follow the BLM Access road eight miles south of Maupin along the river. You’ll come to a locked gate that’s named (I assume with a straight face) Locked Gate on the maps. Parking’s free. The BLM has a sketch map of the Criterion Ranch online. http://www.blm.gov/or/districts/ prineville/recreation/files/criterion_tract_ map.pdf It’s detailed enough to keep you pointed in the right direction and off of private land–in case you somehow miss the barbed wire fences. Some of the trails shown still exist. Many have been erased through years of neglect. Most of the route below does exist on this map. The trail begins in a tight, scruffy draw, but quickly pops out onto a bench beneath a spectacular amphitheater of red basalt walls a thousand feet high. The way meanders along an old two track over rolling meadows full of lupine and balsam root for a mile before bumping up against these cliffs. There it ducks behind a ridge at their feet and steepens. At two miles, you’ll find a few junipers clinging to cliffs overlooking the river, a thousand feet below. With views of Mt Hood thrown in, this makes a great destination for a short hike. For the heartier, say goodbye to the cliffs and contour around a draw, passing the loneliest little stock tank you’ll ever see at its head. Here, the route begins a slog up range land behind the cliffs. The flowers, if you show up in April or May, should keep you happy. Better and better views of the Mutton Mountains provide additional distraction. The two track dead ends at a fence 3.5 miles from the trailhead. Don’t

despair: you’ve reached the high point of the walk and now all you have to do is follow this fence due south. You’ll drop down into a draw, climb over a bump with views galore (Adams now added to the mix) and then cross two more draws. A few hundred yards after the third draw, at a gap in the fence, you’ll cross the remains of a two track heading west. You’ll notice twin hills off to the west, one topped with a weirdly tall post. Point 2615 is just next door to these. A little further on, the fence line and the meadow vanish into thin air. Literally. You’re on a cliff 1,600 feet above the Deschutes, 4.6 miles from the road. Stroll the rim to the west a half mile to reach point 2615. It’s not the highest vantage in the area, but it has the best views. Don’t forget to wear gaiters on this walk. The only thing more bewildering than the variety of thorns and stickers is their ability to work their way into seemingly sealed boots. Bug repellent is a good idea, applied below the belt to discourage ticks. Also, consider an umbrella: protection against hail/rain/graupel, not to mention the intense sun–the junipers are big and shady, but few and far between. And choose a bright color so hunters don’t mistake you for a chukar! After Hours at Criterion. The Criterion Ranch happens to host some of the darkest skies you’ll find anywhere this side of space. Astronomers rank sky darkness from 1 to 9 on the Bortle Scale. Skies outside Maupin are a 1. Mt. Hood, on the other hand, is a 3 because of Portland’s spill-over light pollution. The skies in these parts are so dark, the Rose City Astronomers hold their annual members-only star party at nearby Wapinita Airstrip. 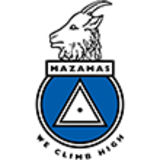 Our Hiking Issue! Discover new hikes, learn how to spring your dog from a hunting trap, and spend a year hiking Mt. Hood.

Our Hiking Issue! Discover new hikes, learn how to spring your dog from a hunting trap, and spend a year hiking Mt. Hood.