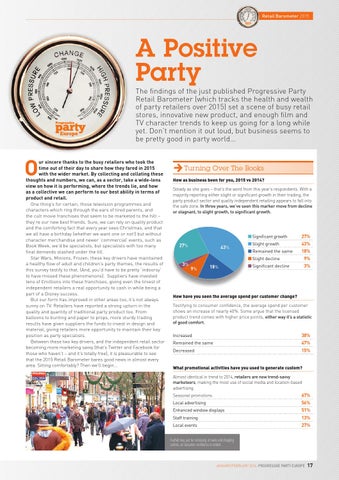 The findings of the just published Progressive Party Retail Barometer (which tracks the health and wealth of party retailers over 2015) set a scene of busy retail stores, innovative new product, and enough film and TV character trends to keep us going for a long while yet. Don’t mention it out loud, but business seems to be pretty good in party world…

ur sincere thanks to the busy retailers who took the time out of their day to share how they fared in 2015 with the wider market. By collecting and collating these thoughts and numbers, we can, as a sector, take a wide-lens view on how it is performing, where the trends lie, and how as a collective we can perform to our best ability in terms of product and retail. One thing’s for certain, those television programmes and characters which ring through the ears of tired parents, and the cult movie franchises that seem to be marketed to the hilt – they’re our new best friends. Sure, we can rely on quality product and the comforting fact that every year sees Christmas, and that we all have a birthday (whether we want one or not!) but without character merchandise and newer ‘commercial’ events, such as Book Week, we’d be specialists, but specialists with too many final demands stashed under the till. Star Wars, Minions, Frozen; these key drivers have maintained a healthy flow of adult and children’s party themes, the results of this survey testify to that. (And, you’d have to be pretty ‘indoorsy’ to have missed these phenomenons). Suppliers have invested tens of £millions into these franchises, giving even the tiniest of independent retailers a real opportunity to cash in while being a part of a Disney success. But our form has improved in other areas too, it’s not always sunny on TV. Retailers have reported a strong upturn in the quality and quantity of traditional party product too. From balloons to bunting and paper to props, more sturdy trading results have given suppliers the funds to invest in design and material, giving retailers more opportunity to maintain their key position as party specialists. Between these two key drivers, and the independent retail sector becoming more marketing savvy (that’s Twitter and Facebook for those who haven’t – and it’s totally free), it is pleasurable to see that the 2015 Retail Barometer bares good news in almost every area. Sitting comfortably? Then we’ll begin…

Turning Over The Books How as business been for you, 2015 vs 2014? Steady as she goes – that’s the word from this year’s respondents. With a majority reporting either slight or significant growth in their trading, the party product sector and quality independent retailing appears to fall into the safe zone. In three years, we’ve seen this marker move from decline or stagnant, to slight growth, to significant growth.

What promotional activities have you used to generate custom? Almost identical in trend to 2014, retailers are now trend-savvy marketeers, making the most use of social media and location-based advertising. Seasonal promotions

Footfall may just be increasing in towns and shopping centres, as consumer confidence is evident.