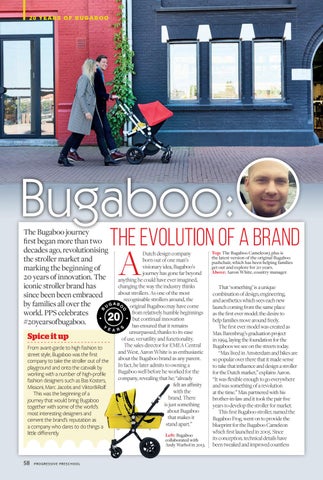 Bugaboo: The Bugaboo journey first began more than two decades ago, revolutionising the stroller market and marking the beginning of 20 years of innovation. The iconic stroller brand has since been been embraced by families all over the world. PPS celebrates #20yearsofbugaboo. Spice it up From avant-garde to high fashion to street style, Bugaboo was the first company to take the stroller out of the playground and onto the catwalk by working with a number of high-profile fashion designers such as Bas Kosters, Missoni, Marc Jacobs and Viktor&Rolf. This was the beginning of a journey that would bring Bugaboo together with some of the world’s most interesting designers and cement the brand’s reputation as a company who dares to do things a little differently.

The Evolution Of A Brand

Dutch design company born out of one man’s visionary idea, Bugaboo’s journey has gone far beyond anything he could have ever imagined, changing the way the industry thinks about strollers. As one of the most recognisable strollers around, the original Bugaboo may have come from relatively humble beginnings but continual innovation has ensured that it remains unsurpassed, thanks to its ease of use, versatility and functionality. The sales director for EMEA Central and West, Aaron White is as enthusiastic about the Bugaboo brand as any parent. In fact, he later admits to owning a Bugaboo well before he worked for the company, revealing that he; “already felt an affinity with the brand. There is just something about Bugaboo that makes it stand apart.”

Top: The Bugaboo Cameleon3 plus is the latest version of the original Bugaboo pushchair, which has been helping families get out and explore for 20 years. Above: Aaron White, country manager.

That ‘something’ is a unique combination of design, engineering, and aesthetics which sees each new launch coming from the same place as the first ever model; the desire to help families move around freely. The first ever model was created as Max Barenbrug’s graduation project in 1994, laying the foundation for the Bugaboos we see on the streets today. “Max lived in Amsterdam and bikes are so popular over there that it made sense to take that influence and design a stroller for the Dutch market,” explains Aaron. “It was flexible enough to go everywhere and was something of a revolution at the time.” Max partnered with his brother-in-law and it took the pair five years to develop the stroller for market. This first Bugaboo stroller, named the Bugaboo Frog, went on to provide the blueprint for the Bugaboo Cameleon which first launched in 2005. Since its conception, technical details have been tweaked and improved countless