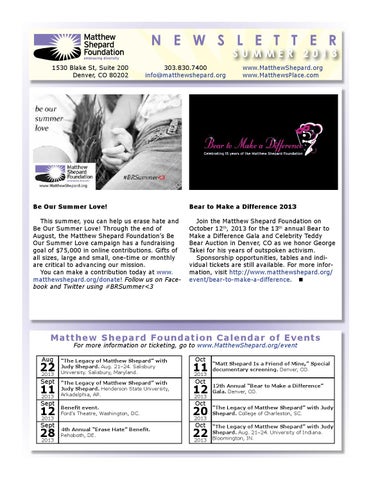 Be Our Summer Love!

Bear to Make a Difference 2013

This summer, you can help us erase hate and Be Our Summer Love! Through the end of August, the Matthew Shepard Foundation’s Be Our Summer Love campaign has a fundraising goal of $75,000 in online contributions. Gifts of all sizes, large and small, one-time or monthly are critical to advancing our mission. You can make a contribution today at www. matthewshepard.org/donate! Follow us on Facebook and Twitter using #BRSummer&lt;3

Join the Matthew Shepard Foundation on October 12th, 2013 for the 13th annual Bear to Make a Difference Gala and Celebrity Teddy Bear Auction in Denver, CO as we honor George Takei for his years of outspoken activism. Sponsorship opportunities, tables and individual tickets are still available. For more information, visit http://www.matthewshepard.org/ event/bear-to-make-a-difference. n

“Matt Shepard Is a Friend of Mine,” Special documentary screening. Denver, CO.

“The Legacy of Matthew Shepard” with Judy Shepard. College of Charleston, SC.

“The Legacy of Matthew Shepard” with Judy Shepard. Aug. 21–24. University of Indiana. Bloomington, IN.

Matthew Shepard Foundation Newsletter • Summer 2013 Matthew’s Place Welcomes New Youth Bloggers School’s out for summer, but things are kicking into full gear at MatthewsPlace.com, the site devoted to LGBTQ youth and allies operated by the Foundation. Matthew’s Place features interviews from celebrities and newsmakers, educational articles, and much more. A major cornerstone of site is the youth bloggers, who share their life happenings and give life to the LGBTQ youth experience through their regular posts. Matthew’s Place is pleased to welcome two new bloggers. Here’s a look at these interesting and informative young voices.

The cornerstone of MatthewsPlace.com is the youth bloggers, who share their life happenings and give life to the LGBTQ youth experience through their regular posts.

Kadeem McMillon Kadeem McMillon first submitted his coming out story as a personal story to Matthew’s Place. His powerful words, brave journey and ability to speak his truth caught our eye and captured our hearts. Hailing from East Stroudsburg, Penn., Kadeem is a college student, majoring in theater, who also holds down a full-time job in retail. This 19-year-old identifies as gay and hopes his work on Matthew’s Place will help others who may be struggling. In his coming out story, he openly and honestly detailed the racism and homophobia he has faced and his struggles for self-acceptance. Kadeem will offer on-going video blogs on Matthew’s Place. An excerpt from his coming out story: “My bullying started when I started the 6th grade. As school progressed I began to see how mean everyone was to others around me, and since my secret was safe, I thought I would never be bullied. I was so wrong.”

Lynne Peterson Matthew’s Place has bloggers who are in high school and college, and now the site will showcase the post-college life of Denver-area resident Lynne Peterson, a 22-year-old lesbian. She’s like many recent college grads now living back at home and seeking work in a recovering economy. But Lynne also is trying to figure out coming out on the job and managing interviews. She will offer written blog posts for Matthew’s Place. She writes: “Some days I am confident and hopeful that I will run into a wonderful opportunity. Other days I end up on my online banking account staring at my slowly depleting savings. No longer on a meal plan, no more parent-paid rent, and suddenly my close-knit network of college friends are all a $300 plane trip away.” n

Allies Study Laramie’s Response to Murder The progress of the LGBT movement toward greater equality is thanks in large part to the love and support of the family and friends of gay, lesbian, bisexual or transgender people. When members of our community are open and honest about their sexual orientation and gender identity, our parents, siblings and friends love us as we are and fight for our rights. The tradition that Jeanne Manford started in the basement of the Metropolitan-Duane Methodist Church in Greenwich Village in March of 1973 continues at more than 350 PFLAG Chapters in all 50 states. And so Programs and Outreach Manager, Robert House, found his way to PFLAG Boulder County to watch the documentary ‘Laramie Inside Out’ and talk about the work of the Foundation, hate crimes and LGBT rights. ‘Laramie Inside Out’ tells the story of Beverly M S F B oa r d of D i r ecto r s Judy Shepard, President Gregory Miraglia, Vice President Ron Werner, Secretary Randy Zila, Treasurer

Seckinger, who grew up in Laramie in the 1970s and graduated from the University of Wyoming in 1981. When a professor sent her an email on October 10, 1998, Bev knew that something was wrong, and when she heard what had happened to Matthew, she was shocked. The documentary is her experience of returning to her hometown and seeing how it had changed from the quiet town she used to know. By telling her story and the story of many of Matthew’s college friends, we are reminded that Matt was not the only victim of that crime. After watching the film, House talked with the 20 or so PFLAG members about the importance of telling our stories in their advocacy work as parents and friends of LGBT people. The group also talked about recent advancements of civil unions and marriage equality as well as the gaps in protection because of constitutional and statutory provision which still burden loving, committed same-sex couples. n Special thanks to

Matthew’s Story Showcased on America’s Most Famous Stage A host of dignitaries and celebrities honored longtime activists Judy and Dennis Shepard for 15 years of their courageous human rights work, at the Ford’s Theatre Gala June 2nd in Washington D.C. Vice President Joe Biden, Attorney General Eric Holder, The Honorable Valerie Jarrett, Secretary of the Interior Sally Jewell, and members of Congress were among numerous other

“All we wanted to do was make things better for his friends. We had no idea that 15 years later, people would still want to hear what we have to say.” distinguished guests participating in the Ford’s Theatre Annual Gala on June 2. As part of the program, actor Eric Stonestreet from ABC’s hit series “Modern Family” presented a moving tribute to the Shepards, parents of University of Wyoming student Matthew Shepard, who was murdered in Laramie in a 1998 anti-gay hate crime. Stonestreet said, “[Matthew’s] parents are just incredible people, and they’ve decided to use the tragedy and turn it into something good for millions of people.”

The Shepards created the Matthew Shepard Foundation after Matt’s murder. “All we wanted to do was make things better for his friends,” Judy Shepard explained. “We had no idea that 15 years later, people would still want to hear what we have to say.” The couple was recognized “for their extraordinary ability to transform their tremendous personal loss into an opportunity to inspire change through The Matthew Shepard Foundation,” the theatre said in a release. This fall, Ford’s Theatre presents a stage production of The Laramie Project, a series of powerful personal accounts based on the community’s reaction to Matthew Shepard’s death. The play is presented as part of the Ford’s Theatre multi-year Lincoln Legacy Project, an effort to generate dialogue around issues of tolerance, equality and acceptance. Susan Burk, the Matthew Shepard Foundation’s Laramie Project Specialist, also attended the Gala. She is working with Ford’s Theatre on the production as well as educational and artistic pieces associated with the Lincoln Legacy Project. n