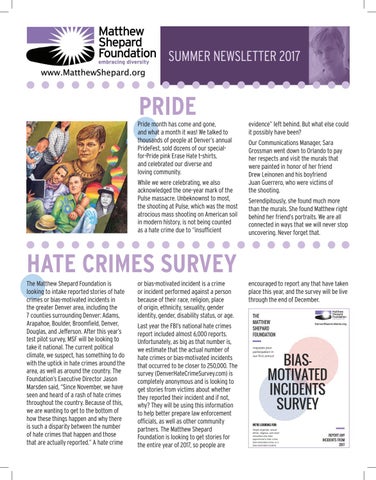 PRIDE Pride month has come and gone, and what a month it was! We talked to thousands of people at Denver’s annual PrideFest, sold dozens of our specialfor-Pride pink Erase Hate t-shirts, and celebrated our diverse and loving community. While we were celebrating, we also acknowledged the one-year mark of the Pulse massacre. Unbeknownst to most, the shooting at Pulse, which was the most atrocious mass shooting on American soil in modern history, is not being counted as a hate crime due to “insufficient

evidence” left behind. But what else could it possibly have been? Our Communications Manager, Sara Grossman went down to Orlando to pay her respects and visit the murals that were painted in honor of her friend Drew Leinonen and his boyfriend Juan Guerrero, who were victims of the shooting. Serendipitously, she found much more than the murals. She found Matthew right behind her friend’s portraits. We are all connected in ways that we will never stop uncovering. Never forget that.

HATE CRIMES SURVEY The Matthew Shepard Foundation is looking to intake reported stories of hate crimes or bias-motivated incidents in the greater Denver area, including the 7 counties surrounding Denver: Adams, Arapahoe, Boulder, Broomfield, Denver, Douglas, and Jefferson. After this year’s test pilot survey, MSF will be looking to take it national. The current political climate, we suspect, has something to do with the uptick in hate crimes around the area, as well as around the country. The Foundation’s Executive Director Jason Marsden said, “Since November, we have seen and heard of a rash of hate crimes throughout the country. Because of this, we are wanting to get to the bottom of how these things happen and why there is such a disparity between the number of hate crimes that happen and those that are actually reported.” A hate crime

or bias-motivated incident is a crime or incident performed against a person because of their race, religion, place of origin, ethnicity, sexuality, gender identity, gender, disability status, or age. Last year the FBI’s national hate crimes report included almost 6,000 reports. Unfortunately, as big as that number is, we estimate that the actual number of hate crimes or bias-motivated incidents that occurred to be closer to 250,000. The survey (DenverHateCrimeSurvey.com) is completely anonymous and is looking to get stories from victims about whether they reported their incident and if not, why? They will be using this information to help better prepare law enforcement officials, as well as other community partners. The Matthew Shepard Foundation is looking to get stories for the entire year of 2017, so people are

encouraged to report any that have taken place this year, and the survey will be live through the end of December.

MEET THE SPIRIT OF MATTHEW AWARD WINNERS We want to introduce you to two very special youth who will be our winners for the Spirit of Matthew Award. We usually only have one, but we truly could not overlook these two semifinalists. Please meet Alyssa Sileo and Jaimie Wilson:

Alyssa Sileo is a junior in high school in New Jersey, but we would never have guessed that from reading her application essay. She is the team leader for the thespian troupe responsible for The Laramie Project Project – a, well, project that has reached out and connected with groups around the world putting on The Laramie Project this year. The purpose of the project was to honor each of the 49 victims of the Pulse shooting by facilitating 49 community productions of The Laramie Project throughout the world (further delivering Matt’s legacy to more viewers in honor of Pulse victims), and they succeeded completing this effort in May!

Jaimie Wilson is a country singer/ songwriter, who is strumming his way to success while also advocating for transgender rights and authenticity. He didn’t have an easy time coming out as transgender and ended up having to leave his family in Michigan for Florida. Since then, he has been sharing his story on Instagram, racking up YouTube views, and truly being a voice for young transgender teens who may be afraid to be their authentic selves.

We can’t wait to have you meet them on October 14th at our Bear to Make a Difference Gala. Be sure to buy your tickets early!

STAY PROUD, BE LOUD We recently had our first “Stay Proud, Be Loud” event in Dallas, sponsored by MillerCoors. It was a great turnout! There was a hosted roundtable for local LGBTQ community leaders and police officers. After the roundtable, we headed to a local bar where we talked about the work we are doing and chatted with folks on ways to stay safe, as well as how to report hate crimes. We are looking forward to our next events, so be on the lookout for announcements on where we’ll be this fall! Special thanks to The Roundup Saloon, the Cedar Springs Tap House, and especially MillerCoors for facilitating these trainings and raising community awareness.

LOVE TRAVELS During D.C. Pride, Marriott hosted an art show of sorts. MSF was invited to send in two canvasses for their big #LoveTravels show: “Marriott Rewards is launching a creative movement to amplify support for the lesbian, gay, bisexual and transgender (LGBT) community through a powerfully vibrant art installation that encourages everyone to see themselves and to be themselves. #LoveTravels’ newest chapter will lend support directly to transgender lives and leaders through the dedication of the art installation.” We were honored to be asked to be a part of the installation. What do you think of our paintings, complete with love thumb prints from the staff?

CHECK OUT OUR NEW ERASE HATE T-SHIRTS! After a run of 8 years, our old t-shirts have made way for our new ones. The new design uses our 21-point sunburst, which represents Mattâ&amp;#x20AC;&amp;#x2122;s age when he died. The new shirts challenge our supporters to find their inner superhero and serve as an excellent reminder to continue to Erase Hate! Visit our online store and order yours today!

For more news about the Matthew Shepard Foundation, check out our blog: MatthewShepard.org/blog

Read the MSF Summer Newsletter for 2017