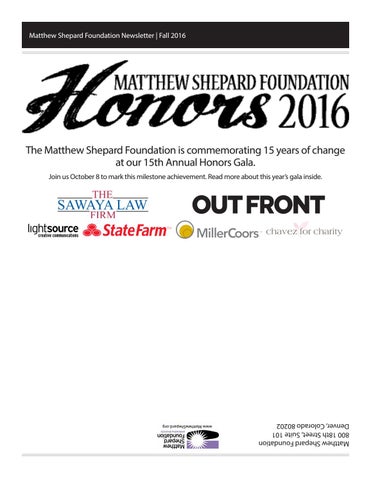 The Matthew Shepard Foundation is commemorating 15 years of change at our 15th Annual Honors Gala. Join us October 8 to mark this milestone achievement. Read more about this yearâ&amp;#x20AC;&amp;#x2122;s gala inside.

Commemorating 15 years of change What started as a local silent auction in February 2002 is now the Matthew Shepard Foundation’s biggest annual fundraising event, and we’re humbled and grateful to come together this October at our 15th Annual Honors Gala. Formerly known as the Bear to Make A Difference Gala, this annual event allows us and our dedicated supporters from around the world to come together to celebrate our community’s progress, triumph and history. To mark a milestone such as the 15th gala is satisfying not only because of the continued support for remembering Matt’s life and passion for this work, but watching the continuous growth of this movement and the undying spirit each and every one of you posses to make it possible.

Auction You can still participate in our Silent Auction if you aren’t able to attend this year’s Gala. Starting Monday, October 3, you will be able to bid on silent auction items at www.bid720.com.

Sean Hayes announced as additional award recipient The Matthew Shepard Foundation is proud to announce Sean Hayes as one of this year’s Making A Difference Award recipients. Sean is an award-winning actor and producer who got his start in the role of Jack McFarland on the sitcom Will &amp; Grace. Sean supported himself as a classical pianist and as a member of a pop band for five years while attending Illinois State University, where he majored in performance and orchestral conducting. He began his post-collegiate professional career in Chicago theatre as the musical director at the Pheasant Run Theater, where he also appeared on stage in several productions. An alumnus of Chicago’s famed Second City improvisational comedy group, Hayes began finding TV work in Chicago, notably in the series Silk Stalkings. In 1998, he made his film debut in Billy’s Hollywood Screen Kiss, in which he played the title character, a gay photographer in search of love. Sean went on to land the role of Jack McFarland in the hit NBC comedy series Will &amp; Grace, which earned him an Emmy Award in 2001. Hayes has also been honored with multiple SAG Awards, an American Comedy Award and a TV Guide Award as well as 6 Golden Globe Nominations. Outside his acting work on Broadway and TV, Hayes launched the successful production company, Hazy Mills, executive producing shows like Grimm, Hot in Cleveland, Hollywood Game Night and the up and coming CNN docuseries, The History of Comedy. Hayes lives in Los Angeles with his husband Scotty Icenogle, where they’ve produced and starred in a series of popular lip sync videos on Sean’s Facebook page. Sean shed light on his sexuality in 2010 during an interview with the Advocate, saying “I am who I am. I was never in, as they say. Never.”

New choral work to be performed at this year’s Gala

In October 1998, as news spread across the country and the world of the terrible hate crime committed against Matthew Shepard in Laramie, Wyoming, it reached a young gay countertenor working on a musical performance with conductor Craig Hella Johnson. The singer was Matt Alber, who was devastated at the hatred and sadness of the crime, especially against a fellow young gay man from the Midwest with the same first name. He hugged Johnson tearfully, feeling permanently marked by the tragedy. Eighteen years later, Alber, now a former member of Chanticleer and accomplished singer-songwriter in his own right, has played a key part in a new choral work, Considering Matthew Shepard, composed by his longtime friend Johnson. Alber sang Matthew Shepard’s own words from his journal in the piece’s world premiere this winter and on the newly released CD. Alber, with Johnson’s accompaniment, will sing a special rendition of a piece from the work to open this year’s Honors Gala in Denver. Additionally, he appears for one night only on Friday, Oct. 7 at M Uptown in a unique benefit for the Foundation. For more information, visit MatthewShepard.org/Alber.

Screening of Matt Shepard is a Friend of Mine at Texas Tech University, Lubbock, Texas