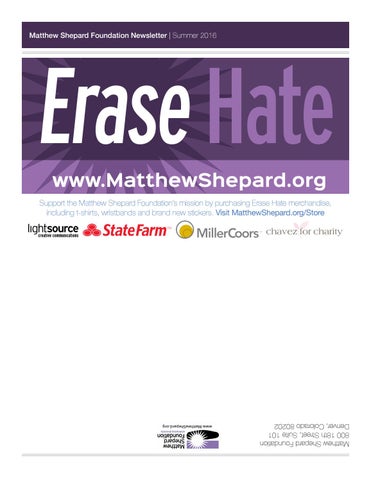 After Orlando: Confronting our anger and making change By Dennis and Judy Shepard This year, the LGBTQ+ community’s annual Pride Month was both sombre and celebratory. In Florida, the United States and around the world, we are still grieving; still processing the unspeakable hatred that claimed 49 innocent lives at Pulse in Orlando. It’s a tragedy we are all too familiar with. For almost 18 years we have lived with many of the same emotions: fear, confusion, and still after all these years, anger. We know the friends, family and loved ones of those lost are still reeling over how this happened and why. The investigation into this mass murder is still ongoing, but we’re unsure how anyone could say this wasn’t an anti-gay hate crime. Regardless of radicalization or religion or other contributing factors, it’s obvious our society still provides an environment where this type of hatred is taught. A place of long held refuge, safety and belonging was violated by hate. A community has been left helpless. Parents have been left worried. Young people struggling to define their identity have been pushed further into the closet.

How long are we going to be mad about this? How long can we hold onto this anger? Can we heal? In Matt Shepard is a Friend of Mine, the feature documentary by Matt’s and our dear friend Michele Josue, there is a moment where Michele is confronted with her own struggle to let go and allow herself to heal. In an intimate conversation, Father Roger Schmit says to Michele: “I hope you never lose being angry at this. Maybe his friends, their most important mission, is to remind the world to be angry at that. We must not ever heal from that. Never.” The pain of losing Matt has never faded. Our grief is endless, but it is our catalyst. There may never be a day we aren’t angry about what happened to our son, but it’s about taming this anger in a way that helps our society to change. We feel the need to stand up and say “Never again” until it becomes a reality. The tragedy in Orlando is a wound unlikely to heal, another dark mark in the lexicon of LGBTQ+ history. We will have to create more positive moments to somehow put it into perspective.

Coming soon! Traveling letters exhibit, “Not Alone: The Power of Response” The Matthew Shepard Foundation is excited to announce a new and more accessible version of our Traveling Letters Exhibit, “Not Alone: The Power of Response”. This exhibit is a collection of replica letters the Shepard family received from LGBTQ+ people, allies, children and politicians from all over the world in the wake of the attack on Matt’s life. Very similar to our original Letters Exhibit, curator Heather Hoagland of Ford’s Theater is creating a version that can more easily travel and be a part of productions of The Laramie Project and other events across the country to add depth and real-life voices to Matt’s story and the cultural response in 1998. For more information on this powerful exhibit: Contact Susan Burk at Susan@MatthewShepard.org or 303.830.7400 ext. 17 This exhibition was originally created by Ford’s Theatre Society, Washington, DC and Split Rock Studios, MN, as part of The Lincoln Legacy Project, Fall 2013.

On June 26, 2015, the Supreme Court of the United States legalized marriage equality nationwide. Because of this historic ruling, same-sex couples from all 50 states are now able to marry. In the year since marriage equality became law, we’ve had several supporters turn their weddings into opportunities to Erase Hate.

By Jon Terry &amp; Jonathan Schmugge “When Jonathan and I decided to get married, we realized there was nothing we really needed. Instead, we asked our guests to donate to our favorite organizations, with the Matthew Shepard Foundation being one of them. “In 1993 I was the president of the Oregon Gay and Lesbian Law Association, where I worked on the Hawaii Supreme Court case (Baehr v. Miike, originally Baehr v. Lewin) that challenged the state’s prohibition of same-sex marriage. It took us another 22 years, but in June of last year we finally saw marriage equality become a reality. Never in my lifetime did I think I’d see that happen — I remember tears of joy streaming down my face that day. “It was truly a magical day, and now Jonathan and I are able to celebrate our own. We want to make a difference in this world, and supporting all the Foundation does is part of being able to make that difference. We couldn’t think of a better way to make our wedding even more special than to support the Foundation’s vital mission to Erase Hate.”

Jon Terry and Jonathan Schmugge married on May 28, 2016, at the Denver Botanic Gardens. They currently reside in Golden, Colorado.

Do you have an upcoming graduation, wedding, anniversary, birthday or other milestone? Create your own online campaign to bring your friends and loved ones together to support the work of the Matthew Shepard Foundation. Visit MatthewShepard.org/Give

When you shop using Smile.Amazon.com and select the Matthew Shepard Foundation as your charity of choice, we’ll benefit from your purchasing efforts.

This June, Dennis and Judy Shepard traveled to Lithuania to partake in Baltic Pride in conjunction with the State Department’s continued outreach for global LGBTQ+ rights. The country, formerly occupied by the Soviet Union, has an antiLGBTQ+ propaganda law similar to that in Russia—a law they are constantly fined for by the European Union, but a law that isn’t enforced nonetheless. The Shepards, with Dennis sporting his Wyoming hat, joined civic and political leaders from all over the world including Iceland, Uganda and the European Parliament to march in the parade. With a suspected 3,000 people in attendance, Judy observed a lot of straight families and young people lining the streets in support; no shaking heads in disgust and very few protesters. A pleasant surprise for a more conservative-leading country. “Maybe we’re approaching tolerance of the gay community there,” Judy notes. Lithuania does have a hate crime law, but the Shepards said there is reluctance by police to properly investigate these crimes. During their visit Judy and Dennis met with the country’s Prosecutor General to encourage better training and build more trust between police and the LGBTQ+ community—an idea the Shepards say officials were very willing to explore and implement. Overall, Judy and Dennis consider the trip a wonderful success, adding that every year shows progress for the Baltic states.