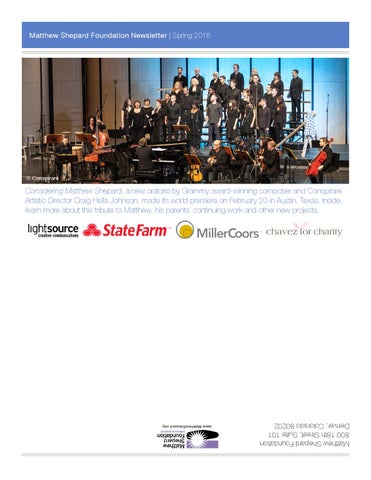 Considering Matthew Shepard, a new oratorio by Grammy award-winning composer and Conspirare Artistic Director Craig Hella Johnson, made its world premiere on February 20 in Austin, Texas. Inside, learn more about this tribute to Matthew, his parentsâ&amp;#x20AC;&amp;#x2122; continuing work and other new projects.

From the fields of Wyoming: Our kids need us

About six months ago, the new and promising PFLAG chapter in Gillette, Wyoming, asked me to come speak about risks LGBTQ+ youth face, including self-harm, suicide and substance abuse. For half a year, March 16 was on my calendar for this visit, a seemingly random date; another event to help Erase Hate. But on March 15, many in Gillette found themselves at the funeral for 20-year-old Trevor O’Brien, who a week earlier took his own life after years of bullying, harassment and assault for being gay. His story was so familiar. He was teased in first grade for being something he didn’t even know he was. Someone keyed a depraved gay slur into his car door. A five-on-one attack this winter caused injury and agony but, sadly, a fervent refusal to report the incident. Again, in my home state, I was mourning one more young person lost to pointless hatred and bigotry. When my friend Matt was killed, the media descended on Laramie. I quickly came to the defense of Wyoming and its citizens. We are good people; some of us are gay people. Wyomingites are no stereotype, but Wyoming is, to this day, a long-overdue frontier for equality, and a stark display of why the Foundation continues its work.

Bullying is a nationwide epidemic for our young people—this is not a problem unique to Wyoming or small towns. From bustling cities to farm country, LGBTQ+ youth are losing hope. It’s clear we haven’t honestly faced and erased hate that still dwells in our communities. Bluntly, we are failing our kids. Wyoming is finally starting a serious conversation about this, but it requires everyone to adopt and encourage basic respect and dignity for their fellow citizens. Wherever we live, we can improve laws that bring educators, law enforcement and behavioral health professionals together to discover and address suffering that goes unnoticed. We can extend LGBTQ+ visibility to every corner of our country to clearly tell everyone they aren’t alone. Wyoming certainly can and must join 45 of its sister states and adopt tough but fair hate crime laws. Where those laws do exist, we can all demand improved reporting and enforcement of these despicable crimes. Most of all, everyone must decide that we care about each of our fellow citizens and especially our youth. These people are suffering and need answers—now, not next school year, not next legislative session, but right now.

One of the most remarkable elements of Matthew Shepard’s continuing legacy is the powerful inspiration his life and death have provided to artists of every genre. He has motivated painters, poets, sculptors, authors, librettists, playwrights and pop stars. His story has been adapted and re-adapted, translated and taught, rehearsed and recited. It will endure in our history so long as our civilization marks meaningful events in the quest for human rights. Now joining this creative assembly comes an oratorio that will surely assume a place in the American choral music canon: Considering Matthew Shepard. A labor of love of many years’ standing for Grammy award-winning conductor Craig Hella Johnson, the 100-minute piece made its world debut this past February in Austin, Texas, Pasadena and Los Angeles. It tells the story of Matt’s life, his love of Wyoming, his murder and the shockwaves it sent throughout the LGBTQ+ community and the world media in 1998. © Conspirare

The Shepards make waves in California

On February 6, Judy and Dennis Shepard delivered the keynote address at the 17th Annual Martin Luther King, Jr. Celebration Dinner in Sacramento, California. That night, their message was simple: it’s easy to deny others equal rights if those denying already possess these rights, and as leaders and advocates for social justice, it is our job to hold those in power accountable to be inclusive and strive for true equality.

In August 2014, the Foundation’s LGBTQ+ youth site, MatthewsPlace.com, published a series on asexuality by Stormy O’Brink. In the spring of 2015 Xavia Publius, a professor in the Women’s and Gender Studies Department at Northern Iowa University, began using the series as required reading for her Introduction to LGBTQ Studies course. Xavis teaches the source every semester and uses the content in the asexuality series to familiarize students with identies other than lesbian, gay, bisexual and transgender. Xavis says: “This series provides a great introduction to identities to which many students have never been exposed as well as other topics relevant to LGBT people in a similar age bracket to my students. This creates a richer understanding of the LGBT community and some of the conversations about identity that young people are having, and makes room for voices traditionally left out of LGBT narratives. I also believe that providing students with readings in easy-to-understand language and multimedia formats increases engaged learning and balances well with formal academic writing. Specifically, I assign portions of Stormy’s ‘Ace’ series because I think including descriptions of asexuality that showcase the voices of actual people on the ace spectrum is important.”

MatthewsPlace.com explores intersexuality And on March 24, the Out &amp; Equal Momentum Gala in San Francisco honored Judy and Dennis Shepard with this year’s Outstanding Ally Award. Out &amp; Equal is a leading nonprofit dedicated to ensuring workplace equality for LGBTQ+ employees.

Blogger Stormy O’Brink, who in August 2014 wrote and developed “Ace Talk: Asexuality Uncovered”, has now published a series exploring intersexuality. O’Brink defines what it means to be intersex and dives into the politics and issues surrounding the little-understood identity. Read it at MatthewsPlace.com/Intersex

Hello! I joined the staff in June 2015 as the Foundation’s Development Director. I oversee all fundraising activities, including special events like our annual Honors Gala, donor cultivation, volunteer coordination and fostering relationships for institutional gifts from corporations and foundations. I am honored to be supporting the work of the Foundation. It mirrors my personal efforts as an advocate for LGBTQ+ equality for the past 25 years, from the Gay Games movement to support of AIDS service organizations. I am inspired by the relevant nature of our work today on behalf of LGBTQ+ youth, hate crimes prevention and spreading the message of love and acceptance. Our mission is as significant and necessary today as it was in 1998. Marriage equality is the law, yet discrimination and bigotry persist amongst our progress. As both a triathlete and a marathon runner, I understand the importance of preparing for the long-haul. Through my development efforts, I’m hopeful our supporters can help us plan for the future in the fight for true equality. I’ve been privileged to meet many of our fine supporters, and I applaud the various ways each of you embody the Foundation’s mission in your lives. But there are always new opportunities for others to get involved, and I’m excited to discover these alongside you. Have a few ideas how you could contribute to our work? I’d love to hear from you—you can reach me at Joshua@MatthewShepard.org. I am grateful to work with some of the most loyal and valued donors—Thank you for all you do to Erase Hate!

Hi! I’m the new Development Intern. I will be engaged in coordinating volunteers, assisting with general administrative duties and support surrounding the Honors Gala this October. I moved to Denver in 2010 after living in Boston for several years. Prior to that I received a bachelor’s degree in Sociology at Quinnipiac University in Connecticut. I have worked with nonprofits helping children and families prior to joining the social justice movement at the Matthew Shepard Foundation.

If you have an upcoming wedding, birthday, 5K or milestone, consider sharing your story alongside Matt’s, and encourage your friends and loved ones to join your cause. We guide you through the process of setting up your page and provide you tools to update it. Creating your page is quick and simple. Visit MatthewShepard.org/Give.

20th Annual Shepard Symposium for Social Justice at the University of Wyoming, Laramie