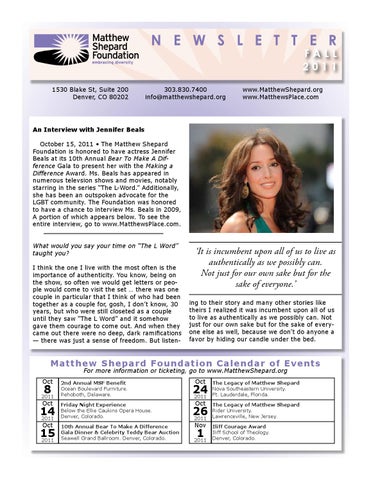 An Interview with Jennifer Beals October 15, 2011 • The Matthew Shepard Foundation is honored to have actress Jennifer Beals at its 10th Annual Bear To Make A Difference Gala to present her with the Making a Difference Award. Ms. Beals has appeared in numerous televsion shows and movies, notably starring in the series “The L-Word.” Additionally, she has been an outspoken advocate for the LGBT community. The Foundation was honored to have a chance to interview Ms. Beals in 2009, A portion of which appears below. To see the entire interview, go to www.MatthewsPlace.com. What would you say your time on “The L Word” taught you? I think the one I live with the most often is the importance of authenticity. You know, being on the show, so often we would get letters or people would come to visit the set … there was one couple in particular that I think of who had been together as a couple for, gosh, I don’t know, 30 years, but who were still closeted as a couple until they saw “The L Word” and it somehow gave them courage to come out. And when they came out there were no deep, dark ramifications — there was just a sense of freedom. But listen-

Matthew Shepard Foundation Newsletter • Fall 2011 How important would you say it is to include positive LGBT images in the entertainment industry? I think it’s incredibly important, but I think it’s just as important to tell the truth of the story. You know, I don’t think it’s helpful to anyone to, for example, say that every LGBT person is wonderful and perfect and without flaw. I think it’s much more helpful to tell the story as truthfully as you can, and with all of its complications, because that’s also when people recognize themselves, and that’s when people who are not part of the LGBT community will recognize themselves within that character. And then [they] hopefully empathize and maybe there’ll be some kind of shift. So I think it’s important to be positive, but I think it’s most important to be positively truthful. You have been such a strong ally in the fight for equality. Why do you think that allied voices are such an important component of that fight? Well I think everybody’s voice needs to be heard. I don’t think of my voice as being particularly special or unique, but … I have learned during the course of the show to speak up and to be heard and to be seen and to say what you think, and in a polite way – you don’t need to be rude. Which is the danger of the Internet with the way people throw around invectives; it can be a little harsh. I don’t think that kind of dialogue, well it’s not dialogue, needs to happen. I don’t think it’s very helpful, but I do think it’s really important to say what you think and to make sure that everybody is invited to speak at the table, you know, that everyone is included in the discussion. How can we ensure that all voices are heard? Well I think the most important thing first of all is to live as authentically as you can and that will come naturally. I think it flows from knowing who you are and embracing who you are and then it becomes a celebration of who you are, hopefully. It starts from the individual and then smaller communities are formed and then larger communities are formed, perhaps just in that one group. And then all of a sudden that reaches out to a larger extension to humanity, if you know what I mean. It’s important, I think, at a certain juncture to be informed about what’s going on. I mean there’s so many ways you can do it. Self-expression is obviously important, to

me anyway, you know, being able to tell your story, even if you just write it down for yourself. And then maybe you share it with one person, or several people, but you express yourself. And then there’s another realm of being informed politically. Which is incredibly complicated because the ground seems to shift constantly.

Matthew Shepard Foundation Newsletter • Fall 2011 Celebrating 10 years of “Bear To Make A Difference” As the Matthew Shepard Foundation celebrates its tenth annual Bear To Make A Difference Gala, we here at MSF are reminded of the incredible history of the event, and the people who have been indespensible to its success over the years. After Matthew’s murder, hundreds of teddy bears were created and donated in memory of Matthew, as well as other victims of senseless violence and hate. These bears were donated to the Dancing Bear Museum and Folk Center in Thermopolis, Wyoming for use in educating schoolchildren on diversity issues. They represent the international response to a hate crime that not only shook our nation, but also touched the hearts of people around the world. In February of 2002, a group of passionate individuals put together an idea for a silent auction of teddy bears that would benefit the Matthew Shepard Foundation. Many local Denver notables designed and dressed teddy bears and held a silent auction that raised just over five thousand dollars for the Matthew Shepard Foundation. In the years since, the event has become the largest annual fundraiser for the organization, with attendees from around the world. The event has grown to include many special autographed bears and other items from celeb-

rities, including Elton John, Drew Barrymore, Dolly Parton, Barbra Streisand, Jon Stewart, Barry Manilow, Liza Minnelli, Melissa Etheridge, Al &amp; Tipper Gore, and Bette Midler, to name just a few. But even with the support of notable people and celebrities, the Bear To Make A Difference Gala couldn’t have flourished these last ten years without our supporters. Year after year, a growing number of attendees not only support MSF with their donations and their bids on teddy bears, but also revitalize the organization with their energy and committment. Through good and hard times, that support has reminded us that we must continue the battle to erase hate; that we must always look to the future with acceptance, compassion, and understanding. Lastly, and certainly not least, Bear To Make A Difference could have never happened for all these years without our many volunteers, who have not only generously supported the event, but who were also the driving force behind its success. Their work – from the Dinner Committee to the volunteer event staff – ensures year after year that the dinner goes smotothly, auction items are secured, and everyone has a wonderful night. To them, we owe a debt of gratitude. It’s been an incredible ten years. Again, we thank all of you who have had a part in making the annual Bear To Make A Difference Gala such asuccess. n

For many years, productions of “The Laramie Project” in schools and communities across the country have been among the leading ways that new Foundation supporters learn about Matt, his legacy, and our continued work to Erase Hate. The play carries a powerful message about how a community reacts when a tragedy condemned by the world takes place in its midst. Not all the reactions, frankly, are uplifting. All are valuable in understanding the origins of hatred, the ways individuals react, and the inspirational examples of those who choose to change themselves and the world around them as a result of what happened. As you know, a few months ago we hired a veteran Wyoming journalist and theater professional to reach out and make sure these performances reach their utmost potential in spurring dialogue and educating the broader public. Since then, Susan Burk has exceeded our, and her, expectations in just how much the Foundation could help. As of October 3, Susan is already working with 24 productions coast to coast, has been to conduct talkbacks and lectures at two in the past week, and has five new

inquiries waiting for her when she returns to the office. Sometimes directors or cast members just want to know more about the people they will portray. Others seek advice on the setting of Laramie, the tone of past news coverage, or images of Matt and of the town. But usually, they seek above all else to ensure that the audience, the community, the media and the performers themselves provide a chance for a meaningful discussion about hatred, how it affects us, and what we can all do to recognize and address it in our lives.

‘Our Laramie Project Specialist is already working with 24 productions coast to coast.’ The truth is, none of us can really know how we or our neighbors would react if it were our town turned upside down by the international media seeking answers, by itinerant hate preachers forcing their message on our community; by oral historians and dramatists seeking the human story amidst our daily routines. The people of Laramie showed us one way that could go. Above all, our work is aimed at preventing any other town from having to show us another one. If you or someone you know is producing “The Laramie Project,” congratulations, and thanks. Please don’t hesitate to contact susan@ matthewshepard.org for more information on how to make it the success you are seeking. n