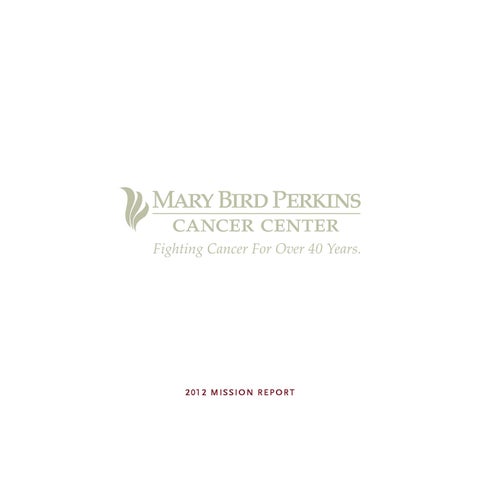 Vision We sha l l be the l e a ding c a n ce r ca r e o r g a n i z a t i o n i n L o ui s i a n a , recognized for the excellence of our treatment team, the strength of our partnerships, and our patient and community focused programs.

Remarkable L EA D ERS H I P “On behalf of the Mary Bird Perkins Board of Directors, I thank you for your support in helping save and improve the lives of so many in the communities Mary Bird Perkins has the privilege of serving. Our partnership played a pivotal role in the milestones reached in 2012 to advance quality cancer care across the region. For that, we are deeply grateful.” DONNA M. SAURAGE | Chair, Board of Directors

We all share a common bond â&amp;#x20AC;&amp;#x201C; to see the end of cancer. Whether viewed through the lens of a decade, year or even a single day, our bond is responsible for the innovative approaches that continuously add to the arsenal we deploy in the fight against cancer in Louisiana. This progress is worthy of celebration, but we cannot pause for one moment. Todayâ&amp;#x20AC;&amp;#x2122;s healthcare environment requires more inventive, resourceful and collaborative approaches for the treatment of cancer than ever before. In the pages of this report, you will see how the bonds with our community, staff and partners were further strengthened in 2012. What we all do together is making a difference. Our bond is changing cancer as we know it.

We are humbled to collaborate W IT H MANY E X PE R T P H Y S I CI A N S A N D OUT STANDING P ART NE RS. Across our 18-parish service region, we work together to provide the most advanced cancer care and services available. The physicians we work with have a devotion to patients that is unmatched. Teams of specialists give their all to patients, day in and day out. This includes medical oncologists, radiation oncologists, surgeons and many other disciplines with cancer expertise. As leaders in healthcare, our partners demonstrate an unwavering dedication to the fight against cancer. Whether they are helping to advance prevention and early detection or to provide the full spectrum of cancer care, they are committed to making it happen. Together, we are all working hand in hand to expand and integrate leading-edge cancer care in the communities we are so fortunate to serve.

Our Lady of the Lake Regional Medical Center

More than 40 years ago, the founders of Mary Bird Perkins Cancer Center saw the need for local access to quality cancer care, close to home. Today, physicians and staff at all five state-of-the-art Centers are extensions of that support, with a devotion to providing compassionate care to every person involved in the fight for life. Dedicated care teams ensure the patient experience is as seamless and comforting as possible, and patients are supported by experts using the most innovative technologies, treatments and clinical trials in the country. This highly personalized and comprehensive care is provided near family and friends, where real healing can happen.

prevention, education AND early detection. Mary Bird Perkins Cancer Center believes every person deserves access to these lifesaving healthcare services. Especially in our state, which consistently ranks high in the number of cancer deaths. This is not because there is more cancer in Louisiana – it’s largely because people are diagnosed too late. We decided to confront this challenge in 2002 when Mary Bird Perkins launched a comprehensive outreach program for the uninsured and under-insured populations to strategically build a culture of wellness. The program provides – at no cost to the participants – early detection services to find cancer early when better outcomes are more likely as well as educational opportunities for cancer prevention and smoking cessation classes so people can get healthy. Together with partners, we screened more than 6,000 people for breast, colorectal, oral, prostate and skin cancers in 2012 alone. Today, these efforts are nationally recognized as best practices in outreach and are making a positive difference in lives across southeast Louisiana.

ARE U NIQUE C OMP ONE NT S

Mary Bird Perkins Cancer Center made a significant impact on the healthcare of thousands of patients and their families in southeast Louisiana. This chart indicates how incoming funds were allocated to support the mission to improve survivorship and lessen the burden of cancer.

Assistance for under-resourced patients, such as transportation funding and provision of nutritional supplements

Rathbone Society Members Members of the Rathbone Society are Mary Bird Perkins Cancer Center’s most supportive donors, with annual gifts of $5,000 and above. The generosity of these donors makes it possible to provide vital

cancer resources across the full spectrum of care.

From Left: Richard and Susan Lipsey with Renee and Brett Furr at the 2012 Rathbone Society Dinner

“The permanence of a gift to the endowment is powerful. It is the most important long-term investment a donor can make. As the invested principal grows, so too does the annual income. Endowments, therefore, affect many more lives than would otherwise be touched by a donor’s generosity.” GAIL O’QUIN | Chair, Mary Bird Perkins Cancer Center Foundation

• Richard A. Lipsey and

• Heart of a Hero Fund

Anna B. Lipsey Legacy Builders is comprised of individuals who have made or notified Mary Bird Perkins Cancer Center Foundation (MBPCCF) of their intent to make planned gifts through their estate plans. Donors who have made outright gifts of $10,000 or more to the endowment or created endowed gifts for specific programs are also recognized as Anna B. Lipsey Legacy Builders. Through their generosity, the individuals listed on the next page are helping MBPCCF build a perpetual endowment fund in support of Mary Bird Perkins Cancer Center.

IS YOUR NAME MISSING? Despite our best efforts, errors and omissions sometimes occur. We sincerely apologize in advance if your name is missing. To access the full list of donors, please view this report and all other 2012 community reports at marybird.org. 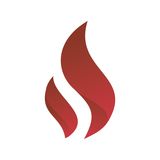