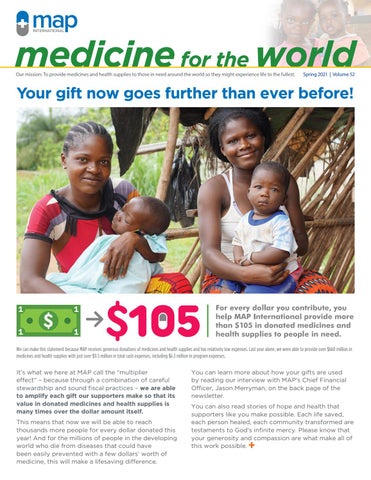 medicine for the world Our mission: To provide medicines and health supplies to those in need around the world so they might experience life to the fullest.

Your gift now goes further than ever before!

It’s what we here at MAP call the “multiplier effect” – because through a combination of careful stewardship and sound fiscal practices – we are able to amplify each gift our supporters make so that its value in donated medicines and health supplies is many times over the dollar amount itself. This means that now we will be able to reach thousands more people for every dollar donated this year! And for the millions of people in the developing world who die from diseases that could have been easily prevented with a few dollars’ worth of medicine, this will make a lifesaving difference.

You can learn more about how your gifts are used by reading our interview with MAP’s Chief Financial Officer, Jason Merryman, on the back page of the newsletter. You can also read stories of hope and health that supporters like you make possible. Each life saved, each person healed, each community transformed are testaments to God’s infinite mercy. Please know that your generosity and compassion are what make all of this work possible.

From fever and pain to hope and healing.

Parents struggle to find medicine for their daughters’ rare disease.

María Santos Sánchez Cabrera had been feverish and in pain for three days. The 44-year-old lives in San José, Honduras, and is a diabetic. She cannot afford the medications she needs to manage her diabetes, but even if she could, her local Ministry of Health clinic has none available.

For any parent whose child has been diagnosed with a rare disease, the diagnosis can feel overwhelming. But for the Jiménez family from Guatemala City, Guatemala, the challenges have been many.

Fortunately for Maria, Hope for a Healthier Humanity (HHH), a non-profit organization dedicated to helping vulnerable populations in Latin America, is invested in her community. Because her local clinic cannot supply her medications, María “depends on HHH and its donations from MAP International for her care,” says Dr. Healey-Sedutto, founder and Executive Director of HHH. When a recent HHH medical mission brigade visited the San José community, María was diagnosed with an acute urinary infection. The HHH mission team was delivering a shipment from MAP International and fortunately, Maria received antibiotics and pain relievers that she needed to heal. Because of the donated medicines, María is not only able to manage her chronic diabetes, but she was also able to receive the help she needed when she developed this acute infection. This is the outcome that MAP works for – to give every person the ability to access the health resources they need, so that they might experience life to the fullest. The smile on María’s face is proof that she is doing just that!

Julio and his wife Milvia struggled to find a doctor who could accurately diagnose their daughters’ troubling symptoms. As young children, Milvia (named after her mother) and Maria, were diagnosed with Myasthenia Gravis, a rare autoimmune disease that primarily causes muscle weakness and fatigue and for which there is no cure. The women were both prescribed a medicine called Mestinon, which helps them manage their symptoms, but it is a lifelong treatment, and it is costly. With the family’s limited income, it would be very difficult for them to afford the needed medication. God has provided mightily for the Jiménez family from the beginning, however. When Milvia and Maria were first diagnosed, a pharmaceutical company that manufactured Mestinon at the time approved the family to receive the medicine for free.

Milvia, Julio and and their daughter Maria

After several years, the company could no longer continue their assistance, and referred the family to MAP International. “There are no words to express our gratitude and the importance of MAP in our lives. Because of our financial situation it would be impossible to maintain our daughters’ treatments,” says Julio. “God bless MAP and the people that make it possible for people like us to have access to medicines for our daughters.”

After nearly losing her life during pregnancy, a mother finds help. As one of the poorest countries in the western hemisphere, it is no surprise that Haiti also has one of the highest maternal mortality rates. According to the World Health Organization, 76 percent of births in Haiti occur without medical attention.

Jean Silamene, who lives in Morne Chandelle, Haiti, knows these facts all too well. She has never seen a doctor, and nearly lost her life while giving birth to her eighth child at home. She is now pregnant with her ninth child, and since that close call during her last delivery, she is determined to seek medical care to avoid any complications with the development or delivery of this child. Fortunately for Jean, she was able to attend a mobile clinic organized by a doctor in her area. She was seen by Dr. Opedan, who had just received a supply of prenatal vitamins through Food For The Poor’s partnership with MAP International. He was able to provide prenatal vitamins for Jean, who would have had no access to this resource otherwise.

In fact, Dr. Opedan saw a total of 32 pregnant women at that mobile clinic and was able to provide free prenatal vitamins to all of them, thanks to MAP. “This is important to him because he knows this will ensure that the new mothers are getting the vitamins and minerals needed to lower their risk of pregnancy complications,” an in-country partner representative said to Food For The Poor. Because of MAP supporters, these Haitian women can have confidence that their babies are receiving all the nutrients they need to develop well.

Saving lives in rural Liberia. Jon Rossman was visiting Liberia to support the ongoing work of Gbarnga Mission (the ministry of which he serves as President and CEO), when he fell ill with both malaria and pneumonia. The closest medical attention available was a small clinic 25 minutes away. While he was being treated, Jon learned of the needs of the clinic and the people it serves. At the clinic, Jon was treated by a physician’s assistant (PA) who the locals call “Dr. Steve.” Dr. Steve told Jon that due to the poor economic condition in Liberia and lack of private donor or government funding, the clinic has very few supplies and struggles to stay open, as most people can’t afford to pay for services. Fortunately, Jon and his mission team had brought several Medical Mission Packs along with them from MAP International, and they were able to leave two of the mission packs to help sustain the clinic. “Dr. Steve was ecstatic when he received two of the Medical Mission Packs that we brought because he knew the clinic could continue providing basic free medical care with the support of the supplies in these packs,” Jon said. The Gbarnga Mission also runs a Christian school outside the city of Gbarnga, and the students at the school frequently suffer from illnesses ranging from fullblown malaria to mild headaches. Jon says that “parents

often decide between food or medicine that may cost more than a full day’s wages” so many instead attempt “country medicine” using local plants or “traditional healing” from a self-proclaimed healer. Jon was able to leave another of MAP’s Medical Mission Packs with the school, and within the first day of receiving it, Jon said that “an elementary school student presented with a fever and was given acetaminophen from the pack – a medicine his family could not have afforded” without the help of MAP supporters.

As MAP’s Chief Financial Officer, Jason Merryman’s guiding principles are to ensure the organization’s fiscal accountability and careful stewardship of the gifts and resources that are entrusted to MAP’s care. Prior to joining MAP in 2016, he worked at a pharmaceutical company that prepared him well for his future role. But he credits God with leading him to his current position at MAP. “I really felt God leading me to do something with more of a purpose behind it in my day-to-day work,” he recounts. By maximizing efficiencies and ensuring that every dollar goes as far as possible, MAP has increased its “multiplier effect” for the fourth year in a row. This “multiplier” concept describes how one dollar donated to MAP is leveraged to provide many more dollars’ worth of medicines and health supplies for someone in need.

include a statement in all our communications that explains a little bit about the formula we use. Basically, we take our net GIK distributed (the value of everything we distributed throughout the year), and then we divide that by our program expense.”

“This figure incorporates the partnerships we have with our Gift In Kind donors such as pharmaceutical companies to really make sure we are able to maximize the value of the donations of medicines and health supplies that we take in before they go out the door.

Jason is driven by faith both in his life and in his work at MAP. “Working at an organization where you can pray before meetings and just being able to live out your faith through what you do day to day is a big thing for me as well.”

As our audited financial statements come out, we update the multiplier. The multiplier has gone up every year for the last four years. One thing we try to do is make sure it’s very clear how we derive those numbers and clarify for our supporters. That’s why we

When asked what he would say to supporters about their role and impact on MAP’s work, Jason replied, “Everything matters. Whether it’s a dollar, or whether it’s $20, or $100 – everything matters because it’s finding its way to help people in need.”

Today, your gifts to MAP are going further than ever before. In our Spring 2021 Newsletter, we shared some incredible stories of hope and health that your compassion and generosity helped make possible. We hope you’ve been inspired by what you read. Please know that a gift of any amount will continue to help get critically needed medicines and health supplies to those who need them most around the world.