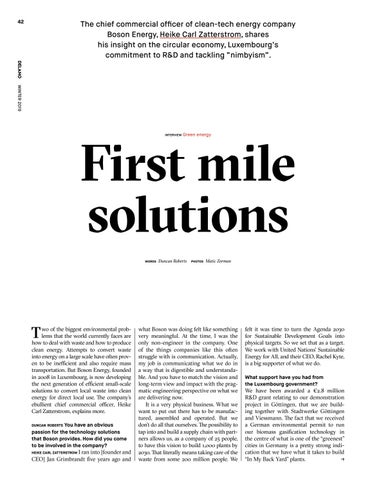 wo of the biggest environmental problems that the world currently faces are how to deal with waste and how to produce clean energy. Attempts to convert waste into energy on a large scale have often proven to be inefficient and also require mass transportation. But Boson ­Energy, founded in 2008 in Luxembourg, is now developing the next generation of efficient small-scale solutions to convert local waste into clean energy for direct local use. The company’s ebullient chief commercial officer, Heike Carl Zatterstrom, explains more. You have an obvious passion for the technology solutions that Boson provides. How did you come to be involved in the company?

what Boson was doing felt like something very meaningful. At the time, I was the only non-engineer in the company. One of the things companies like this often struggle with is communication. Actually, my job is communicating what we do in a way that is digestible and understandable. And you have to match the vision and long-term view and impact with the pragmatic engineering perspective on what we are delivering now. It is a very physical business. What we want to put out there has to be manufactured, assembled and operated. But we don’t do all that ourselves. The possibility to tap into and build a supply chain with partners allows us, as a company of 25 people, to have this vision to build 1,000 plants by 2030. That literally means taking care of the waste from some 200 million people. We

felt it was time to turn the Agenda 2030 for Sustainable Development Goals into physical targets. So we set that as a target. We work with United Nations’ Sustainable Energy for All, and their CEO, Rachel Kyte, is a big supporter of what we do. What support have you had from the Luxembourg government?

We have been awarded a €2.8 million R&D grant relating to our demonstration project in Göttingen, that we are building together with Stadtwerke Göttingen and Viessmann. The fact that we received a German environmental permit to run our biomass gasification technology in the centre of what is one of the “greenest” cities in Germany is a pretty strong indication that we have what it takes to build → “In My Back Yard” plants.