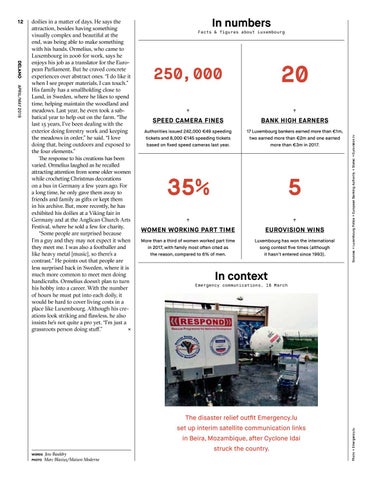 two earned more than €2m and one earned

More than a third of women worked part time

Luxembourg has won the international

in 2017, with family most often cited as

the reason, compared to 6% of men.

doilies in a matter of days. He says the attraction, besides having something visually complex and beautiful at the end, was being able to make something with his hands. Ormelius, who came to Luxembourg in 2006 for work, says he enjoys his job as a translator for the European Parliament. But he craved concrete experiences over abstract ones. “I do like it when I see proper materials, I can touch.” His family has a smallholding close to Lund, in Sweden, where he likes to spend time, helping maintain the woodland and meadows. Last year, he even took a sabbatical year to help out on the farm. “The last 15 years, I’ve been dealing with the exterior doing forestry work and keeping the meadows in order,” he said. “I love doing that, being outdoors and exposed to the four elements.” The response to his creations has been varied. Ormelius laughed as he recalled attracting attention from some older women while crocheting Christmas decorations on a bus in Germany a few years ago. For a long time, he only gave them away to friends and family as gifts or kept them in his archive. But, more recently, he has exhibited his doilies at a Viking fair in Germany and at the Anglican Church Arts Festival, where he sold a few for charity. “Some people are surprised because I’m a guy and they may not expect it when they meet me. I was also a footballer and like heavy metal [music], so there’s a contrast.” He points out that people are less surprised back in Sweden, where it is much more common to meet men doing handicrafts. Ormelius doesn’t plan to turn his hobby into a career. With the number of hours he must put into each doily, it would be hard to cover living costs in a place like Luxembourg. Although his creations look striking and flawless, he also insists he’s not quite a pro yet. “I’m just a × grassroots person doing stuff.” 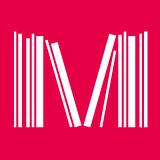