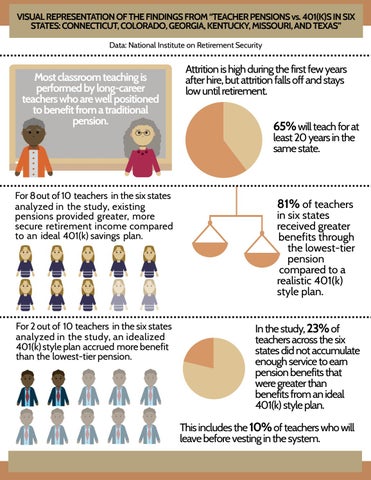 Most classroom teaching is performed by long-career teachers who are well positioned to benefit from a traditional pension.

Attrition is high during the first few years after hire, but attrition falls off and stays low until retirement.

For 8out of 10 teachers in the six states analyzed in the study, existing pensions provided greater, more secure retirement income compared to an ideal 401(k) savings plan.

For 2 out of 10 teachers in the six states analyzed in the study, an idealized 401(k) style plan accrued more benefit than the lowest-tier pension.

It would cost significantly more to fund 401(k) benefits that match the value of the pension currently earned by the typical teacher in each of the six states. Providing the same level of retirement income to a full-career teacher through a 401(k) account would cost roughly 50% more (sometimes even as much as 60% more) than a Defined Benefit (DB) pension.

A pooled pension is more efficient than individual investment accounts when it comes to financing a large retirement system.

For the most part, Colorado state employees and Colorado teachers benefit more from pensions than 401(K)s. State Employee

Despite their differences, 81% are better off with a pension.

What does this mean? Pensions have a great retention effect on teachers, thus lowering teacher turnover. Be cautious of switching. Switching benefit structures could significantly reduce retirement income and affect long-term teachers (who conduct the most classroom teaching). Although switching plans may seem beneficial now, the resulting decreased retirement income may have a negative effect on consumer spending down the road. 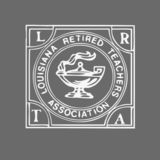