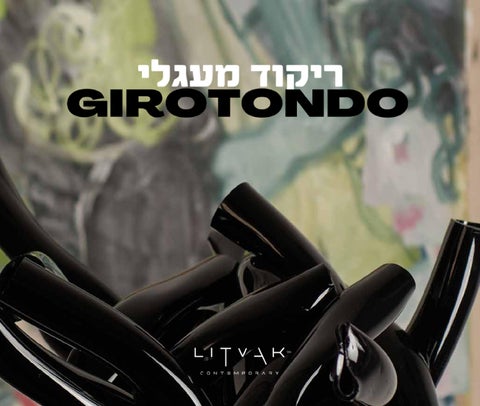 Girotondo: Round Dance May 2022 Hadas Glazer Girotondo in Italian means round dance, the type of popular folk dance common among many societies and cultures, each with its typical style, based on the perfect circle. Round dances express a desire for a complete and harmonic arrangement of a group of people, representing thereby the yearning for a non-hierarchical equal society. The exhibition title comes from Michele Bubacco’s monumental work, shown here for the first time. The exhibition’s central ideas and concepts originate in the world of dance: movement, rest, rotation, and troupe. These ideas merge and reflect in the paintings and glass sculptures and indicate the relations between movement and creation – two expressive forms. Some of the works represent movement and figures uniting, others pay attention to pauses and gaps between bodies. Pina Bausch, a leading figure in modern dance, created works inspired by visual art. Bausch redefined the ties between art, life and dance, with human relations at the center: the difficulties and traumas they involve and the gentleness and compassion they bring to human life. Her works paved the way for unbridled dance in which the boundaries between madness and synchronization are constantly transgressed, just as in neoexpressionist art. The works in the exhibition are informed by the

history of art and dance and are enmeshed in an intricate dialogue in which contradictory values coexist – physical enjoyment and spiritual elevation, unruliness and sophistication, attraction to another and fear of intimacy and attachment. Another link between dance and the artworks on display is the relation of movement and sight. “The artist changes the world into paintings. To understand [this] we must go back to the working, actual body—not the body as a chunk of space or a bundle of functions but that body which is an intertwining of vision and movement” – wrote Maurice Merleau-Ponty. 1His essay “The Primacy of Perception” enumerates on the connection between what the eyes receive from the external world and the seer’s internal and spiritual interpretation. According to the French philosopher, the eye traces the space of life and therefore movement in space is the natural continuation of seeing. Dance stretches the limits of the body, while plastic art, created through the artist’s bodily movements, stretches the limits of matter. Approaching the limits of the body or the material manifests the connection between physical object and spiritual existence.

As the works of the exhibition show, the physical bodies of artists have a vital role in instilling spirit into the material. Ofer Lellouch transforms his spiritual experience into painting; Michele Bubacco produces a performance-like painting using a dishwashing sponge, thereby imprinting the markings of his body into his painting; Sara Benninga’s series of paintings hangs in a row in the studio, conjuring the sense of a dance consisting of movement and pauses; Julius Weiland sculpts in industrial glass which he melts at high temperature, forcing him to act fast before the glass cools and sets; in Sphere, the glass egg created by Vaclav Cigler, the perfect geometric shape marks the search for a clear and pure aesthetic essence.

Michele Bubacco’s work Girotondo is one of a series of four works created in the gallery space in 2012. The work merges a meticulously planned composition based on many sketches with an experimental conception of painting. Bubacco used white paint to outline his drawing on the untreated linen before painting on it with a dishwashing sponge. This act created soft undefined lines that were naturally free flowing according to the amount of pressure he applied to the sponge. This way of painting allowed him to add color with a single movement and to remove it with another, thereby creating the tactility of the canvas and the strong bodily feel emanating from it.

ostensibly about dancing in a circle, but also containing apocalyptic meanings. This is the moment Bubacco seeks to capture here – the dance, as well as the collapse. Bubacco based the painting on drawings he created in his everyday life both in the studio and outside, to understand human movement in space and to create a language from these movements. The artist questions the relation between the figures and the possibility of self-definition through contact with the other. The figures stand in a crowded formation as if on stage, in a way that can be read as a composition in an intensive dance or a moment of horror and fear.

Bubacco’s work corresponds broadly with art history. He refers to 16th century Venetian paintings, such as Tintoretto’s panoramic painting The Probatic Pool with its wealth of theological connotations, and to types of modernist abstraction in works by Cy Twombly and Christopher Wall. The work’s title is taken from an innocuous children’s song,

The work Ballerina, which hangs next to Girotondo, shows a single dancer split into several identities ranging between the genuine and the spectral, the concrete and the intangible. Bubacco uses the deconstruction of the figure to examine the dancer’s internal relations and her relationship with the viewer. Her figure is not the subject for studying the beauty of her body or movements, but of expressing a mental state precisely when her body is still.

In Ofer Lellouch’s Nudes (From the Studio of Cesar) Pregnant women fill the darkness of the canvas. Lax and flowing, these enigmatic figures are at once evident and indistinct, fragmented and gloomy yet also full of life and vigor. The mysterious image of the women arose from an unexpected visit by Lellouch to Cesar’s atelier at the Ecole de BeauxArts in Paris, a visit which occurred during the Gulf War. In the empty studio, where Cesar, his teacher, used to teach, Lellouch encountered semi-sculpted lumps, resembling the shape of female bodies. Paris, the Beaux-Arts, the atelier and the raw masses of clay evoked a powerful spiritual moment, heightened further by its contrast with the war in Israel at the same time. After his return, Lellouch began working on a series of monumental paintings inspired by what he had felt. The initial subject of the series was Cesar’s atelier and the blocks of clay, yet the atelier gradually disappeared, and the raw material became pregnant-female figures emerging from the dark. The work, born from an internal friction, provoked opposing readings and interpretations. In the Tel Aviv University Art Gallery exhibition catalogue, the curator Mordechai Omer wrote about the sense of death that surrounds the painting: “Fragmented body parts, crude masses of matter and an almost desperate attempt to breathe life into them, started appearing on his canvasses. The nudes arranged themselves in rows, as though getting ready for some death procession or protest march.” 1 Conversely, the theoretician Maithe Valles-Bled saw the life force secreted in the work.

Ofer Lellouche, Nudes (From the Studio of Cesar), 1992, Acrylic on canvas.

According to her, inside the duplicated figure Lellouch marked the divinity of the creation: “Without doubt, in the multiplied image that he lets us see of himself or of the female nudes, Lellouche, developing in an exaggerated manner the attributes linked to the symbol of birth and creation – stretching, as we have seen, the right arm and hand, swelling the male and female bellies that signify the archaic divinities of mother earth – accords the mirror effect the same status of being a revealer of the creating power as myth.” 2 Sara Benninga’s paintings examine the border separating enjoyment and vice. The paintings depict dancing figures attempting to be liberated from their concrete state. The paintings were created as a development of Benninga’s

series Bacchanalia, which deals with people’s joy and the places where it transgresses into undefined wildness. As in Bacchanalia the paintings in the exhibition also question the origin of pleasure and the definition of sin in human cultures. The figures are immersed in a dance that lacks a constant rhythm. They desire an ecstatic, even meditative experience that expands and transcends their bodily existence. In contrast to the bold, wild corporality are paintings of moments of rest and pause, in which the figures detach from their internal sensations and gaze outward. The paintings hint at the figures’ moods – their sense of emptiness and their connection or detachment from their surroundings. The figures are as separate as they are merged. The encounter with the surroundings or with others, which is naturally a meeting of exhilaration and expectations, allows forming new reciprocal relations.

The paintings themselves are the result of enjoyment. The practice of painting is itself a dance of sorts, in which

Benninga moves among the works adding elements of figures as she goes along. Reading each painting is a consequence of the encounter with the viewers’ gaze, with their outlook and with the surrounding paintings.

Two works by the Czech artist Vàclav Cigler displayed in the exhibition expresses artistic and phenomenological notions. Cigler uses perfect, minimalistic geometric shapes to achieve harmony and to understand how the meeting of light and material creates an experience of pure, transcendent truth. Although his works are completely abstract and lack decorative or narrative elements, they are full of metaphoric meaning. The sculpture Sphere represents perfection, elevation, universality and wealth through the transparency of its material and the passage of light through it. The red glass egg is a condensation of sorts of the life force erupting from within it, and its two halves change from transparency to obscureness. The

graphite drawing, Drawing 2, represents some kind of energetic sphere that moves from the center to the edges. The drawing and the sculpture correspond with the works around them to create a sense of energetic force that diffuses from a powerful core sending waves to the other parts of the exhibition.

and separate, their edges seem broken and sharp yet are in fact polished. Weiland seeks a balance between the material’s fluidity and limpness and the stability and growth of the details, which is made possible through their mutual reliance.

“The narrative of the work alters Minimalism’s course from empirical absoluteness, from the lawful binding of meanings to the transcendent model embodied in illumination rising from the glass and its metaphor of earthly release” . 3 Julius Weiland’s sculptures are made from industrial glass tubes, pipes and straws. Weiland cuts, shapes and joins these objects by welding them at high temperature. The heat deforms the upright shape of the glass cones, an act of morphing that highlights their incongruous nature – industrial and uniform, and fragile and unique. The glass sculptor creates his works with great heat and speed anticipating the moment the glass will cool and acquire its ixed shape. The elements in Weiland’s sculptures merge

Together they create rounded, wavy movements, rushing and crashing like a shoal of fish or a troupe of dancers on stage. The light shining on the sculptures gives them additional vitality and the light they reflect emphasizes their illusive materiality. The sculptures also have a camouflaging quality which gives their delicate materiality the guise of steel or plastic.

Girotondo in Italian means round dance, the type of popular folk dance common among many societies and cultures, each with its typical style, based on the perfect circle. Round dances express a desire for a complete and harmonic arrangement of a group of people, representing thereby the yearning for a non-hierarchical equal society. The exhibition title comes from Michele Bubacco’s monumental work, shown here for the first time. 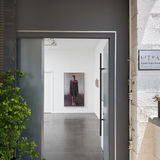 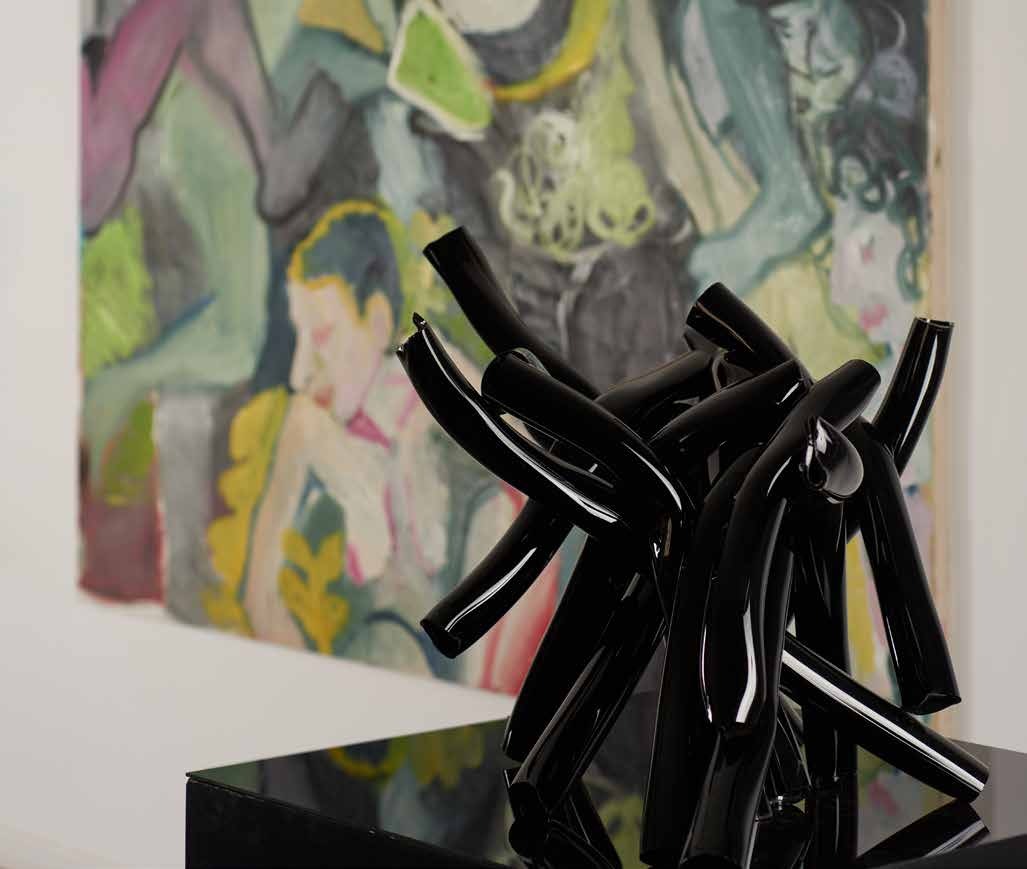