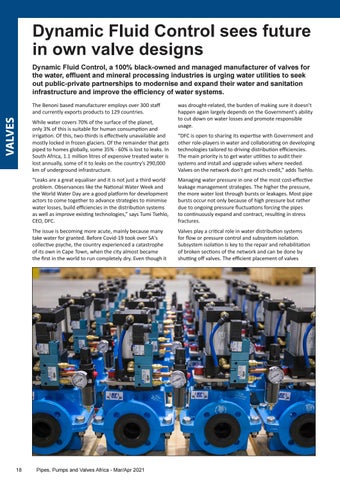 Dynamic Fluid Control sees future in own valve designs Dynamic Fluid Control, a 100% black-owned and managed manufacturer of valves for the water, effluent and mineral processing industries is urging water utilities to seek out public-private partnerships to modernise and expand their water and sanitation infrastructure and improve the efficiency of water systems.

The Benoni based manufacturer employs over 300 staff and currently exports products to 129 countries.

While water covers 70% of the surface of the planet, only 3% of this is suitable for human consumption and irrigation. Of this, two-thirds is effectively unavailable and mostly locked in frozen glaciers. Of the remainder that gets piped to homes globally, some 35% - 60% is lost to leaks. In South Africa, 1.1 million litres of expensive treated water is lost annually, some of it to leaks on the country’s 290,000 km of underground infrastructure.

was drought-related, the burden of making sure it doesn't happen again largely depends on the Government's ability to cut down on water losses and promote responsible usage. “DFC is open to sharing its expertise with Government and other role-players in water and collaborating on developing technologies tailored to driving distribution efficiencies. The main priority is to get water utilities to audit their systems and install and upgrade valves where needed. Valves on the network don’t get much credit,” adds Tsehlo.

“Leaks are a great equaliser and it is not just a third world problem. Observances like the National Water Week and the World Water Day are a good platform for development actors to come together to advance strategies to minimise water losses, build efficiencies in the distribution systems as well as improve existing technologies,” says Tumi Tsehlo, CEO, DFC.

Managing water pressure in one of the most cost-effective leakage management strategies. The higher the pressure, the more water lost through bursts or leakages. Most pipe bursts occur not only because of high pressure but rather due to ongoing pressure fluctuations forcing the pipes to continuously expand and contract, resulting in stress fractures.

The issue is becoming more acute, mainly because many take water for granted. Before Covid-19 took over SA's collective psyche, the country experienced a catastrophe of its own in Cape Town, when the city almost became the first in the world to run completely dry. Even though it

Valves play a critical role in water distribution systems for flow or pressure control and subsystem isolation. Subsystem isolation is key to the repair and rehabilitation of broken sections of the network and can be done by shutting off valves. The efficient placement of valves