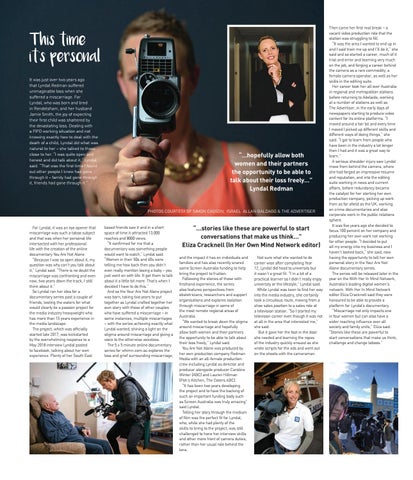 This time it’s personal It was just over two years ago that Lyndal Redman suffered unimaginable loss when she suffered a miscarriage. For Lyndal, who was born and bred in Rendelsham, and her husband Jamie Smith, the joy of expecting their first child was shattered by the devastating loss. Dealing with a FIFO working situation and not knowing exactly how to deal with the death of a child, Lyndal did what was natural to her – she talked to those close to her. “I was quite open and honest and did talk about it,” Lyndal said. “That was the first time I found out other people I knew had gone through it – family had gone through it, friends had gone through it.”

For Lyndal, it was an eye opener that miscarriage was such a taboo subject and that was when her personal life intersected with her professional life with the creation of the online documentary You Are Not Alone. “Because I was so open about it, my question was why can’t you talk about it,” Lyndal said. “There is no doubt the miscarriage was confronting and even now, two years down the track, I still think about it.” So Lyndal ran her idea for a documentary series past a couple of friends, testing the waters for what would clearly be a passion project for the media industry heavyweight who has more than 15 years experience in the media landscape. The project, which was officially started late 2017, was kickstarted by the overwhelming response to a May 2018 interview Lyndal posted to facebook, talking about her own experience. Plenty of her South East

based friends saw it and in a short space of time it attracted 13,000 reaches and 8000 views. “It confirmed for me that a documentary was something people would want to watch,” Lyndal said. “Women in their 50s and 60s were telling me how back then you didn’t even really mention losing a baby – you just went on with life. It got them to talk about it a little bit more. That’s when I decided I have to do this.” And so the Your Are Not Alone project was born, taking two years to put together as Lyndal crafted together her own story with those of other couples who have suffered a miscarriage – in some instances, multiple miscarriages – with the series achieving exactly what Lyndal wanted, shining a light on the stigma around miscarriage and giving a voice to the otherwise voiceless. The 5 x 5 minute online documentary series for whimn.com.au explores the loss and grief surrounding miscarriage,

“…stories like these are powerful to start conversations that make us think…” Eliza Cracknell (In Her Own Mind Network editor) and the impact it has on individuals and families and has also recently snared some Screen Australia funding to help bring the project to fruition. Following the stories of those with firsthand experience, the series also features perspectives from obstetricians, researchers and support organisations and explores isolation through miscarriage in some of the most remote regional areas of Australia. “We wanted to break down the stigma around miscarriage and hopefully allow both women and their partners the opportunity to be able to talk about their loss freely,” Lyndal said. You Are Not Alone was produced by her own production company Redman Media with an all-female production crew including Lyndal as director and producer alongside producer Caroline Winter (ABC) and Lauren Hillman (Poh’s Kitchen, The Daters ABC). “It has been two years developing the project and to have the backing of such an important funding body such as Screen Australia was truly amazing” said Lyndal. Telling her story through the medium of film was the perfect fit for Lyndal, who, while she had plenty of the skills to bring to the project, was still challenged to hone her interview skills and other more front of camera duties, rather than her usual role behind the lens.

Not sure what she wanted to do career wise after completing Year 12, Lyndal did head to university but it wasn’t a great fit. “I’m a bit of a practical learner so I didn’t really enjoy university or the lifestyle,” Lyndal said. While Lyndal was keen to find her way into the media industry, she certainly took a circuitous route, moving from a shoe sales position to a sales role at a television station. “So I started my television career even though it was not at all in the area that interested me,” she said. But it gave her the foot in the door she needed and learning the ropes of the industry quickly ensued as she wrote scripts for the ads and went out on the shoots with the cameraman.

Then came her first real break – a vacant video production role that the station was struggling to fill. “It was the area I wanted to end up in and I said train me up and I’ll do it,” she said and so started a career, much of it trial and error and learning very much on the job, and forging a career behind the camera as a rare commodity, a female camera operator, as well as her skills in the editing suite. Her career took her all over Australia in regional and metropolitan stations before returning to Adelaide, working at a number of stations as well as The Advertiser, in the early days of newspapers starting to produce video content for its online platforms. “I moved around a fair bit and every time I moved I picked up different skills and different ways of doing things,” she said. “I got to learn from people who have been in the industry a lot longer then I had and it was a great way to learn.” A serious shoulder injury saw Lyndal move from behind the camera, where she had forged an impressive resume and reputation, and into the editing suite working in news and current affairs, before redundancy became the catalyst for her starting her own production company, picking up work from as far afield as the UK, working on crime documentaries and also corporate work in the public relations sphere. It was five years ago she decided to focus 100 percent on her company and producing her own work not working for other people. “I decided to put all my energy into my business and I haven’t looked back,” she said, now having the opportunity to tell her own personal story in the Your Are Not Alone documentary series. The series will be released later in the year on the With Her In Mind Network, Australia’s leading digital women’s network. With Her In Mind Network editor Eliza Cracknell said they were honoured to be able to provide a platform for Lyndal’s documentary. “Miscarriage not only impacts one in four women but can also have a wider reaching influence over all society and family units,” Eliza said. “Stories like these are powerful to start conversations that make us think, challenge and change taboos.” 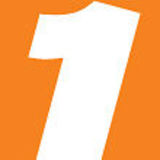