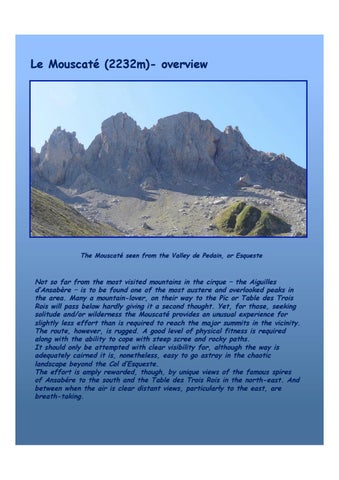 Not so far from the most visited mountains in the cirque – the Aiguilles d’Ansabère – is to be found one of the most austere and overlooked peaks in the area. Many a mountain-lover, on their way to the Pic or Table des Trois Rois will pass below hardly giving it a second thought. Yet, for those, seeking solitude and/or wilderness the Mouscaté provides an unusual experience for slightly less effort than is required to reach the major summits in the vicinity. The route, however, is rugged. A good level of physical fitness is required along with the ability to cope with steep scree and rocky paths. It should only be attempted with clear visibility for, although the way is adequately cairned it is, nonetheless, easy to go astray in the chaotic landscape beyond the Col d’Esqueste. The effort is amply rewarded, though, by unique views of the famous spires of Ansabére to the south and the Table des Trois Rois in the north-east. And between when the air is clear distant views, particularly to the east, are breath-taking.

Good mountain path to the ﬁrst plateau. Poor, but easy to follow path to the scree above the Cabane de Pedain. Awkward and someEmes steep scree to the Col d’Esqueste. Poor, someEmes unclear path to the summit (cairned).

From the car park at Pont Lamary follow directions to the Col d’Esqueste given in the walk called “La Pic des Trois Rois and La Table via Col d’Esqueste” (Walks 2 on the website). Please note, however, that it is no longer necessary to enter the woods after the abandoned cabane on the first Plateau. Head directly NW through the grassy area, keeping the forest on your right, until coming to a path that picks its its way up a grassy slope before entering woods badly damaged by snow avalanches. Waypoint 1 (30T 684960E 475380N; alt. 2114m) – The Col d’Esqueste.

•  Waypoint 1 (30T 684960E 4753815N; alt. 2114m) – The Col d’Esqueste. Before this point the path will have led through what some might see as a false col. When the true col is reached, however, the brown cliffs on the Spanish side of the frontier suddenly come into view straight ahead. The main path leading to the Trois Rois continues on from the the Col d'Esqueste but, for the Muscaté, a less obvious way leads off to the left (SW) in order to pass around rocky outcrop (cairns). Within minutes the large buttock-shaped dome, referred to in the ascension of the Trois Rois, comes into view. More cairns lead across broken ground to a minor col on its left hand side. In fact, it’s all rough ground from here on.

Walkers picking their way up to Waypoint 2 to the left of the buttock-shaped dome.

•  Waypoint 2 (30T 684787E 4753600N; alt. 2165m) - The minor col to the left of the buttock-shaped rock. From here descend following the cairns and bypass a large limestone outcrop on its right hand side. More cairns lead to a little stone gateway beyond which lies the summit slope which is climbed easily to the top. (Be careful to make mental notes on the way up or, maybe, take a few photos as there a a number of false paths and unhelpful cairns that must be avoided on the way back.)

The stone gateway and summit slope beyond.

A from the summit view towards Ansabère.