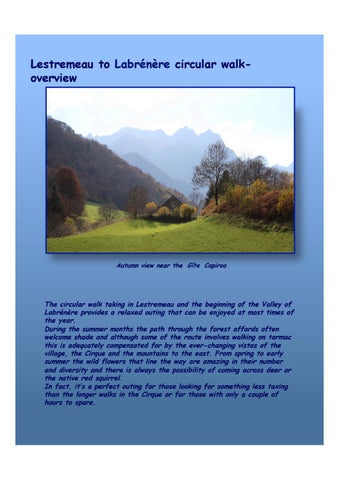 Autumn view near the Gîte Capiroo

The circular walk taking in Lestremeau and the beginning of the Valley of Labrénère provides a relaxed outing that can be enjoyed at most times of the year. During the summer months the path through the forest affords often welcome shade and although some of the route involves walking on tarmac this is adequately compensated for by the ever-changing vistas of the village, the Cirque and the mountains to the east. From spring to early summer the wild flowers that line the way are amazing in their number and diversity and there is always the possibility of coming across deer or the native red squirrel. In fact, it’s a perfect outing for those looking for something less taxing than the longer walks in the Cirque or for those with only a couple of hours to spare.

At the crossroads below the campsite go straight over as though going to Labrenère. Park at the ﬁrst junc=on by the ﬁre hydrant next to a concrete pylon. (There is a sign to Capiroo on the concrete pylon.)

All seasons apart from when there is deep snow.

(It is also possible to do the walk from the village by following the GR10 to the point where it joins the lane to Capiroo. This will add another 90 minutes to the timing.)

1: Follow the lane towards Gîte Capiroo as indicated by the sign on the pylon. Pass the point where the GR10 joins from below and after roughly ten minutes, just before a gateway, leave the tarmac to follow the path forking off to the left. Follow the white and red GR10 markers to a group of houses, the first of which is the gîte. Pass this and go between the two further buildings before descending a little to a bridge over the river Labrenère. Continue uphill for approximately 25m to a yellow signpost indicating the way to the Col de Pau and the Plateau de Labrenère. It is here that the the route leaves the GR10 which continues on to the Plateau de Lhers. 2: Follow the path which runs along the lower edge of the forest. In winter and early spring, with bare tree, there are magnificent views of the western Cirque. In summer, however, the same views appear as sudden surprises through leaf-framed windows. After about 15 minutes in the forest another path leads off down to the right. Ignore this and continue on the higher one which is marked by a short post bearing a green and yellow flash. The route which rises gently becomes steeper, climbing for a further ten minutes to its highpoint at 1135m of altitude. A wooden signpost marks the spot. 3: From this point, the way forward requires no more significant climbing and any doubts about the way forward that might be caused by minor paths branching off are quickly dispelled by further waymarks. Five minutes on from the high point, go through a large metal gate and pick your way across a muddy stream before continuing more easily on, what is now, a track rather than a path. This leads, about 90 minutes after leaving the car, to the Plateau de Labrenère. Here, descend to the stream which can be crossed by some easy boulder hopping but if you are not feeling that confident, or the water level is too high, continue upstream to the concrete bridge. Once on the far bank go right to the car park protected by cattle grids. 4: From the car park take the track in the direction of Lescun.

After few minutes on the track it transforms, once again, into tarmac. Ignore the turning on the left which leads up into the Vallée d’Annès. (See walk to Bricoutou) It is a quiet lane with no navigational issues and plenty to look at in the mountainous distance but also close by in the fields, verges, and sky where birds such as kites and vultures are common. It’s a gentle and absorbing end to the excursion so that the 30 minutes back to the car pass hardly noticed.

Preparing to boulder hop over the stream!