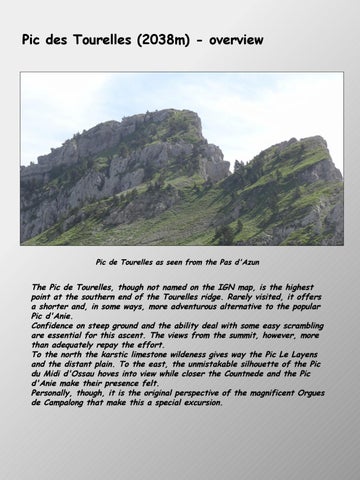 Pic de Tourelles as seen from the Pas d'Azun

The Pic de Tourelles, though not named on the IGN map, is the highest point at the southern end of the Tourelles ridge. Rarely visited, it offers a shorter and, in some ways, more adventurous alternative to the popular Pic d'Anie. Confidence on steep ground and the ability deal with some easy scrambling are essential for this ascent. The views from the summit, however, more than adequately repay the effort. To the north the karstic limestone wildeness gives way the Pic Le Layens and the distant plain. To the east, the unmistakable silhouette of the Pic du Midi d'Ossau hoves into view while closer the Countnede and the Pic d'Anie make their presence felt. Personally, though, it is the original perspective of the magnificent Orgues de Campalong that make this a special excursion.

Parking at the Refuge de l'Aberouat

Good paths to the Pas d'Azun then rough paths on scree and steep vegetated slopes. One short passage of easyscrambling on mediocre rock

From the Refuge de l'Aberouat the route follows the GR 10 (marked by red and white flashes) in the direction of the Pic d'Anie (west then nort-west). After traversing the forest, Cabane du Cap de la Baitch is reached roughly 1h 25mins after setting off. Waypoint 1: Cap de Baitch (alt. 1689) From here, continue uphill, still on the GR 10, to the Pas d'Azun reached after a further 25 minutes or so.

Waypoint 2: The Pas d'Azun alt. 1873m. Pass through the col and, looking right (approximately east) the objective of the walk becomes clearly visible. Pick up the path leading off in the direction of the summit and follow it as it stays fairly close to the cliff edge. Pass to the right a group of pine trees to a point where it is possible to look down from the lip of the precipice. The way then swings off to the left into an open area of mainly scree in order to avoid the steep rocks directly above. The occasional cairn directs the walker right again towards the cliff edge over steep ground that becomes more vegetated. Soon after the path is forced back right, squeezing between some large rocks before arriving at the rcoky step.

Rock formations at the cliff edge.

Waypoint 3: The rocky step alt. 1948m. Climb up over the step, taking care to verify holds in the upper part. Then carefully follow the narrow vegetated path right back toward the precipice. From here the way rises steeply, but without further difficulties to the first of two twin peaks.

Loking east along the Orgues from the first summit

An adventurous walk above the Pas d'Azun

An adventurous walk above the Pas d'Azun