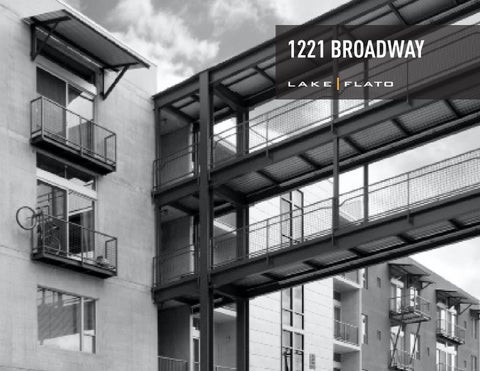 Since 2004, a vacant and heavily vandalized building shell occupied a high-profile site at the convergence of Interstates 35 and 37. Once referred to as “Ghost Town,” and described by the San Antonio Express-News as “the biggest homeless shelter run by the homeless,*” the complex had become a site of criminal activity, ranging from theft and vandalism to burglary and assault.

The neglected property was eventually auctioned on the courthouse steps, and the new owners saw the potential for these three city blocks between the urban corridor of Broadway Street and the San Antonio River to become a revitalized hub for River North. The challenge for the design team was to creatively adapt the existing superstructure into the new ownerâ&amp;#x20AC;&amp;#x2122;s vision and program. The western block of the project connects to the San Antonio River; the eastern block, with frontage off the main urban corridor of Broadway Street, will contain retail and office space on the first floor and housing on levels two through four.

To achieve the transformation of this urban living compound, the adaptive-reuse construction of 1221 Broadway took shape in two phases: phase one to renovate the existing 300 apartments and five courtyards, and phase two to renovate retail and office space in the Broadway building on the eastern block. Phase one involved re-skinning the existing building and making windows larger to allow more natural daylight in the apartments.

The floor plans of twenty-eight different unit types—including studios, one-bedroom lofts, and two-bedroom lofts—were completely changed from the previous owner’s designs. In addition, the five-story parking garage was finished out and roofed, and retail and restaurant space on the street were restored to help revitalize Broadway as a new pedestrian corridor.

The connection to the five courtyards and to the outdoors creates both a unique oasis and urbane street presence. These courtyards link urban living with nature, and provide outdoor activity and gathering spaces. All circulation is outdoors on single-loaded cantilevered walkways linked by bridges over Avenue B and alleys to the garage.

The project has served as a catalyst for nearby urban redevelopment and neighborhood revitalization. Located on the edge of downtown along the San Antonio River, with an underserved residential and commercial district to the north, 1221 Broadway is uniquely positioned to reconnect these disparate parts of the city and bring residential life to the downtown area. Along with the complete makeover of an abandoned superstructure, a B-Cycle station, River Walk access, and a frequent taco truck further enhance this project as a vibrant urban living area. 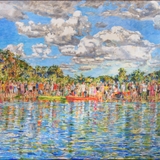