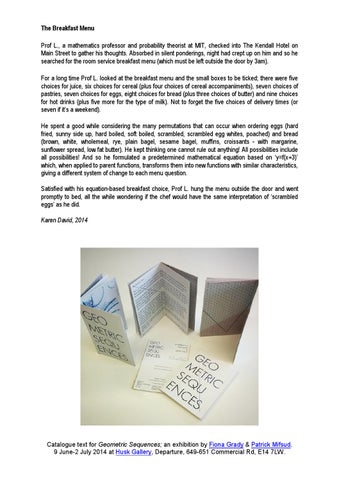 The Breakfast Menu Prof L., a mathematics professor and probability theorist at MIT, checked into The Kendall Hotel on Main Street to gather his thoughts. Absorbed in silent ponderings, night had crept up on him and so he searched for the room service breakfast menu (which must be left outside the door by 3am). For a long time Prof L. looked at the breakfast menu and the small boxes to be ticked; there were five choices for juice, six choices for cereal (plus four choices of cereal accompaniments), seven choices of pastries, seven choices for eggs, eight choices for bread (plus three choices of butter) and nine choices for hot drinks (plus five more for the type of milk). Not to forget the five choices of delivery times (or seven if it’s a weekend). He spent a good while considering the many permutations that can occur when ordering eggs (hard fried, sunny side up, hard boiled, soft boiled, scrambled, scrambled egg whites, poached) and bread (brown, white, wholemeal, rye, plain bagel, sesame bagel, muffins, croissants - with margarine, sunflower spread, low fat butter). He kept thinking one cannot rule out anything! All possibilities include all possibilities! And so he formulated a predetermined mathematical equation based on ‘y=f(x+3)’ which, when applied to parent functions, transforms them into new functions with similar characteristics, giving a different system of change to each menu question. Satisfied with his equation-based breakfast choice, Prof L. hung the menu outside the door and went promptly to bed, all the while wondering if the chef would have the same interpretation of ‘scrambled eggs’ as he did. Karen David, 2014

Catalogue text for Geometric Sequences; an exhibition by Fiona Grady and Patrick Mifsud at Husk Gallery